Thank You Sir, May I have Another!

Wow...Two posts in one day. There's too much going on out there to cover it all! It surely must be a gathering storm...

In a stunning display of why certain religious groups should have their tax exempt status revoked, Catholic Archbishop Raymond Burke called for the "banishment of gay-supporting politicians". Ouch, that hurts worse than a ruler to the knuckles... 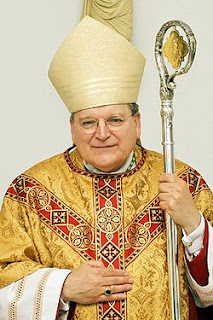 Speaking at InsideCatholic.com's 14th Annual Partnership Dinner, Archbishop Burke is quoted as saying: "neither Holy Communion nor funeral rites should be administered to politicians who support abortion or same-sex marriage. To deny these is not a judgment of the soul, but a recognition of the scandal and its effects. … It is not possible to be a practicing Catholic and to conduct oneself in this manner."

This quote was explained as being a shot at the funeral of Ted Kennedy and his support of rights for GLBTQ peoples. I guess Mr. Kennedy got in just under the ecumenicle wire...whew! Its also a digg at Boston's Cardinal Sean O'Malley who attended Mr. Kennedy's funeral. How tacky is it to attack the deceased and those who went to pay their respects?

..."to deny these is not a judgment of the soul"....Oh Really...What the heck is it then? Oh wait! I know!....Holy extortion, thats what. Now any political leader who happens to also be of the Catholic faith will have to chose between his concience and his faith. I believe that freedom to worship is an important right and if Archbishop Burke choses to withhold his blessings thats his business...but...when you make a public announcement and direct it at our government leaders you have crossed a line and are attempting to influence government with religious coersion. I believe Mr. Kennedy would have respectfully ignored Archbishop Burke.

I really really try to refrain from going on the offensive when I hear of Religions behaving like this. I believe that most people who can rub two nuerons together and spark a thought can separate out that The core of Christianity has absolutly nothing to do with what People like the new Pope and Archbishop Burke are doing with their positions of power. I believe there are people of Concience in all faiths. But therein lies my problem here. Its no longer o.k. with the Catholic Church to live your life from a place concience, you must now march lockstep with the party line. How much longer before the call simply removes the word "politician" from the above statement and embraces everyone of the Catholic faith? Should you really be denied last rites because you attended a gay wedding? What if the grooms returned your gift? (har har) Will Straight individualls be prohibited from supporting their Gay family members under threat of excommunication? The same individualls that want to bring religion into the halls of power, wouldn't be so gung ho if Muslims where getting elected and transfering their faith tenets onto our government. How about if a budhist requires everyone to meditate on the buddha for an hour everyday? My point is not to vilify these beliefs but to point out that the same people that espouse that our government was founded on religious faith would consider it the end of the world if any of those example occured. It would be armed revolution.

So...The Catholic church is throwing its weight around again, and with that much jewelry on, I wouldn't want to be standing in its path. It seems that as the question of gay rights gains ground, the more overtly hostile religions are becoming. "culture war" they call it. What a sad way to spend our spiritual lives. I think we need to send a message to our elected officials that whatever religion they practice is entirely fine by us, but that it is a private and personal matter that has no place in the offices of government,or they simply will not be representing us any longer. Thats the way the system is supposed to work... and that, is for everyones protection.
Posted by GFV at 10:23 AM