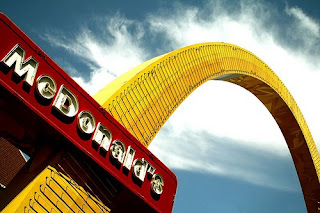 I saw this video and smiled remembering a day when I WAS that kid...scared to death of discovery. For  a really brief moment I felt like someone out there understood those moments that many of us have when we are young. It was all the more extraordinary for being aired in France...a country that is having its own debate about homosexuality. It was odd that this was the way that McDonalds would chose to reach out to the gay community. Surely it would be part of a much larger international marketing campaign right?.....wrong. This touching and inclusive commercial was deemed too contraversial to air in America. But Why is That? How is America so different?

In a interview with the Chicago Tribune, McDonalds Chief Operations Officer, Don Thompson gave his rationale....on behalf of McDonalds...as to why the add will never see air time in America:

Tribune: A French TV ad featuring a gay teen and his father has stirred some controversy — not there, but here. Can you talk about that?


Thompson: It is an example that markets, cultures are very different around the world. (For instance), I've never shied away from the fact that I'm a Christian. I have my own personal beliefs and I don't impose those on anybody else. I've been in countries where the majority of the people in the country don't believe in a deity or they may be atheist. Or the majority of the country is Muslim. Or it may be the majority is much younger skewed. So when you look at all these differences, it's not that I'm to be the judge or the jury relative to right or wrong. Having said that, at McDonald's, there are core values we stand for and the world is getting much closer. So we have a lot of conversations. We're going to make some mistakes at times. (We talk) about things that may have an implication in one part of the world and may be the cultural norm in another part of the world. And those are things that, yes, we're going to learn from. But, you're right, that commercial won't show in the United States.

Tribune: How has it done in France?

Thompson: Interestingly enough, there have been no negatives coming out of France. The brand is a local brand and different things will occur in different parts of the world. We just have to make sure that we understand the impact one action may make on another part of the world.

Odd...I would consider not showing the add exactly as imposing your own value judgement about the add on the rest of the America. If you in fact you are not the judge and jury for right and wrong then why is this add been deemed wrong for American viewers. Even if it were not a personal decision on
Thompsons part...as these sorts of marketing decisions often aren't....then a roomfull of execs still sat around the table and collectively decided that Americans would revolt if they were shown a gay person on t.v. Haven't we come farther then this by now? 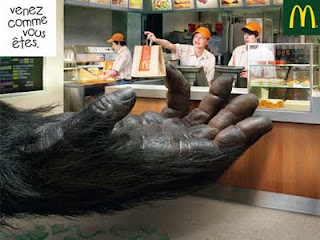 Mr. Thompson makes a statement about McDonalds core values yet makes not mention about what those are specifically, leaving us to read back to his statements about his own faith and how certain messages have "implications". This would lead the reader to believe that he is presenting his own views as that of McDonalds....which, may not be 100% accurate, but also may not be far from the mark.


Heres some "implications" for the fine folks in McDonalds board room. I am a gay man legally married to a man that I love dearly. Together with our children and the ones we are fostering, we have five children who crave chicken nuiggets like vampires crave blood. By making the decision that showing gay people in your adds is inapropriate for America, you have just said the same thing about our family....which makes you a very unhappy meal in my book. I no longer care to feed my childrens nugget cravings with a company that sees my family as inapropropriate or controversial. Which is just fine by me  because I already have enough happy meal toys to fill the Grand Canyon. Please don't pander to us with advertisements to be who we are over a burger and fries and then shun us for taking your offer. 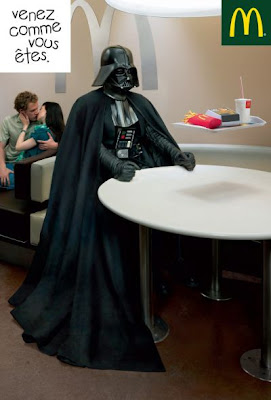 McDonalds is a big company...they can exclude whoever they want and any fallout will not dent their bottom line much...but is that really the point? Isn't it more that we are beyond the point when seeing gays and lesbians on television results in letters to the station programmer and/or boycotts? I believe that McDonalds knows this, which leaves me wondering why they considered this too hot for Americans. Surely the handfull of protests they have recieved in the past can not have affected them that much. this add is just a kid conflicted about coming out to his father....its real life, whether some people would prefer to pretend its not so. Some kid in Nebraska may have seen this and for 30 seconds NOT felt like the only gay person on the planet.
In the absence of any other logical reason, all that can be deduced is that McDonalds CEO's themselves are uncomfortable with the adds content...Mr.Thompson being one example. Its too bad really...they have missed an opportunity. While they have pegged France as progressive and America less so, they have come to show just why America lags behind. Its not America as much as it is a generation of men that now sit in boardrooms and political offices who are too busy following trends to make one. Catch up with us Ronald McDonald.
for a few brief seconds I saw myself reflected on television in a form that I could identify with, and that has been labeled "not o.k.". Could this not have run during Glee or something? I go as I am everywhere.... But if thats too much for McDonalds to handle, my kids can get their ultraprocessed and pressed, chicken-like products elsewhere. 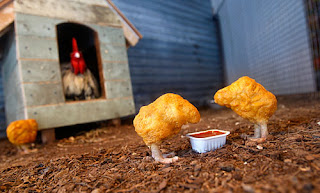