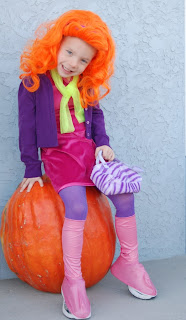 
So a few weeks before Halloween, Boo decides he wants to be Daphne from Scooby Doo, along with his best friend E. He had dressed as Scooby a couple of years ago. I was hesitant to make the purchase, not because it was a cross gendered situation, but because 5 year olds have a tendency to change their minds. After requesting a couple of more times, I said sure and placed the order. He flipped out when it arrived. It was perfect.


Then as we got closer to the actual day, he stared to hem and haw about it. After some discussion it comes out that he is afraid people will laugh at him. I pointed out that some people will because it is a cute and clever costume. He insists their laughter would be of the ‘making fun’ kind. I blow it off. Seriously, who would make fun of a child in costume?

(It also needs to be interjected at this point that his best friend in school is a girl and she wore the same Daphne costume to school.)

And then the big day arrives. We get dressed up. We drop Squirt at his preschool and head over to his. Boo doesn’t want to get out of the car. He’s afraid of what people will say and do to him. I convince him to go inside. He halts at the door. He’s visibly nervous. I chalk it up to him being a bit of a worrier in general. Seriously, WHO WOULD MAKE FUN OF A CHILD IN A COSTUME ON HALLOWEEN? So he walks in. And there were several friends of mine that knew what he was wearing that smiled and waved and gave him high-fives. We walk down the hall to where his classroom is.

And that’s where things went wrong. Two mothers went wide-eyed and made faces as if they smelled decomp. And I realize that my son is seeing the same thing I am. So I say, “Doesn’t he look great?” And Mom A says in disgust, “Did he ask to be that?!” I say that he sure did as Halloween is the time of year that you can be whatever it is that you want to be. They continue with their nosy, probing questions as to how that was an option and didn’t I try to talk him out of it. Mom B mostly just stood there in shock and dismay.

And then Mom C approaches. She had been in the main room, saw us walk in, and followed us down the hall to let me know her thoughts. And they were that I should never have ‘allowed’ this and thank God it wasn’t next year when he was in Kindergarten since I would have had to put my foot down and ‘forbidden’ it. To which I calmly replied that I would do no such thing and couldn’t imagine what she was talking about. She continued on and on about how mean children could be and how he would be ridiculed.

O.k....first things first..I need to say that "Boo" did rock that Daphne costume. He was the spitting image. I give him total props for being an awesome Daphne...check it out...

Here's my issue with the view points of Moms A, B, and C....first, as Sarah mentions in her blog, there is the unspoken allegation that she is encouraging her son to be gay by allowing him to wear this costume...a notion that she calls "idiotic". And I have to agree with her. If our kids costume choices represented some budding psychological potential then we would all be in trouble. I went as a vampire for Halloween when I was a kid...and surprisingly I still have not developed a taste for blood. Also, My son went as Harry Potter this year, does that mean he will develop the ability to use magic?...and what about my daughter who went as a witch...whats that say?

Presuming that Sarah's account is true, and that mom's A, B, and C's concern was that Boo would come under ridicule for his costume choice...and given that no one did have an issue except mom's A, B, and C... then I hope that the kids of These moms do not end up absorbing their mothers disapproval and become bullies A, B, and C someday.

So Sarah blogged about it...after all the title of her blog states quite clearly that a "cop's wife does not remain silent". Speaking as a cop's husband I know this is true. Being married to someone in law enforcement means learning to hold your own or be tried and convicted before the accusations have been fully read....(I say that will all love and respect to my husband who is now probably shooting daggers at the screen)...

Up to that point Sarah's blog had only been read by family and a few friends. Indeed, most of her posts revolve around the funny stuff her kids say. I don't think she expected her account to reach beyond her personal circle...but it did..and big time. It hit every gay blog and news outlet and eventually ended up on CNN..which brought in a psychologist to berate her for "outing" her child...

So whats to out? The kid is five...even if he someday comes across this picture when he's fifteen I don't think Its gonna be the damaging event this guy predicts. If anything I think It would be an incredible statement of support to read that your mom loves you no matter what...don't you? Plus...given the nature of the web, this story will be long dead before anyone who goes to school with this boy will get old enough to care. AND FINALLY...don't all parent's keep a few embarrassing photos of their kids around for eventual "first date blackmail"?...I know I do. Those kids are gonna get uppity someday and you need to have something to keep them in line. Instead of merely presenting the story as is, CNN's choice to have a phychologist on hand made the implication that something may be wrong with her decision. This set a bad tone before anyone even got any one said anything.

By the first line of her blog rant you already know that "Boo's" mom has got her sons back no matter what... That's love. She very clearly understands that a Halloween costume will not influence her son to be gay if he is not. she also clearly gets that at this age most kids have no real awareness of sexuality. I don't think "Boo" does either. It was all just fun, pretending to be a character he loves from a favorite show.

My final question/observation about this story  is this...What if it had been me that had allowed Daniel to go to school in this costume?..even if he repeatedly requested it? Mom's A,B, and C are already in a tizzy because Sarah...a straight mom..allowed her son to dress as a girl for Halloween. They intimated that she was encouraging him to be gay by her choice. If a gay parent had done the same thing It wouldn't be a case of intimation and innuendo..it would be outright accusation that I was trying to raise Daniel to be gay.

This is one of the things that you face as a gay parent. How much are people looking at my kids and just expecting them to be gay because I am. After all...they expect their kids to be straight because they are. Both assertions are invalid but they are on the minds of countless parents whether or not they remain unspoken. As a gay parent, you always have the awareness that you are being watched in that manner. Never mind that fact that gay people predominately come from straight parents, or that the children of same-sex families more often than not grow up to be straight.There is an erroneous idea out their that we somehow engineer our children's sexualities. Even though anecdote and scientific fact have puzzled out the mystery to tell us that we don't. Shucks!...and we would have gotten away with it too if it wasn't for those meddling kids and their inborn sexualities!

I don't know that I would have had the courage to allow my son to go to school in that costume. Perhaps that's my weakness because I really look up to this mom for standing by her son in this manner. I want both my children to know that they are loved no matter what. straight or gay plays no part in that. That said, I want to protect him from the bad that I know is out there too. That's were I think Sarah was stronger than me. "Boo" made the choice..she had the courage to see that choice through. I'm not sure that I could have done the same....besides, the way Daniel like to eat he would most definitely been Shaggy... 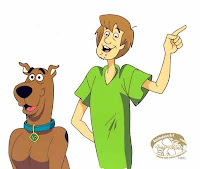