Will We See A New HRC? 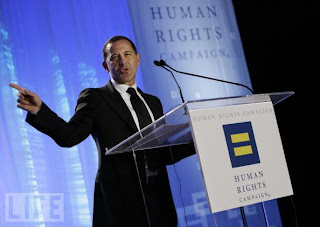 This morning, one of my favorite blogs, Pam's House Blend, broke the story that Joe Solmonese of the Human Rights Campaign will be resigning from his post as director of the organization. This would be the first in a series of executive staff shakeups that could change the face of the HRC as we know it. This actually comes as quite a shock to this humble blogger who has made his fair share of grumbles about the HRC and Solmonese's over-capitulation to the White House on gay issues. Time and again they have been completely unwilling to apply even the tiniest bit of pressure to affect change in an administration that on the one hand claimed to support us while the other hand was busy enforcing anti-gay policies with gusto.

Solmonese's defense was that having a place at the negotiation table was more effective than chaining yourself to the white house fence ala Get Equal style. And yet what we saw in return for our donated dollars was HRC staff attending high profile cocktail parties at the White House where they would walk away with a fist full of promises that never came true....and the guys who chained themselves to the fences and rattled politicians cages on the news seemed to be the ones actually getting the job done. It made the HRC look weak and Solmonese like an ineffective elitist more content with rubbing elbows with the rich and powerful than actually lobbying for LGBT rights. It is little wonder that HRC's reputation has taken so many fatal hits and if Solmonese's reported resignation will be able to bring it back from the brink.

Whatever your feelings about the HRC. This recent development seems to beg the question, "Will the HRC change?" Lets explore that possibility...

Dissatisfaction with the HRC has been brewing for some time and the reason why it has been dubbed "Gay INC." is more due to it's monolithic disconnect with the average gay, bisexual, or trans person for whom they are meant to represent. It seemed they were becoming too big and too well connected to care for the people who were sending them their hard earned dollars in exchange for a voice in the oval office. For my memory, whenever the fight for Don't Ask Don't Tell or the state by state marriage equality fights were at their worst...such as in the recent loss for marriage equality in Maine...Just like our Presidents support, the HRC was no where to be found. They expressed no support for the state fights unless and until they were called out for not doing so and even then their response was minimal. So when New York failed to pass marriage the first time around, and Maine's bid for marriage failed, the DADT repeal was hanging by the thread of infinite and objectionable "studies", and the white House was defending DOMA with very discriminatory language, people began wondering just what the hell the HRC was doing and why we were all giving them money. Their was also the huge backlash when they decided to put a gift shop in Harvey Milk's old camera shop in the Castro. AND....when things did go well for the DADT repeal and the HRC stepped up to take credit for it...no one was having it. The HRC has a serious p.r. problem on it's hands.
To which Gay people of color and the Trans community are completely unsurprised amd will echo a chorus of "I told you so's". Both have long ago given up on the HRC as an organization that represents them. The lack of racially diverse members in their leadership has been pointed to as one reason why  HRC seems tone-deaf to these communities. And the Trans community has felt thrown under the bus on multiple occasions...not the least of which was when the HRC was quite o.k. stripping transgender inclusive language from the Employment Non-Discrimination Act. Many lawmakers balk when the bill includes Trans people, often siting the infamous "bathroom argument" as a reason why trans people should not be considered for workplace protections and instead of going to bat for the Trans community, the HRC has o.k.'d removing trans inclusive language from the bill as an effort to encourage it to pass...an effort that has so far yielded no fruit and turned the HRC sour for many Trans people.
Now, with Solmonese stepping down, the big question of whether or not a senior staff shake-up will change the way the HRC does business is on everyone's minds. The fact that Solmonese is leaving before his contract expires in March seems an indication that their may have been internal pressure to do so. As an organization that has taken so many p.r. hits of late, nothing short of a complete restructuring is likely to yield a change in the way HRC is perceived by those who have come to distrust them. Will a new executive matter if the org itself has not learned it's lesson?

Will we be able to depend on the HRC to bring funds, volunteers, and media resources to bear when Maine puts marriage back in the ballot in 2012 instead of wining and dining White House politico's? The next time I have to demonstrate for marriage here in  California will I rub elbows with an HRC employee/volunteer? The next time they want to removed Transgender inclusive language from ENDA because people use fear to mischaracterize transgendered people, will the HRC step up and defend them who have long fought beside us? In short...will they leave the Ivory tower of Washington and reconnect with the very people on whom their survival as an organisation depends?
I think we all hope so. Creating a face that is acceptable enough to earn a seat at the table does not necessarily earn the respect of those seated there. Nor does it help lawmakers grapple with truth of the LGBT community...even when those truth's are inconvenient and/or complex.
If Solmonese's early departure signals an awareness on the part of the HRC that their current strategies are ineffective, then perhaps their is hope. I also hope they take the hint and include more faces of color and Trans people in leadership roles because it has a great deal of fence mending to do and acknowledging the parts of our community it previously ignored as a liability to success would go a long way to reestablishing some credibility, and most importantly...unity. the fight for marriage equality, the fight to repeal DOMA, the fight to secure workplace protections for all, the fight for Trans rights, and the fight for critical funding for HIV prevention and care are really one fight. That is the fight to be treated as a human being worthy of dignity and equal treatment under the law....as a full American. It is the struggle to make that more perfect union that President Obama referred to in his address most recently, a reality.
And yet we also need to keep our defiance. It has it's place. Having a place at the table and coming to that place with respect for the process is vital...on that, Joe was correct. However, what do you do when that doesn't work? That seems to be the question that the HRC could not credibly solve that led others to believe that they did not want to solve it. There really were no consequences if Obama or the White House reneged on their support, delayed, or just plain lied. In that, the Get Equal protesters who chained themselves to the White House fence taught us all a lesson and possibly saved the day during the DADT repeal. that lesson was our anger and defiance has a vital role to play and sacrificing it for the sake of acceptability only hurts us. But we also have the responsibility to use that anger wisely in order for it to retain it's impact.
the degree to which the HRC and its new director can acknowledge and integrate these realities within itself will determine their effectiveness as a lobbying org and our willingness to put our trust behind them again. That trust translates into donated dollars and in turn, the long term survivability of the organisation. It's a lot of change to hope for and a great deal to read into the resignation of one man. And it needs to be acknowledged that it has never been the fault of one man. What has happened with the HRC is systemic and developed over time. However,  I hope that the HRC can become something great and live up to the promise it sells daily in gift shops around the nation in the form of that little blue equals symbol. It is not a symbol of what we want or even what we are fighting for...it's a statement of what we are...and we've come to say it out loud.
Until next time dear readers... 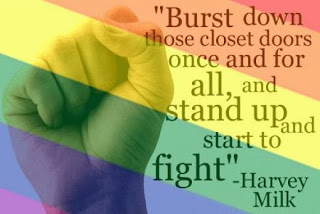