On Cynthia Nixon and Balancing The Kinsey Scale 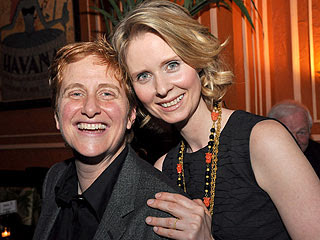 We've all heard the same tired, worn-out "Being gay is a choice" arguments before. We have heard it from religion when they want to characterize being gay as sinful, we here it on television when those same religious viewpoints are used to reinforce political ones, and we here it from out parents when they are looking for something...or someone...to blame when we come out to them. After all, if it wasn't for our reckless choices or that person who "recruited" us into being gay we would all be straight. Right?....Right? Um........Anybody? I'm being absurd here but the notion that we woke up one day and decided to be gay...or worse...yielded to some form of temptation has led to the emotional and psychological torture of thousands of LGBT people.

Yet not everyone stands with both feel planted fully in the "gay" or "straight" camp. Each persons individual sexuality is a shade somewhere between those two polarities. Alfred Kinsey defined a scale numbered 1-6 with "1" being exclusively heterosexual and "6" being exclusively homosexual. Now...most of us fall somewhere along the length of this line with few of us being on the extreme ends. For myself, I would place myself at about a 5.5. And...as someone who fought his orientation tooth and nail, I see that as an inborn part of myself I could not change if I wanted too. Yet there are those who disagree...

Cynthia Nixon, who did an incredible job of standing up for marriage equality in New York has recently come under fire for comments made in a New York Times article in which she defines her sexuality as a choice. Nixon is currently engaged to be wed to her longtime girlfriend Christine Marinoni after a previous marriage to English professor Danny Mozes. This change is not so unusual, many of us come out later in life or perhaps we sit a little closer to the center of the Kinsey scale and have attractions to both sexes...as seems to be the case with Cynthia. there issue here is not whether or not Cynthia was being completely honest to her experience of her own sexuality...but in how her account of that experience gives ammo to those who claim that homosexuality is simply a behavior that can and should be changed. Nixon's comments to the NY Times leave a lot of room for debate and heated opinion:


...... “I gave a speech recently, an empowerment speech to a gay audience, and it included the line ‘I’ve been straight and I’ve been gay, and gay is better.’ And they tried to get me to change it, because they said it implies that homosexuality can be a choice. And for me, it is a choice. I understand that for many people it’s not, but for me it’s a choice, and you don’t get to define my gayness for me. A certain section of our community is very concerned that it not be seen as a choice, because if it’s a choice, then we could opt out. I say it doesn’t matter if we flew here or we swam here, it matters that we are here and we are one group and let us stop trying to make a litmus test for who is considered gay and who is not.” Her face was red and her arms were waving. “As you can tell,” she said, “I am very annoyed about this issue. Why can’t it be a choice? Why is that any less legitimate? It seems we’re just ceding this point to bigots who are demanding it, and I don’t think that they should define the terms of the debate. I also feel like people think I was walking around in a cloud and didn’t realize I was gay, which I find really offensive. I find it offensive to me, but I also find it offensive to all the men I’ve been out with.”

There is a  part of me that understands where Cynthia is coming from because we have all heard the arguments(that often come from gay people) that bisexuality isn't real. As if it's just a "phase" they are going through on their way to being fully gay. And while some gay men and women do refer to themselves as bisexual for a while until they become for comfortable with their homosexuality....utterly rejecting the notion of bisexuality seems crazy to me. In rejecting the experience of others, we do to them the same discrimination toward them that we seek to end toward ourselves. It is a failure of empathy.


Additionally, while Cynthia is being totally honest to how she views her own experience I am one of those people who did a double facepalm when I read it. So here is Cynthia Nixon with the ability to feel attraction to both men and women looking to her own experiences and acknowledging that she made a choice to follow the ones that made the most sense to her....I get it. But......the problem lies with the self same bigots that Nixon doesn't want to concede the ability to control the conversation.


See...just as Cynthia won't use the term "bisexual" for herself because she claims they get "dumped on" she is making a conscious choice to use labels or not use labels as they benefit her. The problem is that many of us though we may be sprinkled along the continuum of sexuality don't see our sexuality as fluid. We have found something that feels right for us and in most cases we have had to sacrifice the acceptance and love of our biological families to see that through. We have endured the discrimination and disdain of a society that see us as not deserving of equal respect and legal protection under the law. Those very conditions exist because society still struggles with seeing a gay, bisexual, or transgendered person as someone who did not "chose" to be what they are....and in that choice is the implication that we can simply make another choice to be the opposite, which we all know is not true and kills hundreds of kids through ex-gay programs, bullying, and suicide every year. I do not think it is conceding a point to bigots...even if her use of the word "bigot" may have alluded to a portion of the gay community. It is acknowledging the awful on-going damage that is done to LGBT people every year that at best poisons are ability to accept ourselves and be accepted as a part of our communities and at worst can lead to despair and death. We've seen it happen time and again. 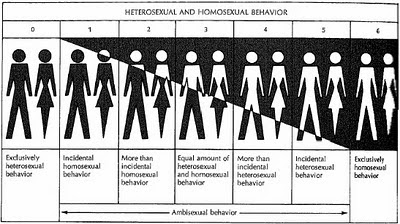 Just the notion of their being a word for people who are predominately drawn to the same sex is only as old as the 1880's when sexual acts and those who engaged in them began to come under scientific scrutiny. Before this time there really was no solid state categorization for a gay person other than "sodomite" which focused more on their acts than an orientation. Even sex in the ancient world  was viewed as an appetite with everyone having the potential to engage in heterosexual or homosexual acts with different cultures having their own separate opinions on those same acts. A wealthy or powerful man could be the aggressive sexual partner to anyone below his station....a women, a young man, or a slave, and suffer no judgement because he was of higher status than them....But, being a passive partner could end in fines or imprisonment...even in the days of early Rome. And yet, it was all seen thought the same lens that we commonly use when approaching an all you an eat buffet. It was all regarded as taste and appetite. I think it is that view of sex as a smorgasbord in which we all pick and choose our dishes that we inherit today and manifests in the idea that being gay is a choice. And while Being gay, Bisexual, or transgendered was seen as merely a choice of behaviors we know a little bit more about sex and biology now to know better. We do not get to chose who we are attracted to...we do get to chose whether or not to follow that impulse.

For a young person struggling to accept themselves, that definition of choice can mean all the difference. I respect that Cynthia Nixon was being truthful in her disclosure of how she experiences her own sexuality. The trouble lies in the fact that not everyone else experiences it in the same way. And in a perfect world her story would be accepted as merely her personal experience and not to be applied to others. Unfortunately, that doesn't happen and a young person reading her comments may take them to heart about themselves and go right back into the closet to pray their gay away a little harder.

I also understand that Cynthia states that for others it simply is not a choice...I don't think anyone is demanding that she change the truth of how she deals with her own sexuality. But we also need to know that the words we use matter. Not only to those who work against us...but to those who one day will be us. I respect Cynthia Nixon a lot...not only for her acting...but also for her activism in New York. She stepped up and put herself on the line to be a face and voice for marriage equality. However, I do wish that she had considered the deep pain so many people have to go through to overcome the notion that we chose to be gay. I do not consider myself a bigot or word nazi for holding that belief...nor do I think less of Cynthia Nixon for hers.