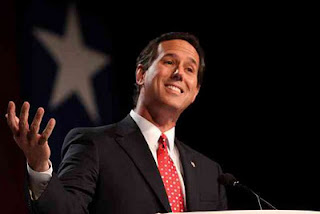 I know it's been a long time since I have written anything. But, that does not mean that it has been an uneventful beginning to the year. The kids are still off for Christmas vacation and my husband has taken off some time to help care for Baby Boy and the others...so our house is full and very busy. Additionally, I have not been so happy with the gay related news these days. It seems like it's all completely wrapped up in the Republican primaries and the insane viewpoints of it's candidates. I have to admit that I am sick of hearing about Rick Santorum, Rick Perry, and Michelle Bachman to the point that I am afraid to even log onto the internet anymore. They are on everywhere, all the dam time...and they seem intent on pushing each other over to prove who is the most "conservative(I.E. against the gays). Case in point...

Via Towleroad and reported by the Miami herald...Rick Santorum wants to be your president...and this is what he thinks of same-sex adoption and children's rights to a safe home:


Citing the work of one anti-poverty expert, Santorum said, "he found that even fathers in jail who had abandoned their kids, were still better than no father at all to have in their childrens' lives."
Allowing gays to marry and raise children, Santorum added, amounts to "robbing children of something they need, they deserve, they have right to. You may rationalize that that isn't true, but in your own life and in your own heart, you know it's true."

Really?...robbed?!...then I have a little story to tell about how Baby Boy came to be in our care this Christmas. Brace yourself and grab a tissue...it's going to be hard to hear...


For those who need to catch up... Baby Boy had been removed from his mother's custody after she was pulled over at 3 a.m. for weaving all over the road and driving under the influence of drugs. Baby Boy was with mom in the car and had two ear infections. He was removed from her care and placed with us on an emergency basis. Flash forward three months and the county has found a local relative willing to take Baby Boy in long term while his mom undergoes drug treatment and the family reunification process. Flash forward another six months and we are getting the call asking us to take Baby Boy back again because of suspected child abuse on the part of this same relative. He was diagnosed as failure to thrive...a fancy term for "he won't eat", scoliosis, possible autism, and even multiple sclerosis. That about catches us up to the present.
This last week Baby Boy has been doing really well. The kid they claimed wouldn't eat?....eats like a horse. mealtime is his favorite part of the day and we joke that he is "little Daniel" because of how much he loves food. He is clear, aware, and responsive even if he isn't using words yet. He can say a lot with grunts and baby talk and he usually does. He laughs easy and loves to play with the other kids. He is a beautiful little boy in every respect and completely different then what he was being cast as on paper.
This week we took him to his first follow up doctors appointment for his arm and they read to me the full report of what happened to him .....When the EMT's had been called it was under the explanation that Baby boy had thrown himself against the wall of his crib and had then gone into a seizure. The EMT's reported bruises on his cheeks and around his ears. His left elbow had been fractured. And there was scrapping in the genital area as well as a small amount of blood. He was taken to the emergency room and from there, flown to Oakland Children's Hospital where x-rays showed that his arm had been broken previously. 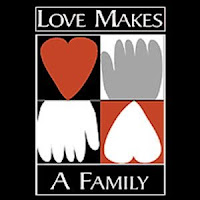 Hearing it all rocked me. The relatives explanations for Baby Boys behavior did not match up with his injuries at all and their explanations for his wait loss and emotional withdrawal weren't matching how he was behaving in our home. clearly something awful had happened to him in that home and hearing it play out made me feel sick. I could not believe all that he had gone through in such a short amount of time. It was like being punched in the gut and I just wanted to pick Baby Boy up and hold him.
The doctor claimed that she was shocked to hear it herself as the relatives had always appeared to be very proactive and involved in his care. They had claimed to be giving him three pediasures nutrition drinks a day in addition to his regular food but that he was not eating. Talking to social workers who supervised family visits told a similar tale of a little boy who had withdrawn into himself, had deep circles under his eyes, and would not interact with anyone. This was not the Baby Boy I had known and my heat broke with every sentence. yet this wasn't some stranger that did this to him...This was his family.
So I would like anyone who believes that same-sex parents are more harmful to kids than letting them be with families like these to tell me how they justify that. As Rick Santorum believes that having gay parents robs them of something...what about the time this two year old has lost to fear, neglect, and violence? A piece of his childhood has been stolen from him. He has seen far more than any child should and you can see it in his serious little eyes.
For all he has been through, Baby Boy is doing well, though he has further to go. He eats a lot, he laughs, he plays, and he loves with an open heart. All things that should be a part of a child's life. I think it's amazing that he can do that. I think in part it is because of his age...but I also think he's a pretty strong soul. What he has been through makes him a very serious little boy. he has had to learn to be very cautious and his life has held no gaurantees. but in spite of all that, his heart is intact and when he smiles and giggles its like the sun shining through. For all he has been through...Baby Boy is going to be OK and I don't intend on letting him go again. Mr. Santorum can consider that a theft all he wants...I consider it restoring to Baby Boy what should have been his already...a childhood filled with love, safety, and happy memories. That is what being a family is all about and that...is what I know in my heart is true.
Until next time dear readers..... 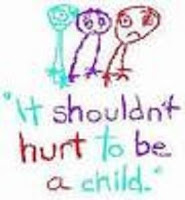