When the news first hit the net there seemed to be a nearly unanimous expression of joy as if something long awaited had finally happened and I have to admit that I felt it too. Here was out President, who has long dodged the marriage equality question, come out for it in an unequivocal way. It was positive, definitive, and there was no way to spin it later on down the road into something less than flat out support for marriage equality. This was not the President Obama I am used to and I was shocked. I knew that he had drawn a line in the sand and clearly defined which side he stood on and that would then force everyone else to take their own sides. Which of couse they did...

Immediately, Fundies heads exploded. Here was the damning proof they wanted so badly that the President was out to destroy America and the family. Every single anti-gay voice immediately went into their shrill cries of "See! I told you so!". Rick Santorum stepped out of the wings to decry the Presidents statement...as well as Maggie Gallagher, and Ann Coulter. Tony Perkins was on CNN in less than twenty four hours stoking the flames of fear and paranoia through a crocodiles smile. And Mitt Romney, the presumed Republican Presidential nominee...and who is known for saying whatever is politically expedient...had his own condemnations to offer. With details of Romney's anti-gay bullying past emerging, and his promise to NOM to support a federal marriage ban, Romney was almost compelled to take the opposing stance to Obama's. It seemed tailor made for him and handed on a silver platter.

And yet it's the President who is being criticized for "politicizing marriage"....as if it wasn't before. I don't think there is a one of us reading this blog that hasn't known that gay rights has always been used as a  political football since the beginning, no matter the protections in question. Republicans long ago took a stance apposing gay rights of any kind....and Democrats may be more bark than bite...but they were traditionally thought of as being friendlier to the gay community. We have always been aware that any freedom....ANY freedom...we have one has been born of a political fight...even something as simple and humanitarian as funding research for HIV, a disease that affects the entire world. No group who has ever won their freedom has done it without having their lives subject to public debate and the machinations of the political machine. So for conservative politicians and pundits to claim that this sudden "politicizing" is a recent development is utterly false and I gotta believe that they are desperately hoping that no one will notice the decades in which they have been politicizing the lives of gay, bisexual, and transgendered people. Don't look behind the curtain...or you will see that the wizard is a sham. And while your at it...don't look in their closets either.

But beyond the hoopla, I wonder what the practical effects this announcement will have. As it's been called "historic" and "a game changer"...how will this translate into actually effects. That one is a little harder to answer being that I left my psychic powers in my other pants I can only guess. However, there was one immediate effect. Politics not being a profession filled with the courageous, few stood up for marriage equality fearing fall out on reelection. Yet, in the week since the announcement, other senators and congressman have made their own statements of support. Whether thats because they felt pressure to support the President and follow his lead or because they finally felt safe offering their personal viewpoints is impossible to tell....but that there are more and more voices in support is building a groundswell that we could not have purchased with all the money in the HRC. The statements by the President and other Washington notables remain only words....they have not yet translated into the passage of a trans inclusive ENDA, the abolishment of DOMA, or the end of the deportation of binational couples, but making such a stand does come at a cost to them and during the election we will see how that plays out.

This is one reason why even a large number of gay people are wishing the President had waited a little longer. Taking such a stance for marriage equality polarizes him and gives him a weakness that conservatives can exploit in their opinion. However,....in my opinion only....taking that view ignores how polarized and divided out polical process already is and how demonized President Obama has been for the last four years. No other president has had to put up the blatant racial comments that Obama has. For example the cartoon of him and Michelle Obama as terrorists in the white house complete with turbins and semiautomatic rifles....or the ones of Obama with a bone in his nose. No one has had to put up with the constant questions about the legitimacy of their citizenship and their birth certificate. And if that's not enough we can all remember the histeria surrounding the health care reform and accusations of government run "death camps". All of this is off the rails crazy without a shred of proof, but none of that matters to the conservatives and tea partiers who have done their damnedest to turn Obama into the greatest evil man has ever known. In my opinion...taking a positive stance on marriage equality isn't going to alter the way these gays already think about Obama and anyone in the middle never believed that B.S. anyway. President Obama has never been able to catch a break...giving them something real to cry about won't make that any worse. At least it gives him the benefit of begin seen standing up for the rights of other Americans when it's long overdue.

Which brings me to my final point....was the President's support sincere? First came Vice President Joe Bidens remarks that he personally supported Marriage equality, then came the White House dragging him in by the ear and calling him to the carpet. Biden then apologized for speaking out of turn and held another press conference reiterating that the Administration did not share in his remarks. THEN....not a week later the President makes his announcement and we all gasp and cheer until it comes out that his hand had been forced by Bidens initial statements. (whew!...that's a lot of he said she said)

So when would the President have given his full support to marriage equality if he hadn't been forced to? After reelections?...ever?  This is not the first time that the President has been under pressure to support an issue and not give in. During DADT he either stayed silent, dodged the issue entirely, or expressed tepid support until people began to chain themselves to his fence. Why does this issue differ in that he feels compelled to answer it? The most cynical side of me would say that it's to ask for campaign support, funding, and votes to get him reelected....the part of me that want's to believe better of people hopes that his account of changing his mind after talking to his daughters is true and that his change of heart is genuine. However.....

Regardless of how this came about, it's here and I think it's an incredible positive that we can and should be grateful for....as well as use to the fullest. My hope is that the President's support will translate out into support from others who will follow his lead...and more movement on ENDA and DOMA in President Obama's second term. Perhaps the public can also come to a greater understanding of this as a civil rights issue and not a "special rights" one as conservatives would spin it and make it that much harder to reverse any changes that any later lawmakers could attempt. The Presidents statement was historic and for myself...I am grateful that he came out and said it. It does make a difference. But now it's time to roll up our sleeves and turn this fantastic development into action. We are still evolving. 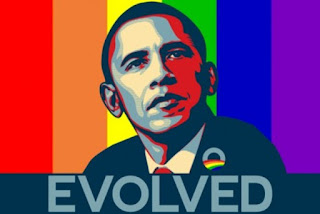