For Turks and Travelers 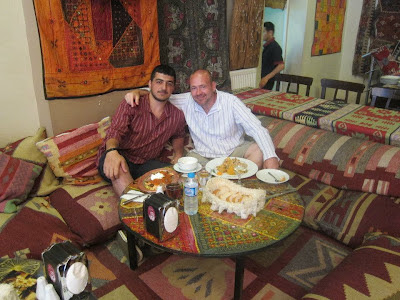 Hello Everyone....I am back to make up for my lack of a post last weekend. As many of you know, my husband Jay has been overseas in Turkey to support a friend who has had a really awful year. The fact that I did not post last week was called out by my husband who very politely commented that "My Turkish fans were looking forward to my post this week.".....and by "Turkish fans" he meant himself. So this post is in part for him and in part a stream of thought about what happens when you make connections with people beyond the bubble of your everyday life. Sometimes those  journeys take us on planes miles from home, and sometimes we go farther than any plane can carry us with just the click a mouse. Often. it's not the journey itself that is as remarkable as the people you meet along the way because they make the road worth taking. Will you take a short journey with me?

This is the first time that either of us has traveled anywhere without the other and have to admit to a few sleepless nights this week. Especially on the first night when all I did was stare at the ceiling and imagine him somewhere over the Atlantic. In order to take our minds off of things I have done my best to fill our days with fun things for the kids to do....bike riding, pool time, movies, visiting family, playdates, and  t.v. time cuddled up in our bed....but it still feels as if the time has gone by so slowly. It's ridiculous right?....I mean it's only a week. However, I knew that Jay is having tons of fun. As he uploaded pictures of his adventures to Facebook I say a man who I haven't seen in a very long time....vibrant and alive with a twinkle in his eye. I remembered him from long ago when we didn't have a house under water, a stack of bills to pay, and more responsibilities than we can sometimes manage. It made me smile to see him again. And yet..this week has left me feeling like the steward of a ship with no captain.

People asked me lots of questions about how I was going to hold up on my own for the week managing the kids by myself? As if the workload will somehow magically double and the kids become too much to handle alone. "We will be fine" is my polite answer but inside I am wondering how they think I get along everyday anyway? Jay often works nights and evenings and sometimes sixteen hour shifts that see him leave at four in the morning and returning at midnight. It's already my everyday job to take care of the house and kids on my own.
But on those days I always know that at night, jay is going to curl up next to me and when I wake up in the morning he will be there. It's funny how you can be dead asleep but yet your body will wake you up at three AM because it knows that something important has not happened that was supposed to...like that empty space in the bed that stayed empty tonight.

But the oddest question that I have gotten about Jays time away was often not posed to me as a question at all.  In mentioning to people in my life that Jay was going away to Turkey they would often get very curious about why he was going there and why he was going alone. Simply explaining that he was going to "support a friend" we met though Youtube never seems to be an adequate explanation. The unspoken question being why is my husband overseas with another man who to them seems a stranger. To which I then feel compelled to explain the sequence of events that has taken place in our friend Tallats life. How he was outed to his family, intimidated, assaulted, and nearly killed because of it...and all because he was merely seen to be friends with us on Facebook.

What takes me aback is that even after explaining all of this to someone I will still get a look that includes raised eyebrows as if even those events are not enough to warrant a plane flight to the other side of the world. It bothers me a bit that people still view the friendships with people we make online as if they are somehow suspect or less than a connection you would make with a person who lives nearby? I keep asking myself if it is too many differences for people to accept?  Another country, another side of the world, another religion away and suddenly it's all to strange to be relatable?

But what people don't get is that if someone sent them a letter saying "I didn't kill myself because you helped me find hope...how would they not have trouble wiping the tears from their eyes. And then to discover that the person reaching out to you is one of the kindest, gentlest people builds a stronger connection and so you start talking to each other. You get to know each others lives, families, and struggles until you start to forget that they live half a world away...they might as well live at the end of your street. You become friends and then maybe find ways to spend time together....perhaps video gaming online or skyping. And then some bad happens like when Tallat was shot and all I could do was sit impotently by filled with rage and fear waiting for someone to contact us and let us know if he was alive or dead. He wasn't some humanitarian effort...he was our friend, he was in trouble, and sitting behind a computer screen was maddening when all we wanted to do was  race to a hospital to make sure he was ok. Today, I am kind of regretting my decision not to go with Jay because one day when I do meet Tallat I want to give him such a big hug that it will crack ribs...and then I will probably cuff him upside his head for a few things too.

So, when family or friends look like they don't get it I wonder what it is that seems so strange to them. I believe that if it was them having those experiences that they would be boarding the next plane to Istanbul too...and urging the pilot to hurry it the hell up. If we can't realize that the distinctions we draw between each other count for absolutely nothing...whether it's gay/straight, race, religion, gender, age, culture...than we have such a long way to go to ever see the world as we hope it to be. We drew the lines between "us" and "them" we can undraw them dammit. I know it's not really that simple...but neither is it that hard. The internet has gone a long way to helping us undraw those lines by letting talk to people we might never have had the chance to meet, sometimes be entertained, sometimes cry, and sometimes lose out hearts to them. It's only human.

Very soon Jay will be boarding another plane to travel an entire day to come home to us. I will spend one more sleepless night imagining him somewhere over the Atlantic and he will probably be excited to go home and sad to leave the time he had with Tallat in Turkey behind. I know I would be. And Tallat himself will probably be in tears and wondering what life will be bringing him next not knowing that his adventure is only just beginning and that there will be more times and memories to make that he would never want to be without. He is a part of our hearts and a part of our family and he can count on that.

This post is for Turks and Travelers because it is for them. My heart and prayers are with both of them tonight and I wish them safe travels and I look forward to wrapping Jay up in a big hug and never letting him go again though I would never have taken this experience away from him for what it gave to both him and Tallat. But journeys are like that, you step out your door...or onto the internet...and you never know where your steps will take you. Thanks for taking this journey with me.