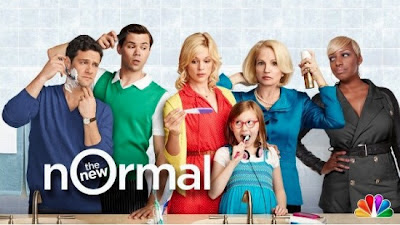 
First...the background for those who may not yet have seen the show...

That was a great clip because it did a good job of giving you an idea of the characters and a loose idea of the plot. David Murray and Bryan Collins are a gay couple who have decided that it is time for them to build a family...for which they chose surrogacy. Goldy Clemmons story is a little more complicated. at the beginning of the series she walks in on her husband having sex with another woman. It is this act that causes her to take  her grandmothers car with her daughter Shania and just drive as far as they can go. The grandmother...Jane Forrest...is portrayed as homophobic and racist and in total denial about both of these traits. The final member of the core cast is Bryan's assistant, Rocky, played by NeNe Leakes of The Real Housewives of Atlanta. Events conspire to bring Goldie into David and Bryans life as their surrogate birth mom with the first episode ending in an "Is she pregnant or isn't she?" cliffhanger.

So first off...the show is written just like Modern Family. The comedy is exactly the same right down to the camera pans. The grandmothers bigotry is so over the top that you constantly find yourself asking, "who would say that out loud?" It's hilarious in the context of the show and the dynamic between the grandma and the grand daughter and Rocky are, so far, my favorite elements of the show. Like most Network comedies these days I sometimes fail to see the humor because what the person is doing is so blatently stupid...which happens alot on Modern Family. So far this show hasn't done that and so I can go with the jokes instead of being left behind. BUT...heres were I struggle...

I understand that the show is a comedy. The people are meant to be over the top...I get it. But when you call the show the "new normal" that is sending a message to America that, that is exactly what this is...a more accurate depiction of family life in America. The problem is...it's still not. This show is WAY more comedy than it is commentary. The Characters on the show are more characters with exaggerated traits than they are real, living and breathing, people. Goldie is portrayed as beaten down by life and yet hopeful stereotype of the single mom, the daughter is the deadpan comedic relief. Rocky is the new Karen from Will and Grace, and the grandma's bigotry is way over the top....all of this adds up to funny in most circumstances but the show's efforts to create believable characters that you can sympathize and identify with are being shot in  the foot by the exaggeration of those traits.

For example...one of my pet peeves about portrayals of gay people on television is the use of stereotypes. When networks chose to show us they often use the same devices over and over. They are afraid that America can't take us just how we are and so we have to be caricatures. So far....and in my opinion only...this show is not turning out to be any different. The gay couple is very stereotypical....affluent and upwardly mobile gay men with an expensive home and the unlimited budget to shop. They portrayed one of them  as feminine and the other as masculine therefore, setting one up as the male role(husband) and the other as a female role(wife) because thats all America can digest.....that bothered me a bit. For a show called  "The New Normal" then seem less interested in portraying that than in reinforcing old versions of normal. I.E...all families need a man and a woman, all gay men are label conscious shopping addicts with high paying jobs,  expensive homes, and teacup dogs. 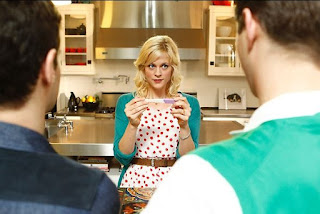 Are there families just like that?...Hell yes there are and it is not my intention to talk down about anyone who's life looks just like there's. My problem is that, that image is all that network television is ok with because it makes America laugh at us...not always with us.

Which brings me to the surrogacy issue. Why that? Not all same-sex households build their families that way. It's a majorly expensive option that not all of us can afford. And it is shown so much in shows with gay characters that I think it leads people to believe that we shop for babies like they think we shop for clothes. This is further backed up by a scene in the show when they are choosing potential mothers and talking about nothing but looks and making "no fatty" jokes. That is a horrible message to send...not only to America at large but to anyone. Our kids are not teacup poodles or fashion accessories and the way this show portrayed that decision making process made it seem like that's exactly how we come at it. I was not happy about that at all.

I love my kids. They are not biologically related to me in any way...but they are no less mine. They come from my heart just as if I had to carry them myself. I do not now...nor have I ever needed little carbon copies of myself in order to call them my kids. As Goldie says in the show...love is love and its that love that makes a family. This is a fact that I hope the show develops more fully as it progresses.

Which brings me in closing to the title of this show. Just what the hell is the new normal anyway? There is no "new" normal....Period. In altering what we call normal, there is only acknowledging life as it is actually lived by real people everyday, in ways that are more accurate and authentic. There is nothing new about that. All it is, is dropping the idea that "normal" is Ward and June Cleaver....that was always a fantasy that wasn't even "normal" when it first aired. But because it was what everyone strived to, we accepted it as "the way it should be". This, even though single parent families, divorce, remarriage, and adoption have been a part of the America family structure for generations. So what is new here exactly? Nothing is changed but that fact that it's two men. That is the "new" they are trying to sell....and I don't much appreciate being a product, even if it does raise the notion of same-sex families into a greater public view. That's just me. 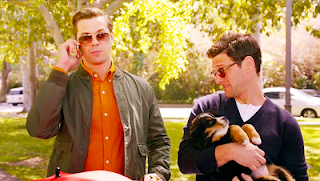 The notion that we are "new" still sets us apart...and the fact that Hollywood and Network TV still stubbornly clings to the notion that gays are too scary for the American public to take just as we are frustrates me. And yes....I know there are many people out there who have zero exposure to gay people for whom this show will be an eye opener...and maybe a heart opener. I don't discount the positive of that...or the fact that a gay family is now the primary focus of a prime time television show...these are all good things. I just want America to know the real us...that there are gay people all around them living normal lives and just wanting to live and love like anybody else. We aren't all doctors or designers....sometimes we are Taco Bell drive through servers and your mechanic. We don't all obsess about our looks and shop at "barnies"...in fact on look at me proves I've never set foot in a Barnies. We are not divided up into neat little "butch" and "femme" boxes. We are often the person you pass on the sidewalk without a second thought and this show does nothing to get that across.

I am reminded of the stories I Heard from Nichelle Nichols(Uhura) of Star Trek. She had the chance to meet the Reverand Doctor Martin Luther King, who was a fan of the show...at a time when she was considering leaving the show. He told her(and I am paraphrasing) he wished she would stay with the show because for the first time in history, a black person did not just have a role on television...but an equal role.  Is that what we have here?  A gay couple that is the primary focus of a major network television show?....is that what Cam and Mitchell are on Modern Family...an equal role? Perhaps...But as a member of a same-sex household with kids, I still don't look at that show and say, "And that's who we are." I can't yet say that.

I am glad to see shows on television that not only show gay couples...but gay families as well. Regardless of whether I agree with the show...or even see my family reflected there...I am happy that the ice is being broken. And in spite of my jaded preconceptions about the show, it made me laugh at times. Despite myself, I did get drawn in and was left wanting to see the next episode....that's got to say something. Perhaps in the future the gay people we see on TV will be a little less safe for mass consumption and little more like the real deal but until then....I will just enjoy it for what it is and remember...it's just television....Right? 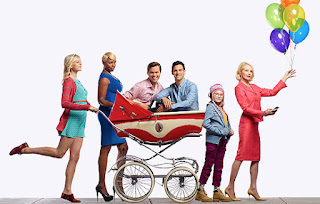