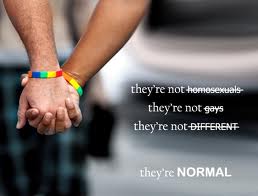 There is something on my chest that I need to get it out.....and...I know that in expressing my opinion of this issue I may be completely wrong. that said, here we go...

This last weekend our family had the privilege of attending a showing of our movie "The Right To Love: An An American Family" at the LGBT Community Center in San Francisco. All in all I like going to these events because I always get to meet great people and because a movie may reach an audience that may not use YouTube. This particular showing was no exception as it was well attended and everyone we met were great people. In the Q and A portion of the event we all had a great discussion about how the movie can open conversations with our straight friends and family...and how important those conversations are to have. It was at that point that someone stood and and expressed how they felt that our family was a good bridge between the gay community and a conservative straight community because they felt  we were "just so normal".

I can't explain it but this just did not sit well with me. I felt like normalcy was actually being used to exclude others who didn't live up to some imagined standard. Now...I know that one of our stated goals with our YouTube channel is to show the world just how "normal and boring" our families(note the plural) are. And furthermore, that is the message that the gay community has to the world...that we are just the same as any one else. But the feeling I had, as I sat in the middle of a city that has so many types of gay people...each as worthy of the civil liberties we are all collectively fighting for is...who is defining that normal? Who are we leaving out in the cold when we establish that some of us are normal and some of us are not. Isn't that exactly the same kind of thinking that we are fighting against in endeavoring to achieve equal protections and opportunities as LGBT people in a world that has historically branded all gay people as "not normal"?

Bear with me and lets talk this out....


After the Q and A was over and everyone filtered out into the reception area, we continued to talk to individuals who continued to express versions of the same idea. "Thank you guys for being so normal!" To which I would smile and not as inside I was thinking, "Um...ok. What does that mean to you?" After hearing it once from the stage I could just laugh it off, but after a few more encounters with people I began to get concerned that we no longer putting a face and a name to an important issue....or helping people understand that their dreams of family are achievable.  Instead perhaps, people were taking our story as a statement that this is what acceptable "gay" is...and I don't hold with that.

For the record, I appreciate what everyone was trying to say and to a certain extent there is some truth in the fact that the movie was filmed and directed by a woman from an evangelical family and geared to reaching out to people who live in those same evangelical communities. It was meant to be a conversation starter and hopefully, an eyeopener that puts a human face on an issue for people who may not know a gay person or realize the impact that their votes can have on our lives and families.

As for our YouTube channel...we have tried to be more of a window than a bridge. Just a view into what it looks like in a day in the life of a gay family...and the only family who's story we can tell...our own. The hope we had when we started out was that other families would speak up and make just one video that showed the world another face and another flavor of what being an LGBT is. I guess that I had hoped that our first video would have sparked something like the "It Gets Better" video series. Then when people went to the voting booth for Prop 8 they would have been armed with the faces and names of the people for whom their vote was going to most effect. If they were going to support taking away the right of our family to be legally married....they should at least know who we are and that we are just like their families in almost every respect. They should have to remember my children's face as they cast their vote. I think that's only fair considering how that played out.

And just for myself alone...I was a person who went through a hell of a lot of bullying growing up. It is one of the reasons why I wrote my love letter post some time back. For most of my life I had been made to feel small, weird  and unwanted. I was small and very skinny, loved cartoons...Star Wars, And didn't like sports or girls...all of this adding up to the kiss of death for me. It was a very long road through those times and I hated myself from the inside out for many of those years. It took a while for my to understand that the qualities that made me feel different we also contained in others...that we each had something that made us outside of the norm, it was only that some people hid it better. I learned over time that what we embrace as normal, usually isn't and as a consequence, I learned to embrace my geekiness as a strength and not a liability. I was normally abnormal and that was alright. I guess that is a part of why those words made my heart ill at ease because I don't think there is only one right way to be, to be considered a valid and valuable human being.

We are only one family trying to put a face and a name on a topic that for many people in America is only about a "radical gay agenda."...whatever the hell that is. but as the word normal was being thrown about, I began to wonder if a transgendered person would fall under their definition of "normal" as they were presenting it....as an inroad to a community that normally has not accepted us. Would a gay person who never intends to marry or have kids fit under that definition....someone who does drag?....or all the oiled up boys and girls on pride floats?  There are so many different faces and stories in the LGBT community that are just as effected by discriminatory ballot measure as families like ours and just as much a part of the story we are trying to tell. And  the more I heard the same thing expressed, I began to wonder if our diversity was being forgotten. Because in my opinion, if it is what we are doing loses it's meaning. If they only reason people will vote for us is because they think we all live in suburban homes with picket fences, have 2.5 kids, and go to church on Sunday...then what have we really accomplished? Is that kind of an inroad really worth it? 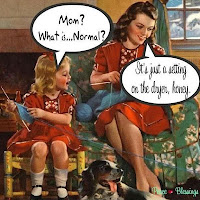 I think that my husband is with me on this, but I am speaking largely from my own point of view. So I am owning this for myself and I know that I may be totally over blowing it all. However, it has something to do with why we foundationally do what we do. When we say that Gay Family Values...it isn't to present a false ideal. We chose that term to remind the world that LGBT people value love and family as much as the people who would use the term against us....not to present some unrealistic view of us as the gay  Cleavers. I don't think people get that.....Cause' June Cleaver I am not.

For all the reasons given above, I do not...nor have I ever considered myself "normal". I feel that is for good reason if it means I have to be something other than who I am in my most authentic self.....or that it means that people just like me are shut out of the conversation because their lives don't look just right to others. So often I have seen that word used to hurt. I grew up thinking that gay people were "not normal". I was taught they were scary and bad only to find out that I was one of those people. In the process of dealing with that was also discovering that those I had been brought up to fear where the same as me....just people trying to live their lives as best they could in a world that does not accept them. And so...we have all lived and built the best lives that we can with what we have been given...for all of us that result will be different.

so tell me what is normal because I don't believe in that word so much. I believe in putting our faces and names into the struggle for our rights because only then will people understand that we are their sons and daughters, brothers and sisters, we are fathers and mothers with children of our own. Not some faceless entity with a scary agenda. We just want to live and love as equally as anyone else and it  has already been a hard and long road getting here to have this marriage equality struggle...and to have this opportunity for conversation and growth.

So there it is...for me, the only normal is that we are all of value in our similarities and our differences. When we try to portray only a narrow spectrum of LGBT life we are not actually building a lasting foundation for acceptance for us all. That people like the way we look on the outside is less important to me than the fact that they get to know a face and a name to hold in mind as they go to a voting booth and vote on the rights of people just like me(on my birthday no less). They should have our faces in mind as they mark their ballots and know what they are doing to other Americans and their families that are no less then theirs. I don't know if we are building a bridge in that regard...but I sure as hell hope that we are that window of understanding. 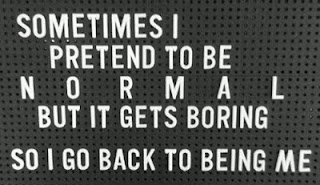