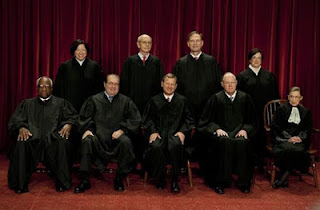 And to be fair...I know it's important that this happens but as I absorbed the news, more questions began to present themselves and the reality set in that this could have a major impact not only on the rights of the gay community as a whole...but also on my marriage. I began to have that feeling in my stomach that you get while cresting a hill on a rollercoaster....that slow ratcheting ascent until that awefull pause at the top before you drop. As I sit here, feeling the subtle tilt of gravity beneath me, I cant help but have a few questions and wonder where all this will end up.
First....Why these cases? There were quite a few cases to chose from and I have heard a variety of interpretations about why these were chosen...probably the clearest being Towleroads Ari Ezra Waldmans. Summing it up was that...of all the DOMA challenging cases available...this one did not require Justice Elena Kegan to recuse herself and offered a clear cut example of the ways in which DOMA can not only deny a gay couple of federal rights but also place penalties on them that heterosexual couples are not forced to bear...such at the three hundred thousand dollar inheritance tax that Edie Windsor was asked to pay when her wife of 42 years, Thea Spyer, passed away. After a life time of loving and caring for each other, the federal government was treating Edie and Thea as if they had been no more than strangers to each other. Edie Windsors case against the Defense of marriage Act not only offers a compelling emotional argument, it offers substantive proof of the harms that denying federally recognized marriage rights does to tax paying gay citizens.

But Waldman brought up another point and that is the one of Scrutiny. One of the reasons he feels that they court may have chosen the Windsor case is because it would allow them to clear up ambiguity they may have left in past rulings about which level of scrutiny is appropriate to apply to cases involving gay rights and marriage equality. Windsor case required lower courts to address this issue and Waldman felt that addressing the issue of scrutiny may have been an additional draw to selecting Edie Windsors petition. 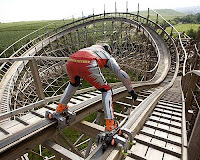 Moving on to Hollingsworth v. Perry....the Prop 8 case. Many of us were surprised to see the court accept that particular case because previous courts had ruled in such a narrow way that any ruling...pass or fail...was thought to only affect California. The court was expected to dismiss this one out of hand. And yet....

Not only did they accept the case...they are taking on a broader question than the ninth circuit found in its ruling:


That success reached its zenith when Judge Vaughn Walker issued a sweeping decision declaring that by discriminating against gay couples, Prop 8 violated the Equal Protection Clause and the Due Process Clause of the Fourteenth Amendment. The Ninth Circuit affirmed the decision, but took a step back from that broad holding, finding only that Prop 8 was unconstitutional because it took away already existing rights.

The Supreme Court is interested in the broader holding. Its order takes as the question presented whether, under the Fourteenth Amendment, California can define marriage as between one man and one woman. It did not limit its consideration of the case to the Ninth Circuit's taking away theory.


In both cases, the court had issues of standing to resolve. The way in which the court phrased it's acceptance of the petitions made it clear that if standing was not found, they would not have to hear that case any further...it would effectively be done there. Some have seen this as the courts way of sidestepping having to rule on the issue of same-sex marriage...a built in way to duck the issue.

So as they information streamed over the Scotus Liveblog yesterday and I saw that these were the only two cases they took...I couldn't find it in myself to whoop or cheer. I could only ask...why these? Perhaps it's a naturally suspicious nature in me but my first thought was to the strategy that these cases represented and just who's strategy was it.....the liberal judges? or the conservative? We waited for so long to hear an answer that I knew that some major negotiating and politicking must have been going on behind the scenes that resulted in these particular selections. They are asking some pretty big questions and in spite of the escape clause they built in over the issues of standing...it doesn't look to me like a court trying to duck a hot topic.

They want to specifically address what type of scrutiny is appropriate to apply to cases involving my rights. They also want to address the question of whether DOMA and Prop 8 violates the constitution. Those aren't small questions. That's playing for all the marbles.

And that's when another thought occurred to my partner and myself. California grandfathered in all the marriages performed during the brief window when it was legal for gays to marry here but it has always been and essential inequality to have some of us married and others legally unable. If the court finds against Edie Windsor or decides that there is no violation of constitutional rights for it's own bizarre reasoning, is there nothing stopping them from voiding our marriage as not legal? That was a very sobering thought that brought further anxiety to the feeling of tipping over the edge and full commitment to this course of action until the end of the ride.

We stand to gain much, but we also stand to lose much. I hope that as the court approaches these cases that they are doing so...not only on the legal merits of each case or the esoteric legal questions they may pose...but also with the awareness that the nation is watching. I know that any ruling they give will also be a statement on the value and worth that they place on me and my family as equal Americans. My husband holds the opinion that  some of the justices may be thinking about how history will remember them. I hope that is true. But I also know that this is the court that decided that corporations are people...decisions made solely on politics are not unheard of as long as the verbiage of the ruling can be tortured just right.

As AFER and HRC applaud the move forward and Facebook messages resound with "Supreme Court here we come!" I am clutching the handrail and trying not to let my anxiety get the better of me. Getting lost in what Could happen is like obsessing about the roller coaster ride... Will we corkscrew or loop the loop? Will we stop at the top of the loop and then go backwards through it all again? No matter what insane twists and turns this goes through, will this be the end of DOMA and Prop 8?...That I can not say. Will I throw up?.....probably. But everyone knows, that once that bar comes down, you are on that ride to the end.

When we sit at the top of that first great hill, I think we all go through our anxieties and say our silent prayers. Then the drop comes and we are too busy laughing/crying/screaming to think about much else but holding on. I'm sure this will feel the same.

If the worst happens and the courts find that LGBT people have no constitutional right to marriage, that states have the right to craft discriminatory bans like Prop 8, and Edie Windsor has to pay that tax....then there's going to be a whole lot of pissed off people. Myself among them.  It would be an utter slap in the face to LGBT Americans and a clear message that we are not regarded as worthy of equal legal treatment. Will we get up again and keep working for equality state by state until the federal government and the Supreme court has to eat that decision...you bet. My hope is that even in a worst case scenario they don't undue the marriages that have already been performed here. That would break my heart on a level I can not even describe. Like imagining that your car on the roller coaster will be the one with the faulty safety bar...or the one that flies off the tracks into a hot dog stand...these are my anxieties for what approaches this coming March as the trial begins.

But just like the fear you feel at the top of the roller coaster...by the time you come to the end you realize that  it didn't come off the rails. In fact, you survived and your kids are laughing their heads off and begging to go again. For all the risk that we are taking...we need to say our silent prayers and then just hold on. It doesn't matter if you squeeze your eyes shut or go to your happy place. For all the fears I feel about the enormity of the decision that approaches, I also need to rememver that we may just make it to the end to walk away, with our shaky knees, into a whole new era for LGBT people. We may even be able to look back on the experience and think it wasn't so bad after all. But right now, all we can do is let go of worry about what might be and hold on tight. Knowing what this means to my family...to the whole of the gay community...can we do that?...Can I do that? Will you be riding with your hands in the air and squealing with glee all the way down...or will you be riding with eyes closed and a death grip on the safety bar? 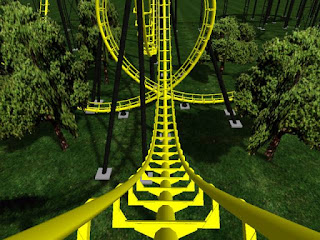