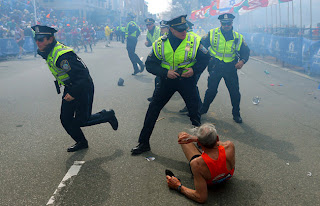 
As you can tell...this blog is more stream of consciousness then  asking a question for which I have a good answer. some problems are simply more complex in their answer then the simplicity of asking the question. Terrible events have a way of bringing out the best in some people and we see that when police and firefighters raced to rescue people from the burning and collapsing twin towers on 9/11. Or in Sandy hook teacher Vicki Soto hid her children in cabinets and tried to mislead Adam Lanza away from them, ultimately being killed herself...and now in Boston were an entire city was galvanized into action by the bombings. Boston, Texas, Oklahoma City...when the worst happens, we often see the best in each other.

Now, I live on the other side of the country, and my heart has been with Boston all week. I find myself wondering if all the divisions that normally plague us on regular days have been put on hold while Bostononians worked to recover from the explosions and then find the men responsible. Whether you are gay, straight, black, white, or whatever.....is there just one Boston right now?...Showing their strength and courage in an event that effected everyone equally. because from my vantage point, that is how it looks.

Whether it is the explosion of a bomb left by a terrorist or the accidental loss of life from the plant explosion in Texas, people are rushing to help each other. We are treating wounded, standing with those grieving the deaths of loved ones and pouring out love and support for each other. And woven into these stories are individual LGBT people who are victims as well as first responders who's lives are as wound up in these events as anyone else. For example Officer Javier Pagan, who is the officer on the right in the picture at the top of this post was present at the epicenter of the first bombing and among the first officers to respond. Pagan, is the Boston Police Departments liaison to the LGBT community and married to his husband Pedro, a retired NYPD officer: 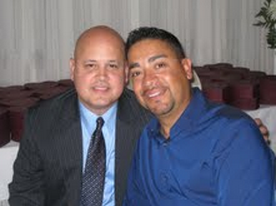 As I have watched events unfold with a mixture of both utter horror at the tragedies that have occurred this week and then with inspiration as I have seen people pull together in support of each other, I can't help but wonder what happens to us all once the dust clears and the public consciousness once again has space to hear the wingnuts come unhinged about gay people marrying, bi-national couples wanting to not be deported, and gay people seeking protections from being fired on the basis of their sexuality alone. Gradually we will return from this tragedy to another conflict, this one internal...."culture war"....and it seems like a lesson in compassion lost.

And just as tragedy can uncover the best in us, so to can it unveil the worst as we give vent to fear and anger. Two seconds ago we may have been helping a stranger we may have never talked to on any other given day because we were all being effected by the same event....and then we shift gears into finding the people who did it and immediately we start looking at groups instead of individuals...like the Saudi man who had been tackled after the blast just because he was middle eastern and wearing a backpack. I don't think anyone expected the bombings to come from two young men from Chechnya...Islamic or not. It seemed so far out of left field. yet, in an instant, the unity that took place in grieving gave way to anger and opened the door to prejudice before we knew what hit us.

All I am asking of the world is, when the dust clears and the pain subsides, to remember the moments when we all rushed to take care of each other and nothing mattered but one human being coming to the aid of of a fellow. Can we take that memory with us when the Family Research Council and the National Organisation for Marriage do their damnedest to make us afraid that America will fail and the world will fall apart if we allow gay people to love and marry equally. Could we short circuit culture war if we remembered there is no "us vs. them"...there is only an "us". Can we treat every day like one in which someone desperately needs our help?

I already know what the answer to that is.....no. Once things settle and people return to their everyday routines, then we forget how little difference meant when the chips were down. Even though many gay people suffered and died as well...and many rushed to help bandage wounds and search for survivors, we will have to return to our homes and our lives and to people talking about us as if we are different...set apart...dangerous..and to be feared. No longer the policeman who pulled you from the wreckage of someone else's hatred and cruelty. The hysteria machine will begin again...but this time when it does I hope we can see that its fearfulness is so much garbage that disappears when the world really does fall down around us.

But one thing we can learn is that we are capable of better. When most days we shrug our shoulders and say, "that's just the way the world is."....we know that's not totally true because we have seen these glimpses of ourselves as so much more. We know who we can be....we know that there are times when our colors, gender, sexuality, and race don't matter as much as drawing together in survival....how can we make that who we are in good times?

What do you think readers...am I being too naive yet again? Sometimes I think I expect too much from the world. but just as we have seen great darkness in humanity...we have also seen amazing moments of courage and compassion. We will never be perfect of our own accord...but we can be better.  These are my thoughts and what I took away from this weeks events...its still a lesson in progress, and there are no easy answers. But now I open it up to you the reader....What do you think? 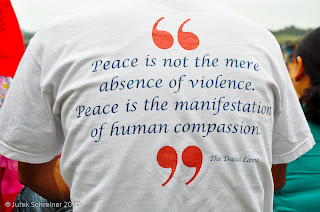