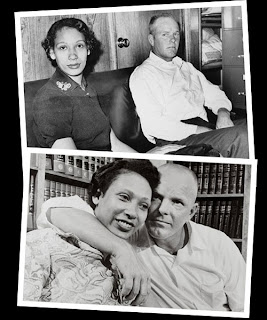 I'm not sure that many of us were aware that the 41rst anniversary of Loving v. Virginia, the landmark case that ruled it unconstitutional to ban interracial marriage, passed just days ago on the 12th of this month. For Mildred and Richard Loving I'm sure that day must have felt like it was a long time in coming. Authorities had broken into their home and arrested them for the crime of merely being of different races and wanting to be married to each other...the year was 1958. After being tried and convicted of breaking Virginia law...again, merely for being married. They were sentenced to 25 years in jail, a sentence that would be postponed if the Lovings agreed to leave the state and leave they did. They returned to the District of Columbia, where they had been married, and began a lawsuit that would change the face of marriage for the entire nation. It took nine long years of court battles that took the long road from state courts to the U.S. Supreme Court...but they won.

In California, everyone expected marriage equality to be a no brainer and yet it has turned into a national courtroom drama that doesn't appear to have any end in sight. Yesterday a federal court gave its decision on whether or not Judge Vaughn Walkers decision on Prop 8 should be invalidated because Judge Walker happens to be gay. In a rather sharply worded decision from Judge James Ware, that answer was "no". However, the very fact that we had to endure yet another trial about a trail (and one that again attacks the integrity of gay men and women), makes think how long the road can seem when you can't see it's end....and how nine years must have felt for Richard and Mildred Loving.


The struggle we have undergone to legalise same-sex marriage does not have an exact analogue in the lives of Mr. and Mrs Loving but it does stand as an inspiration when it seems like the fight has gotten dirty...and when it seems like it has no end.

The recent effort to vacate Judge Vaughn Walkers decision on Prop 8 was an act of desperation from a group of people may realise that their reasons for denying same-sex couples the right to marry has little basis in law. In short, they have no case. What they bring to the table are their religious convictions and strong desire to enforce the status quo...not quite enough to make a case with. It comes as no surprise that a group that would deliberately lie about the effects of same-sex marriage would also recklessly call into question the ability of individuals with inborn traits to be fair and impartial judges even when that case may touch on that inborn feature. As Judge Ware aptly put in his questioning of Prop. 8 council Charles Cooper(AP):

"So if a reasonable person thought a black judge should recuse himself from a civil rights case, that would be enough?"

Cooper response was of course to offer, "No, your honor. To which Judge Ware asked him to explain himself:

"A reasonable person would not consider that black judge, any more than a white judge, for that reason alone someone biased or impartial," the lawyer said.

A reasonable person indeed would have seen that there is little difference in Judge Wares hypothetical scenario and Judge Walkers actual circumstance. But this case is not and has never been about merits. It's been about stopping the gays at all costs and if it means denying black judges the right to judge civil rights cases or even married heterosexual judges the right to rule on cases like this on...that's just A-OK for the protect marriage folks.

It was a desperate ploy and it failed...


So we have overcome one more hurdle....one more trial to determine the legitimacy of another trial that has already gone on to a higher court, where there it is held up on a question of whether or not these same individuals have the ability to defend Prop 8 if the state government will not. We are STILL waiting on the State Supreme Court to answer that certified question they were sent months ago before THIS trial can continue. And if THIS trial does continue...how many more tiers of federal court trials will be retried, questioned, and analysed until there are no avenues left for them to pursue and I am 102 years old....It feels like being trapped in a spiderweb. 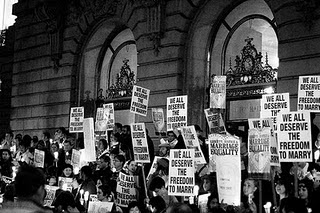 And then...I think of the Lovings and their nine years of legal battles. They were surely not alone in their fight but neither did they have the support of society at large. How many whites and blacks turned their backs on them and considered what they had together as odd and unnatural? More than a few I imagine. And for their opinions they had their religious convictions and the weight of "that's the way it's always been" to justify them.  It is a matter of historical record that they same arguments used to deny them their right to marry each other are the same ones being used against us today:


"Almighty God created the races white, black, yellow, malay and red, and he placed them on separate continents. And but for the interference with his arrangement there would be no cause for such marriages. The fact that he separated the races shows that he did not intend for the races to mix."

Does this reasoning sound familiar?

how long those nine years must have seemed for the lovings as they fought court battle after court battle, and how much sweeter the victory...the relief...at the end. Could they even celebrate it with their families?

For us, todays victory may have been another hurdle cleared in a road in which we can not yet see the end but just because marriage equality may not be a quick or easy path, neither is it without a destination. Three years doesn't seem so long on the face of the struggle the Lovings undertook. One day they were able to finally be man and wife. They were able to close their door and not fear that state troopers would again come knocking it down. One day we can be there too if we remember the importance of Loving. 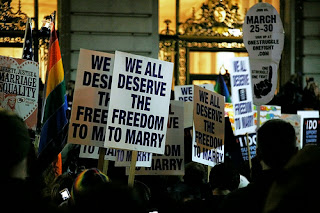