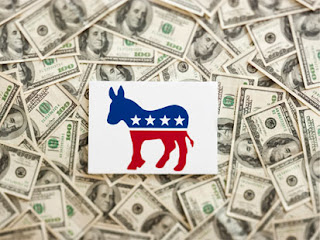 This morning I came across a very interesting article via Pam's House Blend and originally from the Washington Blade that has been making it's way around the blogosphere....In it, the Chair of the Democratic National Committee, Debbie Wasserman Schultz, is quoted as saying that if she were asked to, she would consider spending money to fight the current round of same-sex marriage bans in Minnesota and North Carolina. The implication being that Democrats are taking a stand in those states on an issue they have avoided till now.....and if they will do there, they may continue to support marriage equality in future state fights as well. And by "she" we are talking about the Democratic parties money. Furthermore, she goes on to mention that individual state chapters of the Democratic Party were gearing up to battle these amendments. To which I can not help but think....oh, really?

In her own words:

“I know that the party in each of those states will be combatting them,” Wasserman Schultz said. “And if they ask for our assistance, like any other state party request, we’ll certainly consider it.”

While this is good news....reading this has brought up some old frustrations for me a few things for me. Like....why now? Where was this support for California...or Maine when we all but begged for it? There was NO ONE from the democratic party then speaking out...or even acknowledging those ballet measures. "It's up to the states" was their mantra. In addition I have to ask a question I didn't expect to ever have to formulate in my life....what will this do to growing Republican support?


Before I begin, I need to say that ANY help we can get in stopping the onslaught of constitutional marriage bans in states that are getting nervous about the long term viability of DOMA is welcome. Individual states are rushing to get their own mini DOMA's on the books before the federal version could possibly be overturned just to make sure that no gays can smash cake in each others faces or register at Crate and Barrel. That the democrats want to devote attention to this is wonderful...that means boots on the ground and media resources that would otherwise have to be raised by local marriage advocate groups. It also means that a wider audience hears the message and lends it a certain amount of political gravitas it might not otherwise have had on the chewing gum budgets we have had so far.

That "they will consider it" is a bit puzzling,....since, why would you donate your time and effort to fight these amendments if you weren't planning on devoting the money necessary to do so. Also, her intimations that the Democratic Party, on the national level, would begin getting involved just begs the question.....whats changed? No one from the Democratic Party said a thing to help fight Prop 8...or Question 1 in Maine....yet, now that a few states have marriage equality, others are moving toward it, and the courts seem poised to take on DOMA...we seem to have crossed some magic line where it's no longer such a huge risk to support the gay community. Is this trend toward increasing support for equality on LGBT issues the reason why not just democrats are hopping on board....but also republicans?


Marriage equality passed in the state of New York for many reasons...but one remarkable reason was the support of so many conservative and republican politico's. Very conservative business and state leaders shocked the hell out of everyone and lent their money and considerable influence to what was a very contentious battle. At the time, I wondered whether this had been a sign that things were beginning to shift within conservative circles. After all, this is the very dame political party that has spent decades defining itself against us. For their to be any measure of support let alone the lobbying we saw take place in New York was  amazing and a very hopeful sign......And then the 2012 Republican nominee hopefuls began opening their mouths and all those hopes were dashed.....alas.


But if there was some element within the conservative movement that simply did not care to fight marriage equality anymore...might the Democrats taking a direct hand in state referendums and amendments push those conservatives right back into the mind set of stonewall resistance to anything gay simply because it is now linked more directly with their opposition? Where they might not have cared before could become an issue to fight again simply because the democrats have now taken a stand.....late though it is


Personally, I think that there are enough rabidly anti-gay voices in the republican party that have the national ear that looking for support anywhere conservative is not likely to yield results. The mode du jour is to be the MOST ideologically pure conservative out there and that means promising to roll back any progress the gay community has made since Stonewall. What ever happened in New York does not seem to extend to the republican party at the National Level....and since theirs no love lost there, what ever help democrats can bring to the fight is more than welcome...and perhaps I need to let my grudges about the past go and move with the "evolving" circumstances we seem to find ourselves in.


Is this the beginning of a game changer?....more grand standing on the part of the democrats unwilling to take much risk on our behalf?...or simply more outgrowth of the trend to see gay rights issues as necessary and long overdue?

Since this was heralded this morning as "Big News"....let me know what you think.