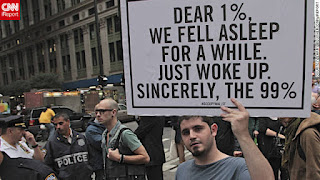 In my humble north bay town of Santa Rosa a tent city has grown on the lawn of City Hall. They are Occupy Santa Rosa. I never thought that a town like mine would see an Occupy encampment, after all....we are not a center for banking or finance. What is there to "occupy" really by a few square feet of grass on the grounds of a  city that it probably of like mind to the protesters. Much has been speculated in our local news as to how long the city will allow them to remain camped out. Everyone talks about what happened in Oakland as if it could happen here. I know that it wont, but everyday I drive by them and wonder that this movement has hit my hometown.

I have been debating writing this post for some time. Partly because it will be unabashedly political, but also because I wanted to wait and see what the Occupy Wall Street movement would become. Lately, it seems it has been in the news for all the wrong reasons and the core ideas that drove so many to protest are becoming lost in divisive and demonizing tactics on both sides of the picket line. I think it's time to weigh in because we as a gay family and a law enforcement family are a part of the 99% too.

It is all of us who do not fit within that top 1% of the wealthiest Americans....ALL of us. Not protesters Vs. police....And thats were I feel the Occupy movement has got off track. The initial days of Occupy Wall Street were very clear in their anger over financial corruption and the governments willingness to bail out corporations, but not the common man. Poor, Working poor, middle-class, upper-middle...whatever name you may give yourself...chances are you have lost a job, a significant portion of your income, your health benefits, savings and retirement funds you relied upon. You may have a home that you still owe more on than its worth...or had to give up and let the bank take it. The same 1% of highest wealth holders in this country can afford to find ways to avoid paying taxes on the actually amounts they earn while those in middle to lower tax brackets shoulder a much higher tax burden. Corporations can now be regarded as people and give as much money as they want to a political campaign. Money and greed are slowly strangling us. 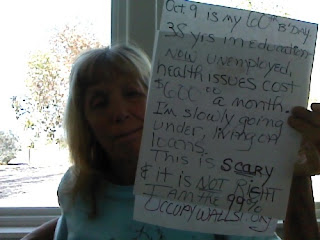 Coming from my parents home which was filled to bursting with the fear mongering of conservative pundits I have come to know for a very long time that Americans are being pitted against Americans. The "Culture war" is as much to preserve the sensibilities of those frightened of gays and the false specter of socialism as it is a handy distraction to keep the bulk of America not paying attention to what is happening to their freedoms and protections.  It is funny however, that no one  began to occupy anything until it started hitting us in the wallet. Vote that corporations are people?....fine. Can't pay your mortgage because you lost your job?....now we have a problem.

When I think of Occupy Wall Street, to me it seems like the public slowly waking up....it is the dawning of the awareness that we have been divided against each other in order to steal our government right out from under us. Even if the Occupy movement amounts to nothing more than a footnote about protesters camping out on sidewalks, it serves as a sign that the awareness of the nation has shifted....and if the occupy movement stalls out here there awareness it fostered will grow until it becomes something larger next time.

But what are we seeing on the news. The Oakland protests....violence...and characterization of the movement as a bunch of angry neohippy college age kids confronting police. All of this played upon by news outlets and politicians that have a stake in making the Occupy movement look like a bunch of angry reactionaries instead of the everyday people standing on dire financial precipices that most of them really are. 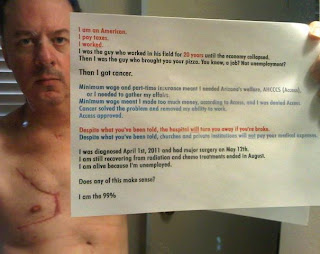 And to all the protestors who see the police as some sort of neffarious arm of oppression...And there have been cases of police abuse. However, there are also many cases of protesters need to remember that most of them are 99% too. In anger over actions of abuse some have come to see the police as the enemy to be resisted when likely many of them would be down there in tents and sleeping bags as well. Just as many police and law enforcement have lost homes, jobs, and health coverage as have anyone else. And not all the protestors who come out for these events have peacefull demonstration in mind. Some come out with the intent to confront. Those kinds of people will be at ANY legitmate protest and they detract from the credibility of those who are really out there to make change because they make it about the spectacle and they make people like my husband out to be the bad guys when he has every right to be right down there with them.

How so?....We own a home we owe more on than it is now considered to be worth. We have tried numerous ways to refinance to alleviate the debt. but there is no program that allows for that given the amount of money that Jay makes...and since the government does not acknowledge our marriage and that Jay is supporting a family of four....that means they attribute all of that income to him. In short, no refinance. Now....we got into this loan knowing what we were doing. We are NOT one of the people that banks lent to with no collateral or ability to adequately repay our home loan. We have been struggling with paying the loan on the inflated price for almost three years now even though the cost of living for our family nearly dropped us into bankruptcy early this year.

Jay's job is constantly under attack. The rash of union busting that has been sweeping the nation has not spared many law enforcement officers. The City of San Francisco is separately trying to figure out how to pay it's bills....and one of the ways it does that is by periodically taking it away from law enforcement officers. Benefits, sick days, and wages are always up for grabs when its time to renegotiate with the city or hold an election. In the last election our family just lost 7% of our income....money we can not afford to lose. What makes this all the more disgusting is that most of the law enforcement and emergency services personnel that the city depends on in the case of an emergency can not even afford to live in the city they service....many commute from as much as an hour away. 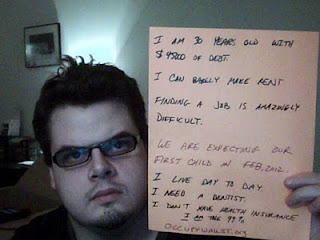 All of this is over and above the hoops that gay couples always have to jump through because the federal government does not recognize our relationship. Tax time?.....don't even get me started about that....

Yet, somehow this has turned from a protest over the corruption of our financial and political system into a stand off between protesters and police. That's not were the true conflict lies and so far I have noticed individuals practicing abuse on both sides of the picket line. I think it's time that we stop looking at each other as the enemy and remember what got us here in the first place...letting banks and mega corporations infiltrate our government and steal it right out from under us.

and for goodness sake people. My birthday falls on November 4th which is usually election day. So I am always reminded about what I need to vote on. It is one thing to exercise your right to pull up a patch of sidewalk and refuse to leave. That;s all well and good. But please....PLEASE....if you want to change the world get your ass up off that side sidewalk and vote. That really cheeses off the 1% 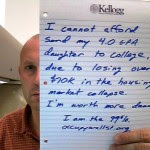