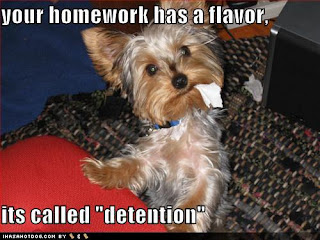 This week was finally report card time for my son and daughter and anyone who's been through grade school can remember the nail-biting uncertainty everyone feels opening up those tiny manila envelopes. Parents want to know that their children are getting the best education possible and that our kids are giving their best efforts in that regard.....and our kids are going through their own anxieties. I remember that report card time in my family meant stress for me no matter how well I did. My mom wanted all "A's" from me and anything less than that was met with a silence that I knew meant "you can do better". That pressure to perform at the top of my abilities was why, when I hit puberty, the first way I rebelled was through my grades. I just did not want to be a smart kid. Smart kids got beat up and were never popular. At least that's the way I saw it then.

Being a parent now, I thought I knew how to set a more loving and affirming set of expectations for my own children. I would not be the pressuring parent. I would let my kids know that my love for them did not hinge on their performance or their grades. It all seemed so clear and so simple....and then I became a parent and all my preconceived notions  were wiped away in the realities of day to day parenting.  I have also been challenged me to rethink how I set goals for my kids....so much for clear and simple.


A part of the challenge is that every child is different. Some kids love to learn, and others apply their intelligence to escaping the process by any means necessary. for example, my daughter is one of those kids who loves to learn and show off what she knows. she was so excited to be like her brother and go off to school and so jealous when she was too small to do it. When it was finally her turn, she hit ground both guns blazing and her reports have always come back stellar...so much so that she can be a bit cocky about it sometimes.

My son Daniel, was very different. He has always struggled against his desire to be social. Every....and I mean EVERY teacher conference and report card made it clear that Daniel was more interested in making and keeping friends than anything to do with school work. After a while, I think that got to him and he stopped believing he was capable of doing any better. I remember picking Daniel up from school one day in third grade, a day in which he had a big math test, and he came out to me all excited and pleased with himself.as he said, "Guess what dad?!...I got a C!".......I admit....a little bit of my mom came out and I got the stone face and said, "Excuse me....a what?!" The fact that Daniel was so pleased with himself was overshadowed by why he was pleased. We obviously had a lot of work to do in helping Daniel hold himself to a higher standard....but I didn't know how to do that without making him feel as if his self worth was in question. Because it never should be. It seemed that both of us had a lot to learn. 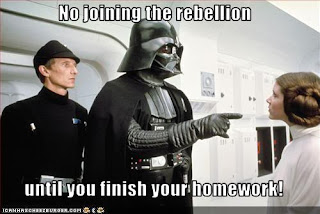 For most of Third grade, Daniels teacher was frustrated with his in class socializing and his grades were suffering across the board. Daniel was also having trouble doing his homework without being held by the hand throughout the whole process and litterally forced to do it. He was doing his best to avoid  it by any means necessary...including tears. Not that it ever worked for him.

It clear to us that Daniel had set a very low bar for himself. It also became a struggle inside myself to help him learn to start giving his best effort without making him feel as if my love for him depended on his grades.Where I always wanted to well to please my parents...Daniel puzzled me by using every ounce of his intelligence to avoid it. I had to drag him through his homework year after year and every teacher conference and report card was singing the same tune..."Daniel has the ability but does not apply himself. His work is careless and he spends far too much time socializing."

We had talk after talk with Daniel about what was expected of him in terms of his behavior and his school work. We explained that we never expected perfect grades, we only expected him to give his best effort...and that we knew this wasn't his best effort. After his joyful proclamation of getting a "C" on a math test we had a long talk that we don't aim for "C"....we may not hit our target, but we aim for "A". Doing your best and falling a little short is way better than doing a mediocre job and succeeding. This was the balance I had to strike within myself between the part of me that wanted to see Daniel succeed and the other part that wanted him to know he would be loved no matter what. And.....We had to be careful never to compare him to his sister...who was daily turning into Ms. Smartypants. It would not have been a fair comparison and would only have created resentment between them. Having these discussions, Daniel would nod his head and agree with everything and commit to trying to do better....and then it would be back to the same old struggle. it was so frustrating and the reason why report card time had become a tense moment for both him and us.

Third grade became fourth and then fifth and nothing changed. It had gotten so frustrating and old for Jay and myself that we imposed a no T.V. and video game summer on Daniel. I know...that's probably banned by the Geneva Convention as cruel and unusual punishment but taking it away for a week or a month wasn't getting us anywhere. In addition, he had to write nearly everyday about a topic we chose. No friends, no entertainment and all work for the summer....it was really no fun for any of us. And then some strange and unexpected magical thing happened.....Sixth grade. 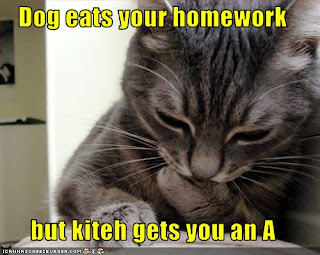 I don't know how...or why.....Perhaps a new maturity kicked in...perhaps the "no fun summer" did it's job. Perhaps the promise of another such summer was the key.... But Daniel totally changed gears. Our first parent-teacher conference of the year we sat down with the intent of giving them the same peremptory speach we have had to give all the past teachers. The one in which we let them know what Daniels tendencies are and that if they had any trouble that we work very closely with his teachers and want to know right away so we can nip it in the bud. Every conference we would steel ourselves for that conversation. So as I finished up my little checkered-history lesson about Daniel to his sixth grade teachers their response was,..."We don't have any troubles with Daniel. I usually only have to remind him once to be quiet and he does it. He's one of my better readers and his writing and math are near the top of the class."

...."Oh.....really?.....Awesome." It took some time for the shock to wear off. After spending three grades struggling, I kinda wondered if my son had been body-snatched. I was happy...and very proud of his achievement....and totally nonplussed over what had changed. Somewhere along the way it became important to him to do better. And while I don't know what made the difference, I wasn't about to look a gift horse in the mouth. We hugged...we slapped high fives...and Daniel glowed.

And here we are on report card day...Daniel got an awesome report, very heavy on the "A's" I am very proud of him. As we have always told him, we don't need him to be a "straight A" student...just to give his best effort and maybe he will discover that there is still more in him that he can give. However, the same struggle still exists in me. Now that he is doing so much better...and we are all patting him on the back....how do we continue to help him understand that we will love him no matter what his grades...AND...that we will still hold him to a higher bar? Today Daniel and Selena are celebrating their achievements....and they have earned them. However, I am still being schooled.

I will keep encouraging them to do their best...and to let them know that they are loved all the time...and no matter what. They seem to know how to do the rest. 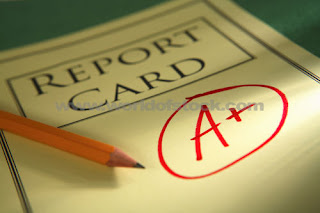