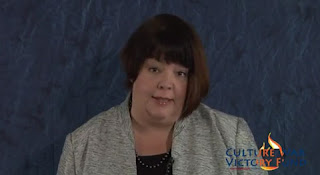 I don't know if anyone has seen the the video floating around from Maggie Gallagher and the National Organisation for Marriage?  You know...the one in which she gives tips on how to talk to your loved ones about your opposition to marriage equality over a heaping plate of turkey, cranberry, and mashed potatoes. You know, I can just imagine it now...."The Turkeys just delicious this year Margaret! Did you brine it?...oh and while we are on the subject...I think gay marriage is totally wrong and the work of homosexual activists bent on redefining a sacred institution to destroy the family....please pass the yams John.......John?....Why is your face so red?. Yams please dear.".....Holiday family get togethers can often be the site of family dust ups but anyone who goes to the dinner table with conversational ammo about their views over gay marriage?...talk about an agenda. Who knew this was something people needed pointers on?

However...Maggies psa about holiday insensitivity does bring up a topic that has long been a challenge for me personally....talking to my family about anything gay. Contrary to what I do on the internet...I am not that vocal in person and some of the hardest people I have ever had to talk to are my family. So lets go there....pass the gravy Maggie...


I have had some rough conversations about gay topics with my family... but I can say that I have NEVER brought it up on a holiday. The scariest conversation I have had on a gay topic by far was coming out. Even though I had been raised and spent my whole life with those I was coming out to and thought I knew their beliefs intimately, I still didn't know what to expect. That conversation I did have to prepare myself for because I knew I would have to stand my ground and I truly did not know which way things were going to go. After that, came a long time of tacitly agreeing not to talk about it anymore. I didn't rock their boats and they wouldn't rock mine. That is...until Jay and I started to pass some milestones that most families celebrate...marriage and children.

Most couples find that announcing an engagement or a new addition to the family is met with joy. Mothers and grandmothers get involved in wedding plans and/or begin planning baby showers....everybody hugs and there is a general sense that something really good is happening. For most, these are happy occasions. For gay couples it's not always so....For Jay and Myself, telling our families that we were going to adopt brought  no spontaneous woops of joy and definitely no baby showers(darn). It actually took our family some time to get used to the idea and they universally had to express their fears that society might reject or bully our kids because of us. But there again...not the worst or most awkward conversation, but also not what we had hoped for.

The worst came when we could actually marry. That seemed to be one step too far for them. I remember being very excited to tell my family the news and I drove out to see my Father and Grandma at the little antique shop our family runs. No matter how excited I was to tell him before I got there, standing in front of him seemed to sober me up. But I told them and hoped. I hoped for a "congratulations"...a smile...some form of positive response. Instead what I got was silence and an....."Do you expect us to be happy?"......"Um...well yes dad. That's what I was hoping for. That's usually what happens when people announce they are going to get married."

No such luck......He then we on to explain about how for his generation this kinda stuff is just wrong and not to expect any kind of acceptance or happiness over it. Inside, I kicked myself because I felt I should have known. I went home defeated and more disappointed than I wanted to even admit to myself. Now...my dad was in my wedding and he voted against prop 8. But he made it clear to me that he was doing it as a favor to me...not because he believed it was right. He was trying to be their for his son in the only way he could and I recognize that.

Then we got involved in the struggle against Prop 8 and we learned that we could not be silent anymore. But....the courage we learned from speaking out in YouTube did not always extend to family. Talking to them about the Prop 8 vote in order to encourage them to vote against it is were my father had some heated verbal altercations. For a kid who learned never to fight with his parents it was tough....I was so scared to put my views out there at all but I had to...my life and marriage were on the line and for them it was just a moral issue. It was infuriating. In order to talk to my family about anything you have to fist work your way past the FOX news talking points...then you get down to the real reasons for why they believe what they do and it's almost always a "Because that's what the Bible says", or a, "That's the way it's always been." answer. Convincing them that their are other points of view is looked on with suspicion. It's almost as if they feel that I am trying to wrest away from them something precious that defines who they are as good people. And what does that make me then?

And there is why I don't talk to them about gay issues in a nutshell...doing so further defines me as different. And I don't want to feel like an outsider in my own family. And everytime I have to hold my tongue I am paying a price...not only to keep the peace...but to not further highlight how I am different from my father who I see so much of myself in...my Grandmother who is my spiritual rock...my brother who I want to be my friend...and all my uncles and cousins...and my mom who I still can not talk to. That fear of not being different has kept me from doing many things I should have long ago....like the fact that our wedding was the very first time my family had ever seen me hold my husbands hand, share a dance, or a kiss...and while I was doing those things with him, I couldn't stop thinking about that. I had to stop myself from trying to protect their sensibilities and remember that this was our day...and that we may never get to have day like that one again. They were just going to have to live with the shock of seeing their son kiss and dance with another man. How lame I feel that those things are what I was thinking about on my wedding day.

And here we are on the cusp of the release of our documentary movie project The Right To Love: An American Family....a movie in which my family agreed to be interviewed for. And the producers of the movie let me know that my family was very frank in their opinions...as I knew they would be. The movie is almost ready for release and we have to opportunity to invite friends and relatives to Skywalker Ranch to preview it. And I don't even want to tell them about it. I don't even want them to see it until I have had a chance to see it and to know what was said. Why am I doing this?...am I protecting them from looking bad? After all, they are grown ups and able to own their opinions. Yet here it will be...my awkward conversations with my family played out on a giant screen for thousands of strangers to see. And here I am just hoping I will even be invited to the next family holiday. They don't read my blog or watch any of our youtube videos so maybe I'm worrying for nothing.

While it has been a very difficult lesson...I can not keep silent anymore. I don't want to hurt them. And worse, I just want to be a who I always was to them before the wall of "gay" came down between us. But the journey of fighting for gay rights has taught me how to speak up and hopefully how to do that with some respect and dignity for others. I know what I need to say, I know how to say it,...and I know when I need to say it. When It comes to gay issues I can no longer work so hard to protect my families sensibilities in order to fit in. Too much is at stake now and sometimes our boats need to be rocked a little.

So Maggie might be the etiquette maven for how to deliver  anti-gay talking points over pumpkin pie but I am not.....and nor do I think many other people are. Talking to our parents about our lives can often be stressful enough that talking about gay issues is just one step beyond possible for many of us, even though we need to have these conversations desperately or we will never learn to see each other eye  Sometimes those conversations are had over mashed potatoes and gravy...and sometimes they can be had just by letting them see you dance at your wedding. 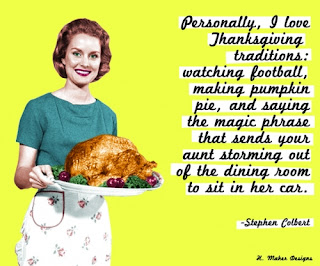