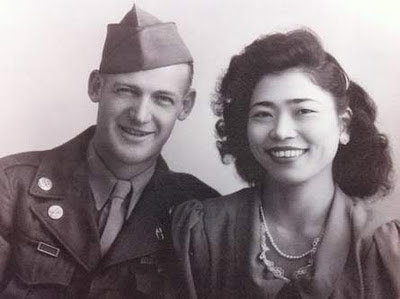 O.K...I began this post yesterday when it was actually in the paper, but real life kept hauling me away from the computer and preventing me from switching into "blog mode". But here it goes again. While this blog is technically a "gay blog" the story I have chosen to share with all of you is not a "gay" story. Yet I felt it was a story that any LGBT person would resonate with...it is a story about sacrificing for love...and it touched my heart. So without further ado...lets give it one more try:

This morning....Yesterday I happened upon an article in my local paper that has touched my heart and I feel it is important to  share with all of you. During these holidays, we all need to be reminded that love is alive and can beat some pretty incredible odds and I think this one fits the bill. The article from The Press Democrat was about the passing of 87 year old Lillian Shizuko and her remarkable romance and marriage to John Berry. She, a Hawaiian born Japanese girl....Him a white American man...both of them find love together in a pre-World War II World. They were different races and from different cultures in a time that tolerated no blurring of the lines...what could go wrong?


The article as I read it in the paper was a bit more descriptive than the online version that I have linked here. but as the story goes, John and Lillian fell in love which did not sit well with her family who did not like her relationship with John Berry at all. Lillian's parents then took her back to Japan only to have World War II break out not long after. However, John promised to find her and as it turned out, nothing as insignificant as a world at war would stand in his way.

Lillian waited and kept watch, always believing in his return. John ran through blood and fire because he knew that it all brought him one step closer to her. As the article states, John landed in Northern Africa with Patton's forces and fought in Italy and Normandy eventually being wounded in the upper chest. Both john and Lillian were not able to contact each other for the duration of the war...but neither gave up hope.

As the war came to a close,, john was stationed in Japan with the American occupation forces there and it was then that he was reunited with Lillian and shortly after, they were married. The two remained together until Johns Death in 1990 and Lillian's recent passing this last November. Theirs is truly and epic love story of the kind you normally only see on T.V.....how much more amazing to know that this really happened in real life.

I read this story in the most unremarkable of circumstances.......as I was getting the oil changed in my car. As I was waiting, I idly picked up an abandoned copy of the paper with no idea of what I was going to encounter. When I read their story it blew me away for several reasons. First, how remarkable was their love and commitment to each other that not even bitterly warring nations could keep them apart forever? And not only war would  have been an obstacle their being together...prejudice and racism  was prevelant and made so much worse because of the war. That alone would have made them outsiders to both their cultures for the simple act of loving each other. And yet....looking at their  picture, I couldn't help but be struck by how young and beautiful she looked...how handsome he was in his uniform. Both of them seem so innocently happy, the love they felt for each other shines right through their eyes.

If only that were all they suffered however.....Marrying John also cost  Lillian her family. Most of her relatives and some of her sibling disowned her for marrying and American man.

As soon as I read that fact I couldn't help but think of how many LGBT people have had the same experience. Fighting against the downward pull of culture and discrimination...oftentimes losing the families that raised us because they couldn't accept doesn't that love care what you look like on the outside or where you come from. That is the cost we have often paid to be true to our hearts and true to love. It was a cost Lillian and John paid in full.

I guess that sometimes I need to be reminded that the struggles that I have come to associate with being gay, bisexual, or transgendered are not exclusive to us. The struggle to acknowledge the truth of who we love  is universal and has been tread by many more than just us. It's simply a part of the human condition that we must one day overcome. Whether it's the color of our skin, the traditions of our cultures, our social standing, our religions, our gender...so many things can keep us apart. But love will stubbornly stand it's ground and patiently wait until we find it in ourselves to look beyond all of these things to the truth underneath and follow that wherever it leads....even through a war it seems.

I do not know if John, Lillian, or their family would appreciate their story being paralleled with that of LGBT people....I can't really say what they would have thought about this. This is only my opinion after having been moved and deeply inspired by them and their love story. This has been a cold winter and reading about how their love for one another conquered all, it warmed my heart and gave me hope for the rest of us.

Love does have a cost....Probably man. It may not always be dodging enemy fire to find a long lost love and it may not mean losing our birth families...but it always means being able to acknowledge the truth of it, even when it takes us places we may not have expected to go. The cost is acknowledging the truth where ever it leads...we must follow. I hope Lillian and John have a special place together in heaven right now because I have found them to be two very amazing and inspiring people. I hope you do too.