Love Passes ...While The Court Dawdles On

It feels so disappointing and wrong to be writing this post on the heels of the last one. The Story of Lillian Shuziko and John Berry had it's share of tragedy...but ended in love and hope for the future. I was glad to post it. Today's story...not so much. However, I am choosing to share it because I do not think there is anything to be gained from not telling it. In fact, I think it would do a disservice to the couple it involves. There has been a slew of Prop 8 related stories this week that...when put together...paint a disturbing picture in my opinion.

This last March, an elderly couple by the names of Derence Kernek and Ed Watson had posted a YouTube video asking the Ninth Circuit court to allow Judge Vaughn Walkers decision on Prop 8 to stand because....after 40 years of being together, Ed Watson's alzheimers was progressing and the couple wanted to marry before his condition worsened. sadly, their plea fell on deaf ears and now, nine months later, Ed Watson has passed away. Meanwhile...also in the news...the Ninth circuit continues it's glacial progress to decide whether or not Prop 8 opponents even have the ability to defend the case before their bench. Also, the issue of releasing the tapes of Judge Walkers initial trial is still being fought over....and Prop 8 proponents are STILL trying to have Judge Walkers decision vacated....again. None of this is moving the Ninth circuit case forward in any way...it's just litigation about the litigation. How silly and absurd this all seems and there just doesn't seem to be any end it sight. meanwhile...couples like Derence and Ed are still caught under the gears of justice as it's broken machine totters on.

Perhaps I'm wrong to be upset by this.....Perhaps it's all a matter of perspective. 40 years ago, When Derence and Ed first got together, there would have been no hope for legal recognition of their relationship at all....not even a civil union. 40 years has seen the world change a great deal in it's opinions of...and protections for LGBT people. But.....does it have to be another 40 before the Ninth circuit does anything definitive?

When will it sink in that this isn't an "issue"?....it's somebodies life. Is our lack of empathy for each other so deep that it is impossible for some to find a common emotional thread with couples like Derence and Ed? It seems like this is just a case like any other on the docket...no different from any other...sandwiched in between jurisdictional hearings and breaking for lunch...nothing more.

I know...the courts are probably still our best bet..and taking it to the ballot again is just as slow and subject to the opinions of a wider public, that equally may not be able to see this in light of real human lives. I should be happy to see anything happening at all. But I think about the narrow window that I had to get married in and the many, many people that did not make it. I sit in a unique position that a lot of fellow LGBT's are not allowed because of the vagueries of law and the opinions others who are not directly effected by it. I think about the insane, insulting, and dehumanizing arguments that have passed back and forth in these hearings and it makes me crazy. And then I hear stories like Ed and Derence's and I just want to cry. 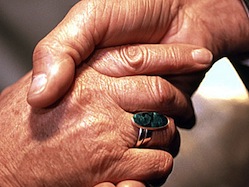 So yes...the world is changing. But, I wish it had changed fast enough for these two gentlemen to say their "I do's". It would have meant so much to them. It would not have changed one wit of their 40 year lives together. It would not have made their love more real...nor changed how they feel about each other. But it would have allowed them to take their place in the world as two people who are an equal part of our common life and culture...in addition to the laws which would have protected both of them and provided for Derence in the event of Ed's passing. What could have...should have...been a celebration of 40 years of life has turned into something else infinitely more sad. What a way to enter Christmas...

But where Lillian and John's story found hope in the fact they got to be together when the world told them it was impossible...so too did Ed and Derence. The courts may not give a dam...nor politicians...but they have 40 years of love and memories that will never be invalidated, vacated, or ever taken away by a vote. Like Lillian and John, they too got to be together for nearly a lifetime and that is the brightest star in the night that can lead us back to hope again. At least.....that is how I chose to see it.

My thoughts, prayers, and condolences are with Derence this holiday and I hope that my readers will take a moment to stop by the video above from the Courage Campaign and leave a note of support for Derence...any warmth and support we can give to each other this holiday season will go a long way.