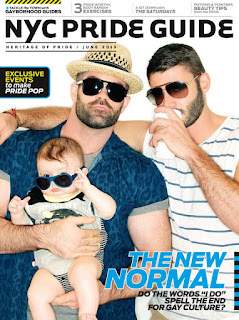 
Even that question itself is perhaps misleading. Same-sex families have been around for decades, we are not a new phenomena. In fact, one of the big eye openers for me when I first came out was the simply massive stroller brigades that marched in the pride parade every year. Family was something I thought I had to give up on when I came out..and yet...here were hundreds of men and women marching down Market street with with rainbow clad children in tow. Seeing them all was a part of what changed my view of what the gay community was as well as changed what I thought my future  could be.  But see that on T.V.?....no way.

In fact, when it came to portrayals of same-sex parents on television....on the rare occasion that this happened, it seemed that two mom's were easier for people to digest than two dad's. Now, I am glad for any example of same-sex families in the media. No one of us can possibly the example for all and so the more we have, the better.

One of the reasons that our family went to YouTube was because there were so little representations of gay families anywhere. Prop 8 was being passed and everyone was talking about how allowing gay people to marry was going to have all sorts of harmful consequences to society...one of which was the accusation that we would indoctrinate children in schools. And to counter this, the campaign against Prop 8 would use the parents of a gay person or a celebrity to counter these arguments....but not an actual gay person...and never once did they show a gay family. It was maddening and infuriating to us. Nowhere could we find examples of gay families...not even somewhere as user driven as YouTube...and we were the ones who were most effected by laws that would not only effect us but out children as well. This is what led us to begin making out videos. And now, several years later we have celebs coming out and starting families, t.v. shows with gay families as central characters, and ad campaigns specifically designed to be inclusive to same-sex families. It is a huge shift from where we were in 2008. 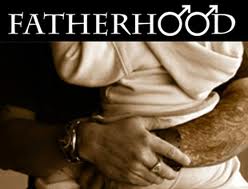 But here is where I have a little axe to grind....

In my opinion there has always been a bias against men as parents for many possible reasons that I can name just off the top of my head. One....people regard women as nurturing and so,  natural fits for parenting. Men....not so much. In fact, when it comes to the way society portrays men as single parents, it's often as bumbling men-children without a shred of responsibility. Whether it's the classic "Two Men and a Baby" to any of Adam Sandlers movies...it's a long running movie gag to drop a child in a mans life and watch him stare at that child like an alien from mars before feeding him twinkies for breakfast while both of them learn to bond while eating silly string and jumping on the couch. And the scene were the guy has to change his first daiper?.....comedy gold. This is how a lot of people think dads parent.

But the not so funny part is that there are a lot of people in the world secretly believe this about men as parents. I see most often in adoption and foster care as babies are readily placed in homes with opposite sex parents but don't readily offer those same children to gay men, instead placing slightly older children with them...or children who might be harder to place. Not that it always happens this way....just that I have seen it happen and it makes me wonder if comes from this cultural notion that women are naturally wired to parent and men are not. There is an assumption in our culture that Moms can change the diaper, put a hot meal on the table, keep up on school and the home while also teaching kids how to be in relationship with others in a way that dad's aren't seen as being naturally capable of. We are seen as having to catch up to those skills.

So when we see cool characters on T.V. that rock the stereotypes or give the world a more realistic view of what it means to be dads with kids it makes us want to stand up and cheer.  Not only are they opening the door for acceptance of gay people, they are also helping to teach the world that dad's are responsible, nurturing adults that know how to put a good dinner on the table once in a while. It used to be such a big deal just to see a gay character in a T.V. show and often that character was single...and most of the time just a side character. It took a while before those side characters where allowed to date. And sadly, it is still a big deal when they show affection. Little by little we have been baby stepping to our way to accepting a gay person as a full human being with a full range of desires, values, and emotions. It only seems logical that having a family would be the next step in that evolution. but just like every other step along the way there has been struggle and controversy. but we are there....and I guess that is a part of what makes it so gratifying to see.

Does it signal acceptance...perhaps by a degree. But no matter how imperfect these representations of fatherhood we may see, or of gay  life and gay families, it is an awesome thing they are there at all...because they sure weren't when I was coming out. And if it wasn't for what the stroller brigade opened my eyes to, what might my life have become?

This year my family was chosen to be one of San Francisco's pride marshals because of our work on YouTube showing our family to the world, hoping to accomplish all that I wrote about above. It will be a completely thrilling and surreal experience. However, I will never be able to go to a pride without remembering the stroller brigade, and the thousands of families that will be marching alongside us on that day.  As much as any character we see on T.V....or muscly dads on magazine covers...I think it's still these real faces that remind us of who we can be if we want to. I hope my family has helped and become a part of that tradition. See you on the parade grounds everyone! 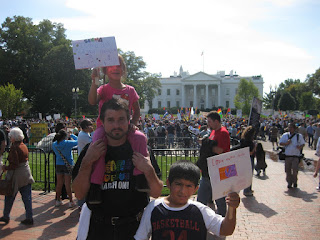