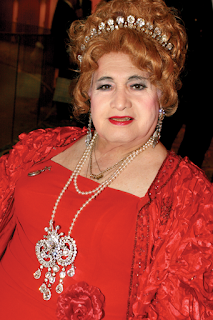 Early life and military service:
Born in 1920's San Francisco, Sarria grew up the son of a Maria Dolores Maldonado and Julio Sarria. His mother, Maria, came from a "politically active" family in Gran Columbia and his Father was from Spain. His father came from a wealthy family in Spain, and he worked as the Maitré D at the Palace Hotel in San Francisco. The two never married and Maria raised José on her own until it became too difficult to raise a child AND work as a maid for a wealthy family. José was then raised by Jesserina and Charles Millen, who had recently lost their own child to Diphtheria  As a young child, José studied ballet, tap dancing, and singing...skills that would come in handy later in life.

However, one detail I found most remarkable about Sarria's early life was the support and acceptance of the family who raised him when Sarria began acting outside of how everyone expected little boys to act in those days...

Sarria began dressing in female clothes at an early age and his family indulged him, allowing him occasionally to go on family outings dressed as a girl.


On the one hand....yes, this is San Francisco...but on the other, this is the 1920's and 30's. San Fran was not a gay mecca and for this family to let Sarria go out like this likely raised more than a few eyebrows.


Furthermore, in his high school years Sarria became a tutor to an Austrian Baron Paul Kolish, who had fled to America with his son when the Nazi's invaded Austria in 1938. Kolish and Sarria then fell in love and began what is described as José's first serious relationship. And what is even more remarkable is that It is reported that  José's family welcomed Kolish and his son. For them to be reported to be in a "serious" relationship means that his family must have been aware of it. So, José not only had a serious relationship with a Baron when he was still in high school...his family likely accepted it. I gotta say...I'm kinda jealous.

As World War II continued and it came to pass that Pearl Harbor was bombed, many young men felt the need to enlist, Sarria was no exception. However, he was under the Height requirement to be in the armed forces. Sarria...being the character that he is, seduced a major in the recruiting office and as a result got into the Army reserves. He served in the Army in a variety of jobs until his discharge in 1945.

A short time later, in 1947 his long time partner, Paul Kolish and his son were struck by a drunk driver and both were killed. The brother and only surviving relative of Kolish ignored his long time relationship with Sarria and his request that he be taken care of and instead he ignored his brothers wishes as Sarria remembers...

"...he only gave me a little money and one ring. He claimed that was all Paul wanted me to have. He was so evil. He said afterwards, 'If you expect anything else, you're not going to get it.' "


Later, Sarria returned to San Francisco with the intention of enrolling in college to become a teacher but an arrest on a "morality  charge" for solicitation squashed those dreams. And then fate stepped in....

The Black Cat, and The Nightingale:
Sarria and his sister had begun hanging out at a local bar in the Castro district called "The Black Cat". The Castro in those days was still a predominately straight, working class neighborhood but the Black Cat was becoming known as a center for Beat and Bohemian scene...and  meeting place for gay's and lesbians. It was here that both Sarria and his sister became smitten with a waiter by the name of Jimmy Moore. Sarria and his sister Teresa then made a bet to see who could get him into bed first, a bet that José won. He and Jimmy Moore then became lovers and José describes Jimmy as the "love of his life". It is through Jimmy that Sarria comes to work at The Black Cat waiting tables. It was here that his early childhood in music and dance comes to pay off. As Sarria is waiting tables the piano player begins to play a piece from Bizet's "Carmen" and as the bio from the Empress Court website reads...

One day while José served drinks and the pianist was playing Bizet's Carmen, he began singing arias from the opera. Soon his arias were a big hit at the Black Cat, and José's reputation for entertainment and performance was born.


That sounds amazing and all....but where is the cheekiness...the sheer chutzpah that we have come to know and love from our José? Ah wait....here it is on the Wiki...

One night at the Black Cat, Sarria recognized the piano player's rendition of Bizet's opera Carmen and began singing arias from the opera while he delivered drinks. This quickly led to a schedule of three to four shows a night, along with a regular Sunday afternoon show. Sarria was billed as "The Nightingale of Montgomery Street". Initially he focused on singing parodies of popular torch songs. Soon, however, Sarria was performing full-blown parodic operas in his natural high tenor. His specialty was a re-working of Carmen set in modern-day San Francisco. Sarria as Carmen would prowl through the popular cruising area Union Square. The audience cheered "Carmen" on as she dodged the vice squad and made her escape.


And so began the spark of what would be José Julio Sarria's activism. As gay men and women had to hide from the constant harassment of the police and the scrutiny of society...so to were we hiding from our families and loved ones. The closet was accepted part of life for many many gay people. However, given the acceptance of José Sarria's family and his acceptance of himself, the closet was hard for him accept:

Sarria encouraged patrons to be as open and honest as possible. "People were living double lives and I didn't understand it. It was persecution. Why be ashamed of who you are?" He exhorted the clientele, "There's nothing wrong with being gay–the crime is getting caught", and "United we stand, divided they catch us one by one". At closing time he would call upon patrons to join hands and sing "God Save Us Nelly Queens" to the tune of "God Save the Queen". Sometimes he would bring the crowd outside to sing the final verse to the men across the street in jail, who had been arrested in raids earlier in the night.


The constant raids by police and the sense of injustice that was being done toward gay people would lead Sarria to encourage those who were arrested to plead "not guilty" when arrested and to demand a trial by jury...a thing that many were loath to do because of the attention it would bring. However, little by little...more men began to take Sarria's advice until city court dockets began to overflow with cases so much that judges began to demand actual evidence be presented to prove any allegations of immoral conduct before going to trail. He also helped counter harassment of drag queens by police who used a city ordinance that made it illegal for men to dress as women "with and intent to deceive", by distributing a label  they could produce when confronted that simply said, "I am a boy". These tactics may not have ended police harassment‪, which would continue to many more years, but it gave the gay community the sense that we had to rely on each other...and we could fight back. 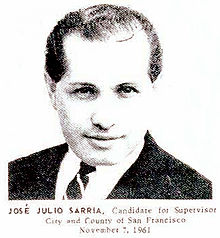 Of Politics, Activism, and Empresses:
This is a period in Sarria's life in which there are an astounding number of parallels to Harvey Milk. but you be the judge...

In 1961, During an intense period of police harassment after city government was being criticized as being to lenient to homosexuals, Sarria announced his candidacy for one of the five open City Board of Supervisors seats. No one expected him to have a serious shot....However, no one else had registered to run for those seats and no one figured it out until the last day a candidate could file. With city politicians in panic mode, phone calls went out and by the end of the day 34 new candidates had filed. Even so, Sarria still managed to come in 9th in the race...a fact that shocked city politicians and put the gay vote on the map in city politics.

José Sarria also helped found a variety of gay rights organisations. In 1962 he helped found the Tavern Guild, the countries first gay business association and after closure of The Black Cat, help found The Society for Individual Rights, an organisation that mobilized the gay community in social events, street level demonstrations, and voter education events.

Sarria was Crowned Queen of the Beaux Art Ball by the Tavern Guild in 1964, prompting him to retort that he was already a Queen and then to dub himself "Her Royal Majesty, Empress of San Francisco, José I, The Widow Norton". After assuming the title of empress (and all the high drag that entails) this led to the creation of the Imperial Court, a non-profit charitable organisation who's function is to raise money for various causes.

In 1964 José's long time love Jimmy Moore was discovered to have commited suicide and so ended their love affair....though not their love as José still refers to him as "the love of his life".

Today José has passed on the crown and title of empress to Nicole Murray-Ramirez and lives in New Mexico.

Now we have all been on the remarkable journey that is the life of José Julio Sarria, a man I knew nothing about prior to this month and now can't believe how that can be the case. If you know Harvey Milk, you need to know José Saria, their lives are too much alike and their individual accomplishments too great to be known by only a few. I am very proud to be recieving the award that is bearing his name with the knowledge of the legacy that he left. He is one of the many on who's shoulders we all stand....I hope her majesty is wearing shoulder pads. 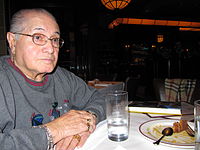