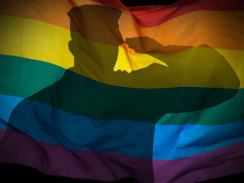 From the official press release on Representatives Pocan's website:

“As we celebrate the considerable progress we’ve made toward full equality in our military, we cannot forget about those who continue to suffer because of the discriminatory policies of our past,” said Pocan, co-chair of the Congressional LGBT Equality Caucus. “Our legislation ensures that gay veterans who selflessly served our country no longer live with tarnished records that prohibit them from receiving the recognition, benefits and honors they deserve. By enshrining the implementation of the “Don’t Ask Don’t Tell” repeal into law, our country can finally close this dark chapter of our history and move forward.”
"As an American, a Congressman, and a Korean War Veteran, I was proud to join my colleagues in ending the discriminatory law that previously barred open gay and lesbian soldiers from serving their country,” said Rangel.  “Now is the time to finish the job and ensure that all those who served honorably are recognized for their Honorable service regardless of their sexual orientation."
“The repeal of ‘Don’t Ask, Don’t Tell’ was a tremendous first step in achieving equality in our nation’s Armed Forces. It is important that we continue to address the discrimination that LGBT veterans face by updating their service records to reflect the reality of their service” said HRC Legislative Director Allison Herwitt. “We are thankful that Reps. Pocan (D-WI) and Rangel (D-NY) have addressed this issue with the “Restore Honor to Service Members Act.’”
The “Restore Honor to Service Members Act” is about more than upgrading a piece of paper. Every form of discharge previously given out prior to the repeal of “Don’t Ask Don’t Tell” carries with it consequences that can follow a service member for his or her entire life. While the character of discharge varied, many members received discharges that were classified as other than honorable or dishonorable, particularly prior to the implementation of the “Don’t Ask Don’t Tell” policy in 1993.  In many states, a dishonorable discharge is treated as a felony, and service members receiving a general discharge, a lesser offense, can encounter grave difficulties acquiring civilian employment. All were barred from reenlisting in the military. Depending on the discharge received, service members may also be blocked from voting, unemployment benefits, participating in the GI Bill or receiving veteran benefits such as health care, VA disability, and ceremonial burial rights at military cemeteries.

I want to say first and foremost that I think this is a wonderful idea that is long overdue. This is the beginning of justice for many who answered their countries call only to find it didn't want them....or worse, viewed them as suspicious because they were gay. While no "I'm sorry" will ever be big enough to cover the enormity of damage that his been done over many decades, an acknowledgement of their honorable service can perhaps change 'I'm sorry" into a long overdue "thank you". However....

As necessary as this legislation is to those who were unjustly discharged, it can only be the beginning of addressing the harms that have been done. In many ways it may not be able to bring true justice to those who may have lost their families when they found out they were gay, their job prospects and any hopes they had for the future all because of  the double hit of a dishonorable discharge and being outed. while the after effects for a person discharged in 1990 may be much less severe than for someone discharged in 1940, it can never take away the gut blow that comes with no other reason than rejection because of your sexuality.

Every year that I go to a pride parade I see vets from all generations march. To me, it was always a reminder that for every important event we have been through as a country, we were there alongside everyone else. Gay men and women fought, bled, and sacrificed just like everyone else did.....but if it was discovered you were gay was for none of that sacrifice to matter. They marched to remind the world that LGBT people serve with dignity then and now, even though that dignity may have been denied them by the same country they served.
The stamp of what they endured has become forever written in our history as gay people and shaped the direction of at least one major piece of it...San Francisco's Castro District. Without the recently discharged gay soldiers who settled there during the war years we may not have seen the Castro ever develop into a concrete, recognizable, gay community. Often, those soldiers couldn't go home, both because of the rejection they may have faced....but also because they now had a place in which they were no longer alone. So many  remained and settled in the Noe Valley area and began it's transition from working class Irish neighborhood  to center of one of the worlds most famous and influential gay neighborhoods. this may seem like a really weird tangent to some, but something as simple and cold blooded as a piece of paper that marked the status of discharged vets in WWII can have such a profound effect that can echo down through history and effect us all.
While, on the one hand, we can't change all that they have struggled through already, we can finally acknowledge what should have been acknowledged all along....that they served with honor for however long they were allowed to. They derserve that thank you along with the knowledge that it will not happen to anyone else as it happened to them.

But here is where I would like to see us go one step better....
Rep.'s Pocan and Rangel are correct in that any discharge other than honorable can have a host of concrete negative effects far beyond their loss of dignity, stigma, or the sheer insult that they were not good soldiers simply because they happened to be gay. As a Towleroad commenter put it:

They should also re-issue DD-214s to all the discharged members who have the GAY CODE NUMBER and reason for separation, even on honorable discharges. It informs all of your potential employers that your gay and causes a great amount of job discrimination.

There are also the issues of back pay, pensions, access to medical coverage, VA loans, and many more services that could have been denied to a person dishonorably discharged. Will changing their service records to reflect honorable service then make these men and women entitled to these benefits? As many of these soldiers and service men and women are in their retirement years, benefits like these could mean all the difference to them.

I applaud Representatives Pocan and Rangel for having the courage and thoughtfulness to bring some long overdue recognition to LGBT service people separated long before Don't Ask Don't Tell was even a glimmer in Bill Clinton's eye. I do hope however, that we can do more than amend the words on a document and instead confer the full status and benefits due to those who would have otherwise have served their full term and then been honorably discharged. They have suffered enough abuse for no good reason and it's time they find restitution. If, in the repeal of DADT, we can finally acknowledge that gay people are just as fit to serve as their straight counterparts...then it stands to reason that we always have been and that very many people need a lot more than an "I'm sorry" and a slap on the back. It's not about simply rewriting history. it's about taking care of our own. 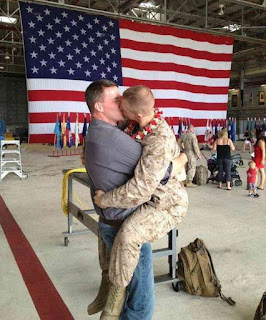