The President and DoJ Decline To Further Defend DOMA...Time To Celebrate? 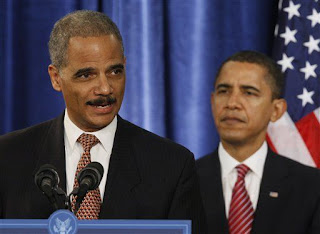 Some Days I log on to the Internet and simply can't believe what I read....and todays news has totally left me gobsmacked. Chief Attorney General Eric Holder has released a statement that the Department of Justice will no longer defend DOMA's section three. In addition, this means that President Obama has taken the official, public stance that he believes DOMA to be unconstitutional. You heard that correctly. The same president that has been ducking and weaving around taking an official stance on the Defense of Marriage Act has not only come out against it...but come out swinging.

The details of this announcement are still emerging and are still somewhat subject to the fog of war. While the news is on almost every site imaginable,  the discussion and analysis of the President and DoJ's move is still somewhat conflicting. However, while this may not be the killing blow to DOMA it definitely removes it's bullet proof vest. but what does all this really mean in a practicle sense?


Ari Ezra Waldman, writing for Towleroad, has offered his own legal analysis of what the DoJ's announcement mean for the struggle to repeal DOMA. I recommend that my readers check it out for themselves because there is a huge possibility that my understanding of this can be flawed. However, in a nutshell this is what I gather....

Waldman pointed out that DOMA is not dead for a couple of important reasons. First, even if the DoJ  does not defend DOMA in court, congressional leaders have a right to defend any law duly enacted by congress. In my opinion, the new crop of tea party republicans in Washington are probably already salivating at the chance to do so. Given the insane things they say in public...this may be a good thing.

Secondly, the Attorney General addressed the issue of what basis is to be used in determining the constitutionality of DOMA in the second Circuit Court:

Section 3 of DOMA has now been challenged in the Second Circuit, however, which has no established or binding standard for how laws concerning sexual orientation should be treated. In these cases, the Administration faces for the first time the question of whether laws regarding sexual orientation are subject to the more permissive standard of review or whether a more rigorous standard, under which laws targeting minority groups with a history of discrimination are viewed with suspicion by the courts, should apply.

After careful consideration, including a review of my recommendation, the President has concluded that given a number of factors, including a documented history of discrimination, classifications based on sexual orientation should be subject to a more heightened standard of scrutiny. The President has also concluded that Section 3 of DOMA, as applied to legally married same-sex couples, fails to meet that standard and is therefore unconstitutional. Given that conclusion, the President has instructed the Department not to defend the statute in such cases. I fully concur with the President’s determination 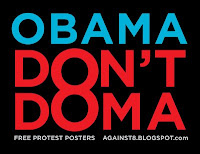 It is Waldman's view that which basis the courts use...the more permissive rational basis...or the much more strict heightened scrutiny criteria is a matter that the court can chose for them selves. The recommendation of Attorney General Holder is just that...a recommendation. Waldman also asserts that the type of scrutiny the courts are to use in evaluating DOMA will in all likelihood end up being heard as a separate court case. So...in addition to glacially slow progress DOMA will be taking through the courts on it's own, it's possible that the courts will also be hearing the subject of what standard to use in evaluating DOMA. As if things weren't taking long enough...*sigh*

So, while today's event is a very good thing, it comes tempered with the knowledge that we are in for a long and costly fight before we will see DOMA gone by any judicial means. That said...it will still probably be faster than waiting on things to change in Congress, which could be a big..fat..NEVER.

since the announcement has gone public it has caused ripples of shock everywhere...from jubilation in some, to alarm in others. Everyone has an opinion and/or wants to jump on the bandwagon. Maggie Gallagher of the National Organisation For Marriage on Fox News, made the comment that the President "just made gay the same as black"...stay classy Maggie. Republican House Speaker John Boehner claims that "now is not the appropriate time"....of course, did we expect anything else from him? And finally, Senator Dianne Feinstein(D) is claiming that she will introduce legislation in Congress calling for the repeal of DOMA, prompting many of us to ask, "why now?" After all, Democrats did nothing but balk when they had a majority. Would any legislation introduced now ever see the light of day? As you can see, we are not even 24 hours away from this announcement and people are scrambling to react.

What will ultimately come of this remains to be seen. To me it feels a bit like the scene in Star Wars: A New Hope in which rebel leaders discover that the dreaded Death Star has a weakness and everyone has to mobilize to exploit it before it shows up and blows them into atoms. We all know what happened there...can we be so lucky? Only time will tell. 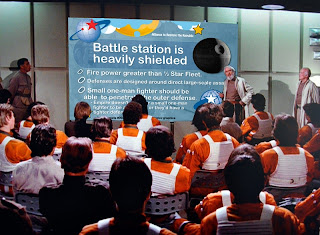