The Supremes Take The Case 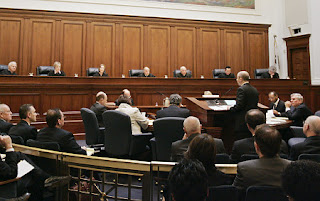 ...The California Supreme Court that is..not the bouffant becoiffed divas of Motown....though it sure would make this trial alot more bearable.

When last we left Perry v. Schwarzenegger, the ninth circuit court of appeals could not..or would not...tackle the issue of whether the individuals at protectmarriage.com had legal standing to defend Prop 8 in court if the Governor and Attorney General would not. This leaves many of us wondering...where did our love go? Why could they not answer this themselves? Instead of coming to their own determination, they elected to send a certified question back to the California Supreme Court to get their official opinion on what state law says on the matter. Your may remember that they were same court who's tragic love child was upholding Prop 8 in the first place. My reaction to this was one of frustration and my reasoning for this is twofold:


1.) As Attorneys Olsen and Boies have already pointed out. This trial is being conducted on a federal level. Any issues of standing should be determined by a federal judicial body....AKA the very justices who are kicking this question back to the state.

2.) The California Supremes Can not hear the question until September and will not render a decision until approximately two months later....Dam! that means no answer on this till the end of the year!

Stop in the name of love! Say it's not true! 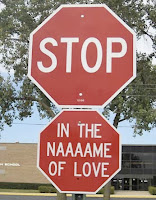 Yes, I'm afraid it is. Our forever came today...waiting forever that is. While it's bad enough waiting for each successive chain of the appeals process to take three or four months to review evidence or hear new arguments, now we have take this little detour backwards into the state court system. This is puts the Ninth Circuit on hold while the CA Supremes play out the rest of year and there decision could possibly end this trial if they find grounds to deny standing.

The part pf this that frustrates me is that this isn't even the core case...this is just a question, albeit and important one of whether or not someone other than an official state representative can function as a defendant of a state law. It's also a question with existing precedent on public record. The specific cases that outlined that precedent were sited by Ted Olsen and David Boies when the Ninth Circuit held oral arguments earlier this year. It seems to me that really should be a simple "yes they do" or "no they don't" situation. Instead, this has now turned into another 7-10 months of dickering for them...and nothing but heartaches for us. Again, it's time to wait and they keep us hangin' on.

Perhaps someday this whole circus will be just faded reflections. All the broken promises and struggles will be distant memories that our children  will shake their heads at in wonder. Perhaps, as we go about our daily lives we will wake up to find that equality finally came through, as it did the day my husband and I heard on the radio that the State Supreme Court had first ruled denying gay men and women marriage unconstitutional. That day felt like the most wonderful unexpected gift...and one we had never expected to receive. We could finally be legally married. It seemed too amazing to be actually happening and we acted on it before we could wake up and find it all just a dream.

While my husband and I took advantage of that very short lived opportunity, so many more can not...and that's why we keep fighting. One day we hope that all gay men and women will be able to marry the one they love...not only in California, but across the nation. Some times it feels like it takes so long...and those in charge of the process don't seem to have any sense of urgency. But we all hold on and keep the faith. Perhaps one day we will be again going about our lives when a fateful email or news broadcast will fill us with the joy that California has again embraced equality...and maybe one day it will be our nation. Wouldn't that be something. If we have to wait longer to know that joy again, then so be it. In the words of the Supremes...Some day, we'll be together...