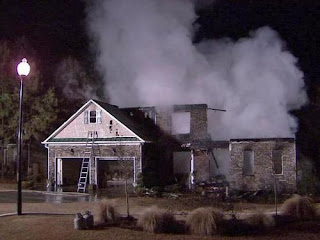 Most gay, lesbian, bisexual, and transgender people learn from a very early age that the world is not necessarily a safe place for them. Maybe it's a comment made by your parent's that teaches you...or the first time some guy at school calls you a faggot and makes your life a living hell...but you learn early and often in ways that you will never be able to forget. No matter where you are...being out of the closet carries with it a certain amount of risk and you weigh that risk against the gains of living an honest life. Through all the advances we make as a community, and all the hard won strides we make in gay rights...sometimes we are still reminded of the nature of the world we live in.

Clayton, North Carolina gives us one such reminder. Recently the home of a gay couple there was burned down in what is being ruled as arson...and wonder of wonders...a hate crime. Fortunately for the couple, who's names have been kept anonymous, they were out of town at the time the fire was set. A Neighbor who also chose to remain anonymous for fear of her own safety claims that the couple had also experienced harassing notes dropped in their mailbox...had their home defaced with anti-gay slurs...and tires slashed on a vehicle in their garage. According to an Towleroad update, police are looking for a White Chevy S-10 pickup pulling a trailer containing ride on lawn mowers stolen from the home. The couple is being put up in a hotel by the Red Cross who is also helping out with food, clothes and insurance contacts.

This whole event just angers me. Who should have to live their lives in fear that something like this will happen? And what if this couple had been home asleep? The consequences of events like these are not merely the burning of a home...or the loss of possessions...It's the damage done to the soul that can take so much longer to repair.

One facet of this story that amazes me is that it was actually being investigated as a possible hate crime. So many blatantly awful things have happened to gay people this year that had elements of homophobia that did not even get considered as a hate crime that it's beginning to  make hate crimes laws look like a toothless joke. Often, obvious examples of hate based motivation can be relabeled as something else and the whole thing tossed aside. For example, accounts of people being brutally beaten after leaving a gay bar and while being called slurs...and at least two other stories of homes being lit on fire after conflicts with homophobic neighbors and in most cases, authorities dither on whether or not these should be considered hate crimes.  It doesn't take a genius to connect the dots but maybe some just don't want to.

Maybe I'm being a touch dramatic...but hearing what happened to this North Carolina couple makes me angry and totally overrides the voice of caution in my head that reminds me there are elements to the story that we don't know enough about to draw conclusions...but...allow me to jump to a few.
From the pattern of harassment that these men had been going through, it seems as if who ever did this was slowly escalating their attacks on these men...first a threatening note...then graffiti meant for all the world to see....then getting brave enough to enter the home as far as the garage...and next finding an opportune time to light the house on fire and steal their belongings. Given the escalating nature of these events, I wonder if the perpetrator would have eventually graduated to actually breaking in and harming these men while they were at home. Instead, choosing a time when they were away suggests..to me at least...that this person didn't have the nerve for that...yet. All his acts were done in secret...violent bigotry without the courage to claim his actions...and I bet he patted himself on the back for "showing those queers." It seems a cowards way out...but then, we don't know the rest of the story yet. Perhaps the couple knew who the harasser was...and perhaps more than a few neighbors did too and chose not to act on that knowledge. Did these men call the cops for the things that were going on prior to this? Did the neighbors? Too much we don't know but what we do is bad enough.
Everything these men owned....Everything that represented the life they built together, sits in a pile of brick and ash....all because of someone who felt like their actions are justified because they were done to gays. While the couple may not have been physically beaten, what happened to them can have many of the same psychological effects. The world becomes an unsafe place in which the hatred that used to be hidden behind sideways glances and whispered comments has just reduced your home to ash. The message "you don't belong" comes through loud and clear. If this was me I'd be checking for locked doors and windows, installing security lights, and laying awake at night anyway for months to come.

When I read of stories like these, they usually come from states that are not known for their tolerance or acceptance of gay or transgendered people. But there isn't a one of us, that upon reading their story can't feel concern, anger, and the instinctual fear that this could happen to you too....far too easily. Hell, I live in a really progressive part of California, but I know that walking down the street holding my husbands hand, or a casual kiss seen by the wrong person can mean violent confrontation in a heartbeat. So, if I can't let my guard down even in a place like this, then were can  I? Where can anybody? Is the answer to move to some place like the Castro?....That may be the answer for alot of people. Moving to a big city where there's lots of people like yourself is one way to carve out a small chunk of the world and turn it into a safe place. A place where you can find work...maybe love, and live in relative peace. For some of us that come from overwhelmingly homophobic places, getting out is just the best option.....but with all that we gain from carving out our own neighborhoods there are some things we lose as well.

Speaking only for myself..I love the place I was born in. Every year it gets more crowded and more expensive but all my best memories have taken place within its borders. My family is here and many of my friends....and In the evening when the sun sets, it's like magic to me. It falls on rolling hills and vineyards, turning everything golden. No matter what insanity might be happening in my life, I can see that and feel at peace. I know I am home. If I put myself in the shoes of these men, I think I would try to find some way to rebuild my life, because why should any of us give up the lives we build..or the memories we have made to find a place where you are allowed to exist in safety? We should not give them that power over us. 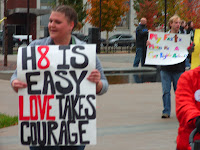 In addition, how many of the people in these men's lives are better for having known them? How many of these people may have silently approved of this event if they read it in the paper and not had the chance to live down the street from thinking, feeling, real human beings who just happen to be gay? How will the world ever change if we don't live in it?...all of it.
Maybe these men are made from sterner stuff. Perhaps they will feel deep inside that this is their home and no amature firebug with a fetish for lawn tractors is going to take that away from them. I hope so. The world reminds us enough of the dangers we face when we risk being out. Sometimes we need to remind ourselves that we do belong....that our lives are as important as anyone Else's and worthy of being defended. No one will do that for us...that's something we can only give ourselves. Whether we learn to face it in high school or as adults, facing violence and intimidation is a part of the crucible in which our spirits are made.

This story touches my heart. I guess because there have been so many other stories of violence to gay and trans people this year that the weight of it all begins to pile up on me. In the wake of telling everyone, "It Gets Better" we have to acknowledge that...yes, it does get better..but that's because we have the ability to make it better by our own choices and by a certain amount of courage to live in an uncertain world....a world that is still deeply imperfect at the best of times and sometimes just downright dangerous for us. It does indeed get better...but it takes balls too. 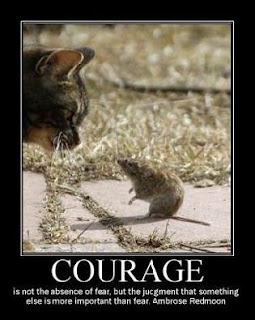