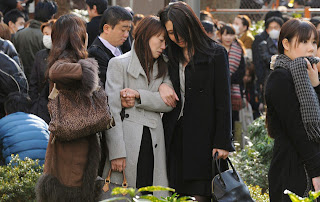 The story in Japan wasn't something we merely read about from a distance. The modern world being what it is, we got to see many moments first hand. The awesome and truly frightening moment as black waters overwhelmed the seawalls and washing away ships, cars, buildings, and peoples homes:

Yet there were nail biting moments such as the people who could be witnessed fleeing from the wave to higher ground and barely making it:

And the triumph of those who did survive:


This was not a disaster that took place an ocean away. This was an event in which you could see the terror in the eyes of those who experienced it as it happened to them. So would not the response to so much human suffering be to extend compassion...to the utmost to help people get food, medicine, blankets and other essentials?....to offer your prayers or expressions of sympathy and encouragement? One would hope so.

Another instinctive response to tragedy is to search for a meaning...to know "why" it happened. Unfortunately, we can go to some very negative places in our search for that meaning. Lately, that need to know why has been seized upon by some who see it as a sign of the end times....and others who would use it as a springboard for their political motives.

Here Rush Limbaugh uses the pain of the Japanese people to attack environmentalism:

And here a pastor makes the claim that the misfortune of Japan will translate into greater economic misfortune for America at about the 1:40 mark:

The theories about why this happened abound. For myself, I find it to be missing the mark to stand back and judge another persons misfortune and claim that it happened because of a wrong they did. None of us know why the terrible things that happen in the world do happen and engaging in this kind of post game analysis before the crisis is even passed is like watching a man who has been  beaten and lying in the street..and then claiming it was all his fault. I would hope that instead of offering our judgements, we could offer our help....for free...and not with a blanket in one hand and a sermon in the other. After all, what would we want to have happen to us if our lives had just been swept out to sea?...When you are heartbroken and grieving? Living in California as I do, I see what happened to Japan and know that it could happen here in a heartbeat....and we are not nearly so well prepared as they. Who would we want to be there to pick us up off the ground?

For ways you can help please visit this rather excellent list of resources over a Huffington Post: