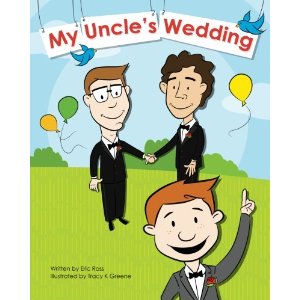 
The answer to the question turned out to be just under three days. This is what I had found so amusing. No sooner had the question been framed when the wheels of controversy had already been grinding away over at NOM. The only thing missing now is the fake teacher claiming that she was forced to give the books to the fake, paid actor families who were forced to read the book to nonexistent children while playing Lady GaGa in the background. Just like they did with "King and King'. It's coming I tell ya...just like that coming storm.

I have Good As You to thank for bring todays NOM blog post on the book to light. I have to say...I almost sprayed my coffee all over my computer screen. someone really should warn you about these things first. To be fair, NOM did little more than feature the book with a supporting blurb from California State Senator Mark Leno. NOM's real intent in posting the book to their blog is revealed in the comments to the post...and I'm sure it will pop up in an anti-equality ad very soon. Here's a sampling of the discussion taking place over at the NOM site:

Yes, by all means lets encourage children into a lifestyle suffering pandemic AIDS, syphilis, MDR gonorrhea, flesh-eating MRSA and others.....

You knew this was coming...By Barb:

And my personal favorite...from Don:


Vladimir Ilyich Lenin, who was a communist and the first head of state of the former Soviet Union, had this to say regarding children:

"Give me four years to teach the children and the seed I have sown will never be uprooted."
"Give us the child for 8 years and it will be a Bolshevik forever."
"The best revolutionary is a youth devoid of morals."
"Destroy the family, you destroy the country."

The homosexual "equality" agenda is backed by the Communist Party and what we are seeing is the implementation of the communist plan for children as preached by Vladimir Ilyich Lenin. Don't be fooled by the cover story that this is about some sort of "equality" for homosexuals. That is merely camouflage!


And for those who couldn't make the signing...Sean Chapin put together an awesome video to commemorate the event. Check it out and check out his videos. He always does amazing work!