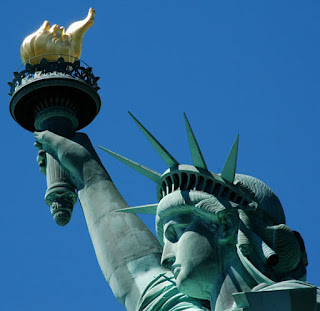 The New Colossus:
Not like the brazen giant of Greek fame,
With conquering limbs astride from land to land;
Here at our sea-washed, sunset gates shall stand
A mighty woman with a torch, whose flame
Is the imprisoned lightning, and her name
Mother of Exiles. From her beacon-hand
Glows world-wide welcome; her mild eyes command
The air-bridged harbor that twin cities frame.
"Keep ancient lands, your storied pomp!" cries she
With silent lips. "Give me your tired, your poor,
Your huddled masses yearning to breathe free,
The wretched refuse of your teeming shore.
Send these, the homeless, tempest-tost to me,
I lift my lamp beside the golden door!"
-Emma Lazarus
Most people may be familiar with at least a part of this poem.....Yes, I know...it's a sonnet...but let's not get technical. For many of us, it was required reading in elementary school when learning about civic and American history. It's a text heavy with meaning for us as a nation. While on the surface it gives person hood and meaning to the Statue of Liberty, it also serves as a call to the outcasts and disenfranchised of all nations that America would accept and be a safe home to all who embraced her. In addition, this passage... just as Lady Liberty herself...became personifications of the meaning of our founding fathers when they authored the words..."We hold these truths to be self-evident, that all men are created equal, that they are endowed by their Creator with certain unalienable Rights, that among these are Life, Liberty and the pursuit of Happiness."
How sad then to see that only a few generations is all it takes to forget this important part of what it means to be American.  We were meant to be a land of opportunity and a safe haven for others and yet hatred, bigotry, and ignorance have again gained favor as the path of the patriot. Often  practiced by those who wish to claim a moral and patriotic high ground.
Today I came across a video that has turned my stomach and made me truly sad. In a YouTube video I positioned after the jump, you will see a group a people holding a charity benefit in support of women's shelters and the homeless in Orange County, California. The event was protested by local tea party conservative groups and a handful of elected officials who's behavior included inciting violence and the murder of the charity events attendees. Watch the video and then see if you can tell me just what the hell is going on with our country?!
Yes...this event was held and attended by a Muslim charity group. I withheld that fact because it should not affect the fact that these were people peaceably gathering at a charity event. An event in which children were present. yet it seems that people are so frightened by Muslims now that any one who claims that faith is automatically branded a terrorist. They assume that all Muslims are the same and refuse to consider the fact that they can be as varied in the observance of their faith as many Christians can be. Yet none of that matters to the people who gathered to protest this charity event. All it takes is a head scarf or a middle eastern sounding name and you're a bomb strapped terrorist. I'm not quite sure where these people got the idea that you have to be white and Christian to be considered an American worthy of common courtesy and respect? And blaming these people for the tragedy of 9/11 is despicable.
I could not help but think back to the way that many Americans viewed Japanese Americans after the bombing of Pearl Harbor. The same type of hysteria and demonization of an entire cultural group led to the utter violation of the civil rights of many Japanese Americans who by virtue of simply being Japanese were considered a security risk to the nation, stripped of their businesses and homes, then placed in internment camps, even though many Japanese Americans were dedicated patriots who served with distinction during the war. Many Americans could not get passed the idea that Japanese=enemy, leading to many years of discrimination after the war. We now look back upon those times with regret and understand that it was wrong. Because we were at war, we chose fear of an entire race over the core ideals that brought so many of our ancestors here in the first place. How is what these Tea Partiers doing any different?
However, what is worse for me are the actions of the city councilwoman who claimed she knows a few marines who would help the charity goers "achieve paradise". If ever there was a call to murder, that would be it. And the congressman who is "proud" of what the tea partiers were doing...really? I am not proud of it...it makes me sad that we are again facing the specter of bigotry on such a grand scale and it makes me even more sad to know that there are elected officials who would praise such actions. I would have thought by now that we would have learned that lesson by now having faced it in so many forms already. However, the same human failings plague us now it seems...and we use the same excuses of patriotism and religion to justify treating others as if they have no place in a land in which all men are supposed to be created equal.

Why does this hit home for me? Well...it really should mean something for all of us just from a human perspective. However, gay men and women as well as transgendered people are no stranger to being subjected to this kind of unreasonable hatred. We may not have come from some far away land. In fact, we come from every quarter of the nation and from the same kinds of families that protested at this event...yet we are treated as if we are foreign interlopers and the ultimate threat to American culture...hence, the culture wars. You know, that fictional construct concocted by religious pundits meant to frighten the populace into believing that gay people are out to destroy the nation one marriage at a time? Yes...that one. For some, the war is only one of words. However, when we make others into an enemy to be frightened of...instead of a fellow American we happen to disagree with, even passionately...how long before those words become real violence?
This was the  concern of our family when we were recently targeted by a religious conservative YouTube user. This particular user, named Godgunsgutsglory, made the suggestion that the only way our kids were ever going to live a "normal" life would be if  someone "took us out". He then went on to claim that our blood would one day be spilled out on the earth. Whether or not this individual has the capability to make good on his own words only God knows. But even if he doesn't someone else who watches him may. He had just threatened our family with death and did so in the name of truth, patriotism, and his religion. In response to his actions, we turned to local law enforcement and the online community to help end this mans threats. After facing multiple violations for his hate speech, Godgunsgutsglory's channel was closed permanently...but the video in which he suggests our deaths is mirrored here:
This would be disturbing enough were it the act of a single misguided man however, 4G's is a member of Faithful Word Baptist Church. A church who's pastor has prayed for the death of the President. The apple doesn't fall far from the tree you see...
I would like to point out something that I believe...though I can not prove this assertion. This is only my opinion. I believe that many of people who participate in the marriage equality debate secretly stand behind the messages of men like this. Organisations like The Family Research Council and The National Organisation For Marriage may tweak the language to sound as if they are simply concerned, yet fair-minded citizens but the reality is they engage in language that creates an "us versus them" mentality that sends the same message to listeners though in a coded manner.

I think by now we can draw some basic assumptions. First, we need to be able to talk about subjects we passionately disagree about without threatening death. I think that ones kind of a deal breaker. If we can't get passed that step than further efforts at understanding and dialogue are not going to go very far.

Second, the words of the poem above make clear that America is a nation of immigrants. Unless you are Native American, chances are your family came here from somewhere else. Claiming the flag as if you are a real American and chanting for others to go home denies the fundamental reality that we all got here from somewhere else. America may have become home for you Irish great Grandfather, your Italian Great-Great Grandparents, or even your African Great-Great-Great Grandparents. When immigrating to America, most of our ancestors had to overcome prejudice against other cultures. History tells us that Italians and Irish were not welcome in many places. Chinese Americans helped build the railroads but even they had to build their own neighborhoods and communities separate from everyone else. How sad would these ancestors of our be to see their great-great-great grandchildren spitting on others who have come to America for the same reasons they did. How much worse to be calling for their death. Our families were those huddled masses yearning to breathe free, and they were afforded that opportunity...else we would not be here to curse a new generation yearning for its own freedom.

Have we become so far from our roots that we have forgotten where we come from? Are we to follow in the footsteps of the Third Reich in that we need an internal bad guy to blame all our problems on? Will our religion be the justification for that fall from grace? The very same that tells us, "Whatsoever you do unto the least of these my brothers, you do so also unto me"? This is why I believe that the idea that their are "true Americans" is a betrayal of the spirit of our Nation. As long as we continue to walk this path of hatred and demonization of our fellow Americans on the basis that only "we" are the true Americans, than I don't see how we can look Lady Liberty in the eye. I don't see how we can continue to teach this poem to a new generation of grade schoolers since we have turned our backs on the spirit of the very things we seek to wrap our prejudice in? We bear in mind that Lady Liberty is only a symbol, but she is a symbol of all we are meant to be. As the poem goes: "her name is Mother of Exiles". You and I dear readers, are all exiles.
Until next time dear readers... 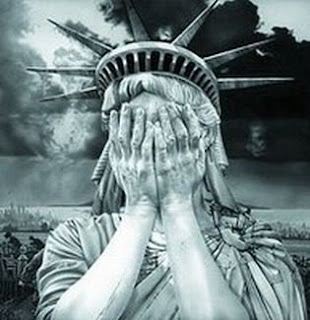