Marriage equality in the state of New York has been a contentious battle for a very long time. Long time readers may remember some very bitter and angry posts from me around the end of 2009. At that time, marriage had come up for a vote in the State Senate only to be defeated by a handfull of Democratic Senators who chose to vote against it. Well New York never gave up and after some bitter elections in which a great many of those Democratic Senators lost their seats, we are again coming close to the very real possibility of a favorable vote on same-sex marriage in New York...and for some surprising reasons.  Republicans are beginning to step up in support of gay marriage from some unexpected quarters....yes, you heard me, Republicans....While a certain Democrat from the Bronx continues to be very vocal opposition. It all seems a bit like falling into an alternate dimension where everything is opposite...but could this be the way things are headed?


Republicans have long been the party to use their opposition to GLBT issues as a way of defining themselves against their rivals for power. They were the party of social conservatism...which I interpreted as "let's all live as if it's 1952 forever." They wrap themselves in the flag and claim that they are the only true Americans. They are the party most often to claim "family values" and use religion and their own narrowly defined set of values to excuse treating gays and other minorities as if they are not American citizens but  a menace to the country to be defended against at all cost. They are the culture warriors..and we have been their target for vilification on many a campaign trail. It is surprising then to learn that so many conservative leaning people have begun to take up the cause of marriage equality for New York.

The first sign that the game had changed over 2009 was an open letter sent to the Governor by nearly Two Dozen business and financial leaders urging Governor Cuomo to support marriage equality in New York. Among those who signed the letter include the CEO's of J.P. Morgan, Morgan Stanley, Bloomberg L.P., and Goldman Sachs, among many others. Whatever the individual views of each CEO may be, business tend to support Republican candidates which makes a letter from these heavy hitters of the business community nothing to ignore. It may also have had a hand in influencing the Governors subsequent verbal support for the issue.

In addition to the Governor...New York City mayor Michael Bloomberg has issued his own pledge to back Senators who support Marriage equality and a threat to withhold financial support from those who don't as reported in the New York Daily news:

Bloomberg pledged to back senators who "stand up for marriage equality" and warned that those who don't could be left without his often-generous financial support. "I certainly will concentrate and focus more on those that do,"

The final story to surface in recent weeks reveals that gay marriage advocates have been getting a huge influx of cash from wealthy donors who traditionally support G.O.P. causes. So far, contributions equal about one million dollars...about two-thirds of all donations received by those fighting for same-sex marriage so far. All of these funds going to support a major television add campaign and what the New York Times article describes as "grassroots" activism...though how you can get away with calling support from wealthy donors "grassroots" I can't imagine. 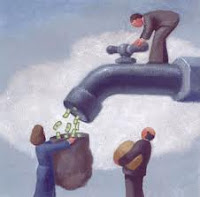 The major question I have upon reading about this watershed of support for gay marriage is, "why?"  What has changed in the last two years that accounts for such a thawing of the ice on gay issues in the G.O.P? Perhaps the article hits the nail on the head when it points out that some justify their new stance by claiming that it's simply good for business. But then...why wasn't it good for business in 2009? Or perhaps we can believe the answer quoted in the Times  by major Republican donor Daniel Loeb:

“I think it is important in particular for Republicans to know this is a bipartisan issue,” Mr. Loeb said. “If they’re Republican, they will not be abandoned by the party for supporting this. On the contrary, I think they will find that there is a whole new world of people who will support them on an ongoing basis if they support this cause.”

These are not republicans I am used to. I am used to the Newt Gingrichs and Rick Santorums who have made their living keeping us out in the cold. And I know that we are talking about New York here, not the nation at large, but could whats happening in New York signal a larger shift that's only just begun to take place? I can't help but have more questions than answers. Will the message Mr. Loeb hopes to send be received? And if this huge influx of G.O.P. support makes a difference in bringing marriage equality to New York, will it be duplicated elsewhere? What does this mean for the future of gay rights as one of the G.O.P.'s biggest wedge issues? Is the ice finally thawing that has left America's GLBT's out in the cold for generations? I turn it over to you...what do you think?