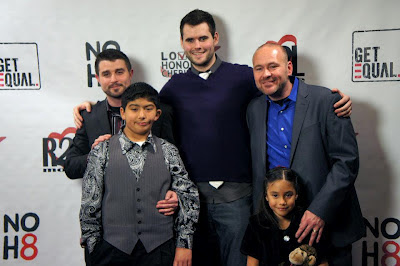 Well the Premier has come and gone and over all I would call the event a success! It all passed by in such a whirlwind that the time passed from when we arrived at 3:00 to when we left around midnight in no time at all. It all went by in a blur of picture taking, movie watching, and Q&A's. As nervous as I was waiting for the event...actually being there was loads better than waiting. We all had a great time...even the kids though they ran out of energy pretty fast. There's a lot that I could say about the event but I want to focus on one portion of it in particular and that was getting the chance to meet Zach Wahls.

For those who may not remember Zach stood before the Iowa House as the son of two moms and gave a heart breakingly inspirational speech that was instrumental in that states marriage equality fight. The video clip of the speech went viral not once, but twice so if you haven't seen it to know what an incredibly eloquent young man he is...go there now and check it out.

During the movie premier I not only got the chance to meet Zach but to interview him as well.....and as you will see after the jump, Zach represents something special for me as a gay dad.


But first....a short interview break with our guest:

If I hear one common comment about Zach Wahls, it is that his maturity and eloquence often gives the impression of a man far beyond Zach's 20 years and after meeting with him I have to say that is very true. He has a way of making a point that sounds like it comes from someone with a lifetime of experience....and I think in his own way, he does. Being the child of two moms has given Zach twenty years of an inside perspective on the issue of gay families.  That life experience, coupled with the awesome young man that Zach's mom's raised come together to make an extraordinary individual in many ways...not the least of which is his willingness to speak up not only for his family, but for others like his.

However, its also easy to see the young man barely out of his teens. Underneath the family activist, college education, and eloquent speaker, is a young man who spoke with us over dinner about Star Wars and which  video games we love to play. He talked openly about his frustrations with others who question whether two moms can raise a "masculine" son and how angry he gets when he learns of gay parents who react badly if their children turn out to be gay or trans. In those candid moments it became easy to see the Zach before he became a same-sex family advocate and top notch straight ally. Meeting him at the premier and again over dinner the following night was an enjoyable experience all by itself...but it held a different facet for me at the same time.

As parents, we can't help but wonder what kind of people our kids will turn out to be. Sometimes even the best of childhoods is no guarantee of raising a decent person who thrives in life....and parents will always blame themselves. I have often watched Selena color and wonder if she will grow up to be an artist who lives a quiet life...or raid her room because its packed to the rafters with her drawings and creations and wonder if a hoarding intervention is in her future. And Daniel....I was always concerned that his love of food would be channeled into destructive habits instead of more positive ones. 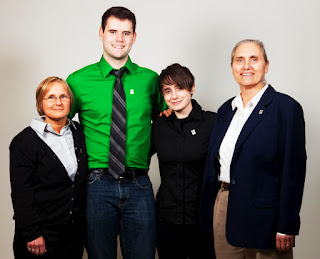 But as the kids grow and change, their personalities and habits change too. The Daniel of 1rst through 3rd grade aimed low in his achievements and idolized the troublemaker "bad-boy" kids he saw on TV shows like Zack and Cody on the Disney channel...one of the things that led to a ban on that channel in our home. Over time, that Daniel has slowly gave way to a more thoughtful young man who reads for fun, gives his best efforts in school, and helps out with the smaller kids. And sadly, I already feel the subtle emotional separation of Daniels approaching teen years. Just when I think I know, things change and it becomes clear that who they will grow up to be is a work in progress that can not be predicted.

And then I met Zach and thought about how his mom's must have had all the same concerns at some point and here was this remarkable young man standing before all of us and inspiring so many people. As a father...AND as a gay gather in particular...it helped me see a glimpse of what may be.

When discussing "kids need a mother and a father" critics, Zach makes the point that he didn't have a dad to teach him to shave or do those traditional dad things....and yet he stands before us as a grown man able to do all those things. In fact, he often jokes that  the most enduring legacy of having two moms is that he is "really good at putting the toilet seat down".

So I stood next to Zach in this interview and all I could think about was that one day, I could be standing next to Daniel and Selena in a similar way. Proud of them...as I already am...even if they don't become activists or eloquent speakers about their growing up experiences. I will be happy that they made it into adulthood and can take the rudder of their own lives the way we all have to do...with joy, determination. and uncertainty. It was a deeply encouraging and humbling feeling and also a little like walking into the future for just a moment.

But standing here in this present moment, I get the gift of enjoying them when they are small. I get to be there when Selena needs her first bra...and Daniel really needs to shave. I am grateful to have met Zach for the short time that he was hear and I doubt he is aware of the impact he has on gay parents. When I got home....well frankly I collapsed in a heap...but when I got up again I gave both kids big hugs and was profoundly gratefull for the awesome people they are...even when they don't do their homework or miss the toilet by at least a foot. I realize that the future that Zach represented to me stands in front of me everyday and says, "good morning dad".....I love that.