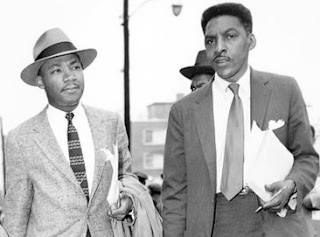 Again, my ideas about who we are as gay men and women had been changed and I needed to know more. Fortunately, because it was recently the anniversary of Rustin's 100th birthday there has been some talk about him and his life which led me to a documentary about his life....Brother Outsider, The Life Of Bayard Rustin. What I have learned about him not only answered all those questions I had and made me feel a personal connection to events that happened before my birth...they showed me and a singular individual, who was amazing all in his own right
Too often in history the fact that and individual was gay is completely sanitized from the record. That Rustin's contribution to civil rights as a gay person is not widely known by the average person is no surprise at all. However, I had come to think of that time as one in which the nation took a great stride forward to honor it's promise to all Americans. The names associated with the Civil Rights movement...like Martin Luther King Jr., and Rosa Parks have become  synonymous with strength, faith, perseverance, and courage in the face of overwhelming resistance. To know that a gay man stood at the heart of the storm with people such as them made me feel a connection to those times and events...and a tiny surge of pride. "See"...I want to say to everyone who ever told me that being gay was a road to misery..."we are here too." 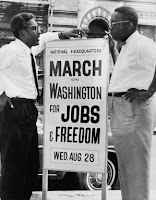 Rustin was an extraordinary individual. He was raised by his Quaker grandmother who instilled in him the need to act in a peaceful way to right injustice. Bayard was fighting for the civil equality of blacks and practicing non-violent protest long before a larger, organised movement existed. He campaigned against Jim Crow laws, helped organize the first March on Washington in protest over segregation in the armed forces, and he was arrested for sitting in the front of the bus long before Rosa Parks, he worked to strengthen labor unions, journeyed to California to protest the treatment of Japanese Americans who had been placed in internment camps, he worked to end discrimination for Soviet Jews, and gave blood in impoverished villages in Vietnam.  He also journeyed to India to learn about how to implement Ghandian non-violent civil disobedience which he then used in civil rights demonstrations back home. He helped organize the "Freedom rides" and later on became the chief organizer of the now famous March on Washington. These are just a few of his accomplishments. Bayard had a very strong sense o social responsibility and believed that the only way to affect change was by the use of action and our physical bodies...the quote at the top of the post attests. His experience in civil disobedience and as an organizer in mass demonstrations made him a sought after adviser and during the Montgomery bus boycotts, would eventually lead him to his 3work with Martin Luther King

That Bayard Rustin was an epic figure in the civil rights movement is not hard to uncover. His life as a gay man though is seldom talked about and I don't think Bayard ever drew any distinctions between the work he did to advance black civil rights or the work he did for gay rights.  Though there has been a point of contention between those who resent the LGBT community for likening the gay rights movement to the civil rights movement....this is a sometimes heated conversation that inequality groups like NOM sought to exploit with their "divide and conquer" strategy. However...to me, men like Bayard Rustin, who stand at the intersection of race and sexual identity, show us how artificial our divisions of the two really are. Are they exactly the same...no. But, would Bayard have had to chose between which part of himself to fight for?...the black part or the gay part? I believe that he saw all struggles for equality as part of one fight.

The interesting thing about Bayard Rustin is that he is one of those extraordinary individuals who have a strong inner core of confidence that can deflect even the worst of condemnations. Bayard was living as an out gay man in the 40's and 50's when would seem that being black and gay would be a tough hand to be dealt. Yet Rustin was having his first sexual experiences with boys in high school for which he claims never to have experienced any guilt. This same matter-of-fact attitude toward being gay was a hallmark of Rustin's personality that often vexed his later fellow activists, including his mentor pastor A.J. Muste....not that, that ever bothered or stopped Rustin from being exactly who he was. That is until an arrest in 1953 for "homosexual activity" with two other men in a parked car led to him pleading guilty to "sex perversion" and a 60 day jail sentence.

The conviction was hard on Bayard and shook him up. It also led to many of his former friends and allies who had stood by him in the early work for equal civil rights distancing themselves from him. For the first time, Bayard had come to see that his fearlessness about his own sexuality could have a negative impact on fighting for the civil rights of the black community. Later on this conviction would come back to haunt him time and again as his opponents would seek to use this conviction and his former membership in the communist party in the early 40's as a way to paint him as a deviant and a pervert and thus discredit his voice within the civil rights movement. By the time that Bayard came to hear of Martin Luther King...he already had decades of protest organisation experience under his belt for which his advice was much sought after. In his attempts to help MLK, his arrest record again resurfaced and King, rather then hurt his cause...distanced himself from Rustin. It began to be clear to Rustin that if he was to be of service to the black civil rights movement...his sexuality would have to become invisible or it would always be a liability. After journeying to Algeria to protest nuclear bomb testing by France. He would later return to America and be reunited with Martin Luther King and go to become the principle organizer behind the now historic March on Washington in which King gave his "I Have A Dream" speech that changed the world. 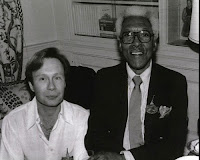 (Bayard and his partner Walter Naegle)

And so...In a sense, I do think Bayard Rustin had to chose which part of himself to defend. In the choice between fighting for civil rights for the larger black community and continuing to stay true living honestly as a gay man....helping the larger community had won. In the end, Bayard would not turn to activism for the gay community until 1977 and in 1986, gave this quote in testimony for a New York State gay rights bill:

Today, blacks are no longer the litmus paper or the barometer of social change. Blacks are in every segment of society and there are laws that help to protect them from racial discrimination. The new "niggers" are gays. . . . It is in this sense that gay people are the new barometer for social change. . . . The question of social change should be framed with the most vulnerable group in mind: gay people.

This was the quote that led me to write this piece. It was a strong statement made by a man who would know what it was like to be called that word. Sadly, I can't agree with Bayard's account that the civil rights movement has moved on the next group...I just don't think that work is done. As an example of why we can look to the events surrounding the death of Trayvon Martin. We have not yet reached a world where color does not matter. Granted...Bayard made this comment in 1986. It was a very different climate for gay people. What had begun as fighting for rights in the 70's had turned into a fight for life against the AIDS epidemic and a world that was content to blame it on the gays. Bayard had spent his whole life fighting for civil rights and the rights of others...perhaps it was just his time to start fighting for the part he had let become invisible so long ago....his gayness.

But regardless of how one feels about Bayard's comment above Watching his life unfold and seeing the work that he did to make these epic moments civil rights history happen...I admired Bayard for his early confidence in himself and his sexuality at a time when it was patently dangerous to be gay. Bayard took the beatings and never stopped working for the good of his community and the good of others...that takes a kind of character and courage that I admire. Hell...when I came out I wish I had half the self assurance that he had. And to know that LGBT people really are present in every moment of history doing amazing things should help anyone coming to grips with themselves a reason to hold their head up a little higher. Bayard Rustin passed away in 1987....I wish I had the opportunity to meet him while he was here and I wonder what he would think of the state of gay rights now....are we doing enough?

Bayard Rustin's story is a black story...it is a gay story too...must most importantly it is the story of an uncommon man who shone a very bright light for us all. I highly recommend renting Brother Outsider and taking a moment to learn about the life of this remarkable man.