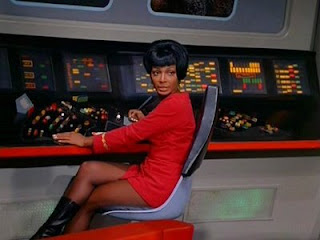 
(This was the only copy of this segment I could find. Sorry for the poor volume...Transcript below:)

Roddenberry:   I was pleased that in those days when you couldn't get even...Blacks on television, that I not only had a Black, but a black woman and a black officer....and that'll show em.(laughs).
Nichols: I told Gene after the end of the first season that I would not be returning to the show....that I wanted to return to my first love which was musical theater. But I didn't know that meeting a Star Trek fan would change my life...
I was told that a fan wanted to meet me and I turned and looked in the face of Dr. Martin Luther King....I was breathless. He says, "Yes I'm the Trekker..I am the Star Trek fan". And he told me that Star Trek was one of the only shows that he and his wife Coretta, and he would allow their little children to stay up and watch.
I thanked him and told him that I was leaving the show.....All the smile came off of his face and he said, " You can't do that." He said, "Don't you understand that...for the first time...we are seen as we should be seen. You don't have a black role.....you have an equal role."
and when I went back to work on Monday morning, I went to Gene's office and I told him what had happened over the weekend....and he says, "Welcome home. We got a lot of work to do."


As the last words of this remembrance were spoken...I sat in my living room with cleaning materials in hand and wiped a few misty tears away and my emotions threatened to overwhelm me. It was everything I had loved about the series....everything I hope for our  world...unfolding in one small, incredible, real-life moment. I couldn't help but give a silent little cheer. It was only one person..and one small choice...but it made all the difference to thousands to follow...and not just the fans. Not only was Nichols seen...but so were many other black actors in smaller but no less equal parts for the length of the series. Star Trek also has the distinction of featuring the first televised interracial kiss...something that would have sent much of the public into utter spasms and illicited cries that the very fabric of society was being torn assunder. Star Trek Broke ground for many shows that would follow in it's wake. 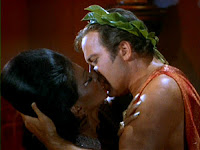 But as a gay person...I can't help but, as the unspoken meaning of Lt. Uhura was a victory for the visiblity of the black community...I wonder if the gay community has reached that point yet? Are we being seen as we should be?    There are many gay characters on Television, the news, and in politics. Modern Family even brings the notion of gay families and adoption to a prime time audience...and yet, sometimes it's still a big deal when a simple kiss is shown between two people of the same sex. Even Star Trek shied away from gay characters in all but the tamest and most general of plot circumstances....and then, only in the 90's.

Also, the gay experience is not exclusively male...or white. Even with all that our family does on YouTube to help raise aweness...we can't show you what it's like to be gay and a woman...or gay and black. The gay community comes from all races, all communities, all religions, all creeds...but is that facet of gayness also seen by the public at large? Is it even possible? With so many depictions of gay life out there...and so many permutations to LGBT life itself that could  be shown....do we have our own Lieutenant Uhura's to give a world an expanded...and non-caricature view of gay life? In my opinion, even though we have many famous LGBT faces...we still have a very long way to go if the goal is for the world to see us as we are and find a little piece of themselves in that view.

During my families recent trip to Disneyland this week, it was interesting to note the looks that our family would get from strangers. Nothing brings the disparate parts of humanity together better than a two hour wait for Splash Mountain. That day, the park was full of oversee's visiters and midwesterners, most of which were large traditional families with aunts, uncles, and kids in tow....And here we were with the kids calling us "Daddy Bryan" and "Daddy Jay"...we broadcast "same-sex" family pretty clearly. As we wound through the turnstiles I couldn't quite ignore the sensation of being watched as some people made no effort to hide there frank appraisals...at all. But I wonder what they saw? The paranoid part of me fills in the blanks with all sorts of negative judgments...and from some older folks they were very plain to see. For many others, we may have been the first gay couple with kids they had ever seen outside of television...I wonder what it meant to them? Alternately, they could also have been trying to figure out where our wives were and why the dads had the kids....It's impossible to say. It is equally as likely that they were watching us and thinking..."Those guys aren't nearly as funny as those guys on Modern Family. In fact....they're kinda boring." ...And then I hope a light turned on for them.

When I was a kid watching Star Trek, Star Wars, Battlestar Galactica, and Buck Rodgers....I didn't think about the race of the characters. It was all lost on me. I wanted to beam to far away places and travel the universe and I couldn't figure out why the rest of the world did not share my obsession with exploring the universe. I think it is because of shows like those that I got so frustrated with the world as it really was....divided and in conflict. It seemed that the noble visions of shows like Stat Trek would never happen in my lifetime.  After all, if we can dream it...why can't we make it happen? Beam me up Scotty, I want to go there...

Until next time dear readers...Live long and prosper......

P.S....for the Trek is better than Star Wars guys who will undoubtedly pop up here, please watch the following announcement from another gentleman who lives at the intersection of race, sexual identity, and Star Trek... (Sorry Twilight fans...I had to go there)