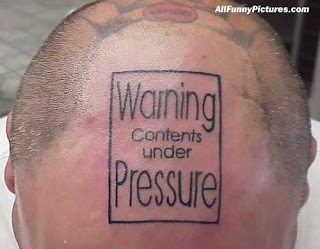 Wow...thats the first time I have EVER seen the President get angry, even if only for a millisecond.

alot of comments and points of view circulate regarding this event. Some see it as a natural reaction to a President who makes loud claims of support for the gay community whilst allowing his administration to work against that same community. Still  others view the actions of group like Get Equal as the misguided temper tantrums of people more apt to erode what support we have in the White House.

Personally, I think their both right. This type of action starts to scare people when it ceases to be isolated events and starts to become the status quo. That enevitably makes some people shy away. However, on the other hand, it puts pressure those who are the focus of protest. Notice that President Obama doesn't really get impatient until it becomes clear that repeating the same casual talking points he has been repeating all year doesn't imediately mollify the protesters. Then the message starts to set in that these people are expecting him to do something and that giving more speaches isn't going to fix it. Perhaps he will rethink his strategy of "letting congress take the lead", when he said during his campaign that "he" would work to end Don't Ask Dont Tell?

Instead, all we recieved to date is news about ridiculous Pentagon studies while more soldiers continue to get discharged. We also hear of the White House Department Of Justice releasing homophobic statements against a repeal of DADT...and the gay community in general, with impunity. THEN we get wind of rumors that lawmakers are being told not to put the repeal of DADT on the next Defense Appropriations Bill....Um, What are we supposed to think? Is President Obama not these agencies superior? In many cases their direct boss? How would it not appear as if he's telling us one thing while doing another? If he wants us to believe he's for a repeal, he'll need to do more than shout down protestors at fundraising events. 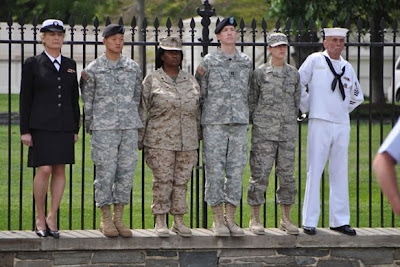 In related news, the White House fence has again become the site of a DADT handcuff protest. This time involving six individuals including(PHB):

Lt. Dan Choi   served as an infantry officer with the United States Army in Iraq in 2006-2007. Choi graduated from the United States Military Academy at West Point and is fluent in Arabic. In June 2008, he transferred from active duty Army to the New York National Guard. After coming out on The Rachel Maddow Show in March 2009, he was notified that the Army had begun discharge proceedings against him. Choi is a founding member of KnightsOut, an organization of West Point alumni that advocates for the rights of gays and lesbians to serve openly in the military, and he speaks frequently in support of rights for LGBT members of the military.


Capt. Jim Pietrangelo II,   a former infantryman and lawyer originally from Ohio, served in the United States Army until he was discharged in 2004 under the Don't Ask, Don't Tell policy. Pietrangelo fought in Iraq in 1991 as an infantryman and returned as a JAG officer for the second Iraq War. As he was readying for a third combat tour, he was honorably discharged for declaring he is gay. Pietrangelo sued the government, charging that the policy is unconstitutional. He appealed to the Supreme Court, but in June 2009, the Supreme Court rejected the case and refused to intervene, at the request of the Obama Administration.

Petty Officer Larry Whitt was born in Barnwell, South Carolina, and grew up in Florida. Fulfilling a lifelong goal, Whitt joined the Navy after high school and served for 12 years. He received the Outstanding Sailor Award aboard the USS Compass Island, was a Sailor of the Month aboard the USS Caloosahatchee, and retired as a Petty Officer First Class. He was stationed with the Office of the Joint Chiefs of Staff, Pentagon, and received a Joint Service Commendation Medal, two Good Conduct Medals, and a Navy Expeditionary Medal. Whitt was honorably discharged in October 1982, after he requested discharge for fear of being turned in for being gay. Currently, he is the Color Guard Coordinator for the Florida Gold Coast Chapter of American Veterans for Equal Rights in Ft. Lauderdale.

Petty Officer Autumn Sandeen   was born in Northridge, California and raised in Los Angeles's San Fernando Valley. Sandeen joined the United States Navy in 1980 as a Fire Controlman. She served on two Guided Missile Fast Frigates as a Mark 92 Fire Control System technician, and one Guided Missile Fast Frigate as a Mark 15 Close-In Weapons System technician. Her last ship was the Third Fleet Command Ship, the USS Coronado, where she served as a Mark 15 Close-In Weapons System technician from 1996 to 2000. She retired after 20 years as Fire Controlman First Class. At the end of 1999 and beginning of 2000, Sandeen was sexually harassed by a subordinate and Executive Officer for being perceived as an effeminate gay male. After retiring from the U.S. Navy, she was awarded a Veteran's Administration Service Connected Disability rating. She began transitioning as a male-to-female transsexual on February 6, 2003. As a transgender activist, she has worked with many transgender advocacy organizations. She is currently the transgender chair of DOD FedGlobe, and she writes for the blog
Pam's House Blend.

Cadet Mara Boyd,   originally from and currently residing in Ann Arbor, Michigan, completed three years in the Air Force ROTC program at the University of Colorado at Boulder and graduated in the top ten percent of her basic training class before she came out as a lesbian to her commander in the fall of 2002 and was honorably discharged under the Don't Ask, Don't Tell policy in June 2003. Before she came out, Boyd held the position in her cadet detachment of Cadet Captain, Character Development Officer, having been nominated by the officer cadre and cadet corps to handle the character development and moral guidance of the entire detachment. Boyd's ROTC scholarship, which had paid for two years of nonresident tuition, was revoked upon her discharge, and the government demanded that she repay her scholarships and book stipends. Boyd ended up with $30,000 of tuition bills to pay. Boyd returned to UC Boulder and completed her degree, but she is still paying back the scholarship debt.

Airman Victor Price,   originally from Asheboro, NC, served as a Bioenvironmental Engineering Specialist with the United States Air Force. During his tour, he obtained a BA in business marketing at Delaware State. A Senior Airman, Price was honorably discharged in 2000 under Don't Ask Don't Tell.

Corporal Evelyn Thomas,   who was born in Los Angeles and grew up in Texas, joined the Army National Guard and then the U.S. Marine Corps. She served at Camp Pendleton for four years until another Marine found a letter in her locker about her relationship with a woman. She was then honorably discharged in 1991. In October 2009, Thomas founded a ministry for gays in the military who fear they may be discharged for speaking openly to base chaplains about their sexuality. The Sanctuary Project Veterans is a ministry of Pilgrim United Church of Christ in Carlsbad, CA, and it provides a safe haven, support, legal advice, and services for soldiers harassed due to the Don't Ask Don't Tell policy. 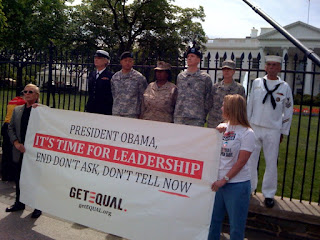 So we have gone from two people chaining themselves to the White House fence to six. Perhaps next time it will be twenty. The actions of a few are slowing growing into the actions of many. Call it what you will...revolution, reactionism, shooting ourselves in the foot....the message needs to be sent and the pressure to act is getting raised. That same message is now being picked up and passed on by more and more people. We don't live in an age anymore, when things can be accomplished in secret so easily. We are watching. We are checking your actions against your speechs. We get wind of comments made in the halls of power when no one else is supposed the hear. It gets facebooked, tweeted, and Youtubed around the globe before you finish your morning coffee. We are watching and we are talking to each other. Its time for some transparency from our President. No more smoke screens, its time for  clear and direct action.
Posted by GFV at 1:24 PM