One of Harvey Milks most famous quotes is, "You gotta give em hope." Sometimes thats easier said than done. As I sit here this morning considering what to blog about, hope seems in short supply. As we speak thousands of barrels of crude oil are pouring into the ocean every second and no one knows how to stop it, recent news indicates that the economy is NOT turning around as previously thought and it has been said that reports that it had were deliberately crafted White House spin, We are STILL fighting wars that have no end in sight, the country is more divided than ever along political lines and the tone of conversation is beginning to bend toward violence.

In gay rights, it seems that the tremendous and unexpected progress we saw a couple of years ago has hit a wall. Major gay rights legislation lay in limbo while democrats dither about studies and work to delay any progress whatsoever. Meanwhile, all the Pentagon has to do is wait for the clock to wind down and a new political balance of power to take effect in Congress. Marriage rights are a revolving door, granted one minute and then challenged incessently at the ballot box till the public is weary of the debate. We pass hate crimes laws only to have those crimes not actually be classified as such when they occur. Africa has become a hot bed for anti-gay legislation leaving the lives of of their LGBT populace in peril daily.

Doesn't leave a lot of hope does it? Sometimes I lay awake at night while the moon shines in my bedroom window and wonder where the world is going because the deck seems so stacked against us.


Its moments like these when I'm challenged to look a little deeper. Ten years ago the thought of being married to another man was an impossibility and now here we are legally married in the state of California. And no matter how bad the backlash, eventually more states and countries will follow...perhaps my own state will even allow it to be legal again. It may not happen as quickly as I want...but then, what does?

DADT and ENDA are a breath away from a vote regardless of political stonewalling. The days when you could not count on recieving any sympathy for these issues are gone. While these pieces of legislation remain balanced on a knife edge...more people see the neccesity of lifting the militaries ban on homosexuality and workplace protections. Thats a huge step over the climate that existed when Don't Ask Don't Tell was enacted ...and ENDA has been a very long time in coming.

We are measuring our change now, not so much in pieces of legislation passed... or states with marriage rights, but in the changing attitudes toward gay and lesbian people. We are in the public eye now more than ever and that has a major effect. One is the major pushback we are recieving from religious conservatives but the other is that their numbers are fast dwindling. More people are beginning to see gays and lesbians as people and less like strange poorly-understood "others" or shadowy conspirators. More people are capable of seeing the lives of gays and lebians as something akin to their own lives...and that is the biggest change we could ever hope for. With out it, we would not even be having discussions about marriage equality, military service, or work place protections...we would still be deviants and criminals. To some, we still are.

While that kind of change can be frustrating to deal with, its also more lasting. It's not the sudden, sweeping change promised by our president that has yet to manifest itself. It is more like the winds that carved the Grand Canyon or the retreat of the glaciers. Its a reminder that change and hope also must come with a healthy dose of patience and a certain perspective of where we have been, as well as where we still have to go. 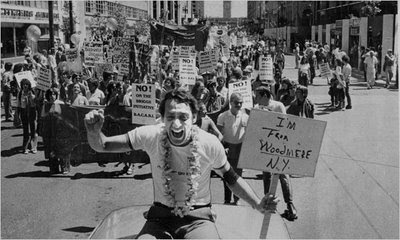 I don't mean to give the impression that we sit on our hands and watch the ice melt. Far from it. Another great quote of Harvey Milks is, "My name is Harvey Milk and I am here to recruit you". Harvey helped galvanize a community to action that was afraid to walk home alone at night from a gay bar. He helped them believe that they could do something about their lives and so, his call to action resulted in  electing our first openly gay politician in Harvey Milk. It was the first of a thousand steps ...and a major setbacks...that has lead us to today, and a different world than the one that Harvey knew. But without the spirit of action that people like Harvey Milk  inspired, where would we be?

So, after a sleepless night under the moon, wondering where it's all going to go, I start a knew day and sit down to breakfast at our very crowded little table. I see my husband, who is already anxious to get started on todays chores, I also see my kids and our nephews and nieces ready to plow through breakfast so they can go play. The coffee tastes so good I just want to crawl in and bath in it. Then the baby flashes me a big smile so I can see that she has another new tooth today. The sun streams in through the dining room window, warming my back and I realise that life is built out of small moments too, that are no less important than the big earth shattering ones.


We do the best we can to help make the world a better place...but we do it for these small moments. When it seems that the world is intent on burning itself to the ground and hope is hard to find, I have to remind myself where hope comes from. Hope may not be found in politics or big changes, though it sometimes can be. It's found in why we live and in those we live for. It's in the fact that our lives go on regardless of what takes place in the halls of power. We live our lives the best we can. We do the best we can to try to make the world how we want to someday see but, along the way... we kiss those we love, find things to laugh at, and live well (which is always the best revenge). Its not exactly  a grand statement of wisdom, but its how I find my hope when everything seems to fall apart. Where do you find yours? 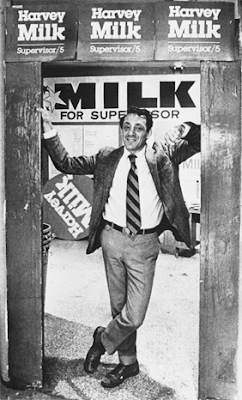