The DADT Repeal and Other Farces 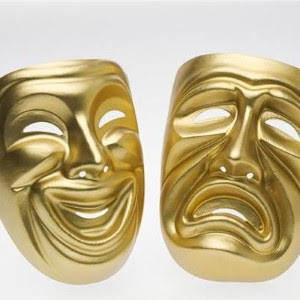 Yesterday Pams House Blend ran a breaking news post that DADT could possibly have been voted on that very day...after languishing in committees and being studied to death, Harry Reid was going to grab everyone by the short and curlies and make them come in for a vote....."Dam" I thought, "That's big news". So I held off blogging to see if I would have big news to share with all of you...and I waited....twitter campaigns were launched...senators were called...and I waited some more. By evening, nothing had manifested. To say I was underwhelmed by the lack of action would be putting it mildly..completely unsurprised would be closer to the truth.

This morning brought an avalanche of blog updates about what went on behind the scenes and most of it is laughable if not downright obscene. A vote is again scheduled for today, 12:00 eastern time. Which means that it could be happening literally as I am writing this blog post...or it could be yet another pause in what I have come to think of as the Don't Ask Don't Tell Comedy hour...if only it wasn't so close to tragedy. You'll, laugh till you cry!...or mostly just cry...


Senator John McCain was oddly nowhere to be seen as it became Maine Senator Susan Collin's name that was reported as being the loudest voice protesting a vote on the Defense Authorization Bill with a DADT repeal attached. Not that this is anything new....Senator Collins, while publicly supporting a repeal was one of the handful of Moderate Republicans that Democrats had hoped would vote to break McCain's filibuster last time around. She did not on the basis that  democratic Senator Harry Reid was rushing a vote without allowing a fair amount of time for debate and for to add admendments into the bill.

This is, for the most part, still her objection to a vote today. As Senate Majority leader, Reid made mention of intentions to bring a vote yesterday, it prompted Collins to say  that there was no way Republicans were going to support a vote until her and Joe Lieberman finalized a deal that would allow fair time to debate and throw a few goodies thrown into the bill...it is Christmas after all. Oh...and did I forget to mention that they won't vote for the bill at all unless you approve the tax cuts they've been after? 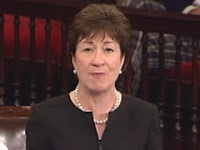 "Senator Joe Lieberman and I continue to negotiate in good faith with the Majority Leader to try and come up with a fair process under which the important Defense Authorization bill could be considered in the limited time remaining in this session. Without a fair process, the motion to proceed to the bill would likely fail in the U.S. Senate.


"Senator Lieberman and I requested a meeting with Senator Harry Reid last week during which we outlined a specific plan for allowing debate and amendments similar to how the Senate has considered the authorization bill in the past.

"It wasn't until 1:35 pm today that I received a legitimate offer from Senator Reid, which I consider a good starting point. We made a counter offer which would provide sufficient time for debate, and includes protections to help ensure that Republicans would be able to offer a limited but fair number of amendments that are relevant to this legislation.

"I am encouraged that the Majority Leader decided to postpone the vote he had scheduled for tonight. I urged him to do this so that we could consider the tax legislation first, which I believe could be on the floor as early as tomorrow and completed quickly. At that point, I believe we could move immediately to the Defense Authorization bill under a fair agreement, and I would vote to do so. I would hope he carefully considers our proposal. I believe we have outlined a very clear path forward for the Majority Leader to take that would allow this very important debate to occur."

"I urged him to do this so that we could consider the tax legislation first"...nice to know where your priorities are Senator. The translation I take from this statement is that you would rather ensure that those who have no worries in this economy are made richer...this is of higher priority to you than ensuring equal treatment to gay and lesbian soldiers. I wonder if the people of Maine agree with those priorities?
Senator Collins has been the one to throw down the gauntlet. In order to pass this repeal...which Senator Collins has claimed to support...we have to give an obscene tax break to the rich? Are you freakin kidding me? In essence...this is holding the civil rights of gay Americans hostage until the demands of the republican party are met. As a gay American who has an interest in both issues, this feels as if I need to chose between civil rights that I care deeply about and the long term health of my country. It's unconscionable...and all the worse coming from a Senator who's claims prior to now have been about allowing fair debate.
We knew this was coming...perhaps not from Senator Collins, but Senate Republicans let us know early on that this was an issue for them. A stupid, self defeating, and horrible self-destructing issue. Pleasing their patrons counted far more than their constituents it seems. In addition, given the furor that President Obama's tax concessions have incited within the Democratic party, with major Democrats vowing to fight against those no matter what...it appears that resolving the tax issue isn't going to be resolved any time soon...thus if thats a condition of a Republican vote...the DADT repeal is dead.

But the show continues to go on in all its comical glory. With every new player adding another layer to the farce. Does it matter now when previous foe's to  repealing DADT,  like Senator Sam Nunn change their minds to come out in favor of the repeal? It's easy to make warm and fuzzy statements when you know there isn't a chance in hell of them ever coming true isn't it? Does it really move the issue much when Senator Carl Levin warns that if we don't see a vote this week theirs no way in hell it will get done at all? Or...will the nearly 600k in collected signatures asking for a repeal of DADT that were given to Senator Collins office change her mind about taking the hard bargain stance? The whole thing appears as if one huge joke. A lot of flash....Much back and forth...but all of it much ado about nothing...and I'm not laughing.

Never has it felt so close to getting rid of this awful policy..and yet we have to question whether that feeling is real at all, or a part of the smoke and mirrors of politics. If a vote happens...which seems a longshot now...that would count as real action. That would surprise me because it looks to all the world like they intend to run out the clock on this legislative session, leaving them no option later down the road but to cry, b*tch, and complain if the courts do what they would not. So how many more Senators need to come out in support before it matters? How many more military brass have to give the o.k? How much more positive public opinion is needed to make this clear to them, before these people stop playing games with peoples lives and do the right thing for its own sake? It wasn't yesterday...will it be today?...ever?