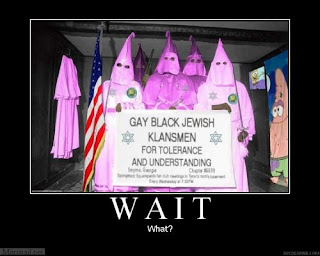 The American Family Association....The Family Research Council...Dove Outreach...Illinois Family Institute..American Family Association...All of these names would lead the reader to believe that these are benign, altruistic organizations who's only intent is to help families. Indeed, the image of a dove is synonymous with peace for most of us. Add in the word "American" and it would seem to indicate patriotism and national pride...what could be bad about that? And the word "Family" leaves little intent as to whom the actions of these groups are directed toward.....right?

Except you would be wrong.

What all of these groups have in common is not just their naming conventions but a designation by the Southern Poverty Law Center(SPLC) as hate groups. They spend all their  time and resources lobbying against The GLBT community in Washington, spreading  false and damaging information about the gay community, work to block basic legal protections for LGBT people  and foment discrimination at every opportunity. These are the people who publicly call for us to be criminalized, Blame us for HIV/AIDS, call for us to be placed on deserted islands, and liken us to the greatest danger this country has ever known. These are organizations that, despite their names, work to make an enviroment in which its o.k. to practice violence, discrimination, and utter hatred in the name of religion...in the name of family...and in the name of truth.

And boy are these guys angry now. After years of making gays and lesbians a target...they certainly don't like being treated the same way. Their protests sound like the keening like dying animals....


I don't think there is a gay or transgendered person alive who has not been a victim of the "family values" type of people. You know...the ones who get wind that a gay person may exist within the ten square mile radius of the universe that they are the center of...so they saddle up the posse, grab the torch and pitch forks, and head off to make that persons life a living hell. All in the name of politely smiling conservative Christian values of course...a name that by itself would mislead people to believe that they hold some exclusive moral high ground that would elevate them over such petty human emotions as hatred... or ignorance, and sanitize their actions against their  fellow human beings. Its such a common meme that it's the reason why my husband and I chose the term in our "gay Family Values" YouTube channel, as an attempt to take back the notion of family from those who would have us stripped of the ability to be one.

People like Brian Fischer of the American Family Association..


Fischer has made claims that Hitler had to surround himself with gays because only were savage enough to commit such atrocities. He has made the assertion that homosexuality should be legally considered the same as I.V. drug use..and he is the charming fellow who asserted that we should all be put on an island somewhere to "die out". Or his most recent..gays are responsible for AIDS so we should foot the bill for HIV research. He's blatantly offensive and unabashedly discriminatory and constantly complains that the views of men like him are being silenced even though he continues to vent his bullsh*t online, on radio, and to anyone who makes the mistake of making eye contact with him. As crazy as he is, he is still considered part of the "pro family" crowd.

Mr. Fischer does not like being considered part of a hate group:

the first and last refuge of a man without an argument is name-calling. If you can’t win on the merits of the case, call your opponent a racist or a bigot or a hater and the debate is supposed to be over at that point. So you know as a matter of fact that the moment someone stops debating and starts name-calling, they’ve lost the argument. It’s an admission of defeat.

well guess what? You are Blanche...you are..

The Family Research Council and their front man, Tony Perkins put out written materials claiming that gay men are pedophiles. Perkins himself has also gone before Senate committees armed with only the discredited research of Paul Cameron to express his concerns about gay soldiers spreading AIDS through the military and claiming those same gay soldiers are likely to sexually assault their straight fellows if allowed to serve openly. Yet this man and his organization are constantly invited on networks like CNN to represent a fair minded and apposing view on gay rights....as if...

The FRC does not like being considered a hate group:

"This is a deliberately timed smear campaign by the SPLC. The Left is losing the debate over ideas and the direction of public policy so all that is left for them is character assassination. It's a sad day in America when we can not, with integrity, have a legitimate discussion over policy issues that are being considered by Congress, legislatures, and the courts without resorting to juvenile tactics of name calling.

Theirs that name calling again...

The SPLC also makes mention of The National Organization for Marriage, though they stop short of officially including them in their list. If you don't know that NOM has been behind every single states initiative to block or ban gay marriage and civil unions...then you haven't been reading this blog long. They were also one of the driving forces behind the ousting of the Iowan supreme court justices who voted to allow gay marriage in Iowa. Maggie Gallagher and Brian Brown try to put a moderate face on the type of hate and animus that the groups listed above come right out and say....its not about protecting marriage, its about stopping gays at all costs..including lying. Remember that coming storm commercial anyone? Or King and King?

Ever the spin doctors..Nom tries to paint the SPLC's actions as a vicious attack on an otherwise fair minded,  but opposing viewpoint to gay rights...if only their actions did not bely their claims of fairness....

This report is not an attack on NOM but on the majority of Americans who believe that to make a marriage you need a husband and wife," said Brown. "It is also further proof of what NOM has been saying: today’s gay marriage movement is no longer about tolerance, live or let live—it’s about driving out dissenting voices from the public square. Gay marriage now serves as the tip of the spear to a new campaign to demonize and generate hatred against those who adhere to traditional views of sex and marriage.”


“I’m very proud of the message that NOM has carried consistently and with great love and courage:

Then may history bear you out sir, though I don't think it will. Personally I see neither love, nor courage in your actions against my family and those like mine....nuff said. 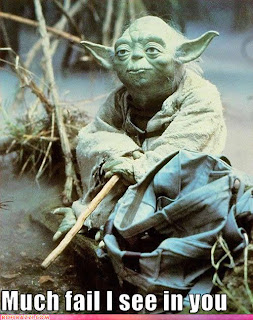 But lets look past their hysterical cries of name calling to look at the names they use daily and deliberately..No, not the names they call us, we know those all to well....the names they chose for themselves.. in this short sampling of the list provided by the SPLC:


They use "American" and "Liberty" as if they have an exclusive right to patriotism. They use "concern" as if they are merely correcting you for childish behavior. They use "research" as if they just want to learn. They are "councils" and "commissions" not angry mobs bent on cleansing "Teh gay" from the USA. They use "truth" as if they are bringers of light...not sorrow. You would think these individuals ride in on a white horse with light streaming from them and radiating kind concern...not the angry bringers of prejudice and misinformation that they are.

The worst of all is the use of "family". This is the iron fist in the velvet glove. They would lead you to believe that they support families. Do they? Do they offering counseling services if mom gets caught up in drugs?
Will they help a young couple decide if they are ready for marriage? Will they provide food for struggling families that can barely keep the lights on?...no, they don't. Their organisations have nothing to do with what they are "for" and everything to do with what they are "against"....us. We know this to be true because their every action is to lobby, protest, and demonize homosexuality at every turn. They are not "pro family" or "pro marriage...It is not and has never been about protecting families from drug use, poverty, or divorce....just from us...

Sinners..perverts...pedophiles..The names they have been calling us for generations.

Use of the term serves their purpose of implying that we are a danger to children. If they are protecting families...what are they protecting them from? And when the name does not scream that out loudly enough..they will say it outright. Like NOM's false assertions that gay marriage will be taught in schools. Like the FRC's claims to false statistics that say gay men have a higher chance of being pedophiles. Both of these points are wrong and have been proven wrong time and again by qualifies authorities. They've been called to the carpet over this thousands of times...yet they repeat it. They claim "Judeo-Christian values" and willfully lie in the name of stopping gay rights. I guess one sin is justified in the attempt to crush another perceived one. Funny...I didn't think it worked that way.

In the end it doesn't matter what configuration of virtuous sounding words they string together. Once you hear them spoken aloud, you know whats coming and it ain't good. The groups on this list have earned their designation and as Brian Fischer claims to do, they can "were it as a badge of honor". But lets not lie and pretend your about one thing when you not. If it's an "honor"...then own it...and your real mission. No one is fooled by your claims of kindness or "love the sinner" decency. And one day history will have a very unkind list of its own...will it be such an honor then? 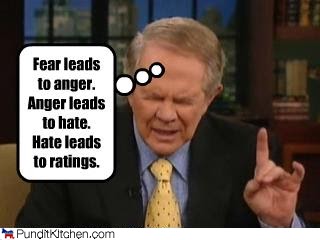