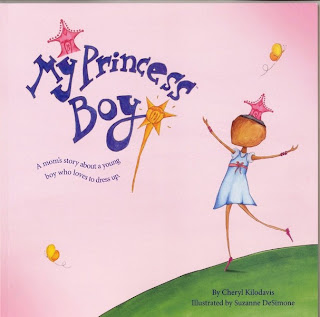 But 2010 also offered us a ray of hope in the form of awesome parents who stood by their children and helped them understand that they were loved and "all right" just as they are. We had Nerdy Applebottom, the mother of the little boy who wore a Daphne costume for Halloween...and Katie the Star Wars Girl. Both of these kids had awesome parents who only wanted their kids to grow up healthy happy and strong. Fortunately we have one more to add to the List....Cheryl Kilodavis and her son Dyson, about whom she has written the children's book "My Princess Boy".

So What if it isn't just a Halloween costume, or a star wars thermos...a boy who wears dresses?! This one has caused the Internet to come unglued and the fundies to howl. But the real question is again, "why is a boy in a dress so scary?"

Some background is in order:

Cheryl is a mom to a happy and vibrant...now five year old boy. Cheryl reports that from the age of two Dyson began to show a preference for all things pink and sparkly(my daughter would so love him). As she notes, she would come to pick Dyson up at preschool only to find him in a dress that he loved. Her solution? Thinking that the problem was merely a lack of choices in boy dress up items she goes to the store and stocks up on karate and band uniform dress up clothes. Okies, all good so far....then comes day two. Mom goes to pick up her son at preschool after having donated a variety of boys play clothes, only to find her son in a different colored dress.

Whats a mom to do? Well, Cheryl admits to what most parents would feel at first: (via WaPo)

He was so happy. He said 'Look how pretty this dress is,'" she said. "I was worried about if the other parents were looking at him, and were they looking at me."


The parents had Dyson evaluated by a medical team that included a psychologist because, Mrs. Kilodavis said, "Everything out there is always about gender identity confusion, and I wanted to make sure my child was happy with who he was."


The verdict? He is. He just enjoys tiaras and ballet leotards, but also basketball and climbing trees — all interests that tomboy girls delight in routinely without an eyelash batted.

Having reached a place of acceptance a year and a half later, Cheryl wrote a book called "My Princess Boy" in the hopes that it would help educate other kids about issues like those her son faces. The Principle of Dyson's school loved it and ordered copies for other classes and word of mouth continued to spread....and with it, the controversy. Dyson's parents have been accused of many things, among those are encouraging his behavior at an age when they could have corrected it...and worse...of using their son to sell books to the detriment of his later development.

Much of the criticism began with this interview one Seattle day time television show, "New Day":


Don't read the comments on this video unless you are prepared for an ugly attack of the "beat em straight" types. It's horrifying.
In my opinion...and only mine. I think that this families love their her son will outshine any criticism or attack that can be thrown at them. As I have said before, the things that kids do when they are young are not an indicator of what their sexuality will be as adults. Put simply, wearing a dress will not make him gay if he is not already, nor does it mean he wants to be a girl. He may drop the dresses entirely one day...or they may carry him to his fame one day as a world class(and possibly heterosexual) fashion designer...who can tell? His parents have shown heroic love and acceptance that will give their son the tools he will need to stand on his own someday. I do not see in their actions an attempt to mold him or encourage a behavior that is not native to him. They have done nothing more than accept him, even if it came at the cost of some heavy soul searching and a few doctors visits to get there. Would that more parents would accept their children in that way..perhaps the world would be a happier place.

Cheryl has also been accused of taking advantage of her son by writing a book about him and taking him on television. It is a similar criticism that was offered to Nerdy Applebottom when a guest psychologist on CNN hinted that blogging about her son in the Daphne costume represented a breach of her sons privacy that he may come to resent in later years. Cheryl has gotten extra criticism because of the book...which she intended as an anti-bullying tool.
Given as one who knows, whenever you put your children in the public eye, your going to get hell for it. Jay and I get tons of negative comments about our decision to include our children on camera. Its been said that Daniel and Selena cant really be ours, but that we borrowed them from another couple to be in the videos. We have been accused of indoctrinating and staging our children. Force feeding them a diet of gay rights..(utter crap). We have been severely questioned about what the kids will think when they are old enough to fully grasp what they were a part of.In response, all I can say is that we just show our life in its good, its bad, and its ugly. We did hope to change hearts and minds but not our children's...in our viewers who may not have seen what a gay family looks like.
Did Cheryl, Nerdy Applebottom, or Katie's mom do any differently?....I don't think so. They sought to bring awareness to the ways in which our society treats those who are different and in these cases it happened to be their children that were affected. They also make a big point, that the cruelty begins here...in childhood. As a parent, if you thought you could change the world so that your child would never suffer that hurt, wouldn't you do all that you could? 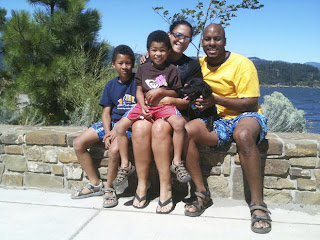 For this reason Cheryl and and Dean(Dyson's dad) get added to the roll call of awesome parents with even more awesome kids.They are a ray of light and hopefully a sign of changing times. Little by little the world changes. Hopefully..in a few generations perhaps, what sets us apart as different will matter less than what makes us the same.
Happy Holidays everyone...
Posted by GFV at 6:46 PM