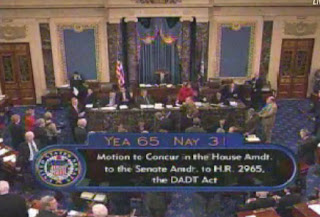 Merry Christmas Everyone! Santa Dropped a present off early. Today is a historic day!..Don't Ask Don't Tell is gone!

In a vote of 65-31, the senate has voted to adopt the DADT compromise repeal measure. My jaw dropped when I heard because I honestly didn't expect it to happen, but score one for justice. It went down a little something like this...Darth McCains forces of discrimination and injustice were closing in on the plucky rebels. There seemed no way out as time became the enemy...would there be enough votes?...It all came down to one fateful moment as a handfull of equality minded Senators staged a last ditch assault against a horrific monolith of evil...

Lol...you know I was gonna relate it to Star Wars some how. But in all seriousness todays vote truly was one in a million. Much as this victory didn't end the war for the rebels it certainly was a massive victory(and saved their bacon). So also is todays vote...it's not an end to the struggle but it is an incredible victory that will change the course of things to come.

But, for now...DADT still has some hoops to jump before it is truly only a memory in the public consciousness. For instance, it must still be signed by the Chairman of the Joint Chiefs of Staff, the Secretary of Defense...and the President. Assuming that happens without incident then implementation will occur...and no one knows exactly what the military has in mind for that which leaves us with a some what indeterminate timeline for when a soldier might safely admit to being gay without suffering consequences. That's a lot of room for foot dragging in my opinion In addition, this repeal made no accommodations for Transgendered soldiers, thoughI feel that is just a matter of time with this repeal.

However...lets be thankful for the victory we have. Me being a "glass half empty kinda guy just means I need to go fill it up and raise a toast in thanks.../cheers!

And I have to say...if Gay rights continues to parallel events in Star Wars, than its time to brace yourself for "The Empire Strikes Back"...I'm not sure I'm looking forward to the scene when McCain Captures Ted Olsen and  David boys and attempts to freeze one of them in carbonite...it might make that love scene a little awkward...

Congratulations to everyone and Happy Holidays!...as well as a super congrats to all the gay and lesbian soldiers out there who have just received and incredible vindication for their service.

A tally of how the vote went down can be found below the fold:

Thank you "yea" Senators one and all.