Happy National Coming Out Day! In honor of the day comes a story which makes you wonder at lifes sense of humor. Specifically, why some of the worst homophobes end up having gay children. Case in point...Jonathan Katz, a Washington University physics professor, came under fire in May for writing a paper in defense of homophobia in which he described himself as a "proud homophobe". 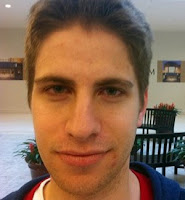 Jonathan Katz and his son, Isaac:
As you can guess, it was a hoot to read. What landed him in the news however, was the fact that he had been appointed  by President Obama to head up the BP oil spill clean up. Public outcry over this appointment ended with his eventual dismissal. Which I'm sure did nothing to curb his pride in his homophobic attitude. But here's something that did...Professor Katz's son, Isaac Katz, just came out of the closet as gay...and not in a private family way...but in an  article in the Saint Louis Post's online edition. stltoday.
In response to Dan Savage's "It Gets Better Project", here are some excerpts from Isaac's story...


When I was perhaps 10 years old, my brother called me a faggot. Neither of us was old enough to understand the concept of sexual orientation; he was merely teasing in the way older brothers do and using a word that had surely passed from the public sphere into his vocabulary via sheer osmosis. My father overheard him, however, and reacted in a manner I had never before seen. He was genuinely angry...

...My dad was angry not because my brother used a curse word — but because, simply and literally, he said that I was gay.


More than a decade has passed since my brother used that notorious homophobic slur. I am now 22, and, as it happens, I am gay. Further, I, personally, was depressed throughout much of my adolescence. Although anti-gay bullying was never a problem for me as a student at Clayton High School, being in the closet hardly helped my mental well-being. I was hospitalized for depression the summer after my sophomore year in college and tried to overdose on pills later that fall.

Many of us understand this story as it feels like a portion of our own. We hear how bad it is to be gay from our friends...our siblings..our parents...and it doesn't take long before those messages become internalised as our own. Isaac then goes on to discuss his feelings about his father and his dismissal from the BP oil spill cleanup...and the elephant in the room...His fathers treatise "In Defense of Homophobia".


My father is a physics professor at Washington University. Years ago, he wrote an article on his personal website in which he justified homophobia as a "moral judgment" about a person's actions. Even if one does not accept Judeo-Christian morality, he wrote, gays should be shunned because they are physically and morally responsible for the AIDS epidemic. Any person "cursed with unnatural sexual desires" should suppress those desires. Further, even if gays are thoroughly safe and monogamous, they are still morally culpable for the promiscuity that spread AIDS in the past...
...It is harder to stay away from homosexuals, I would imagine, when your son is one. When I told my dad I was gay, his immediate response was, "No, you're not." (My mom, by the way, was and is more supportive.) When my insistence finally overrode his denials, he echoed his online essay that I should deny who I am rather than to engage in an act so abhorrent as to love another man...
...I can't change my dad's thoughts about homosexuality overnight. Underlying his opinions and those of other homophobes is the belief that homosexuality is not ingrained within gay men and women, that someone attracted to people of the same sex should simply choose not to be a "practicing homosexual."

At Isaac's request, his father removed his paper from the Universities website. That may not be ringing acceptance...but its a great step forward. Isaac also makes it clear that coming out publicly was not to hurt his father over his views...but that he wanted to share his story in the wake of the many gay teen suicides, and to support Dan Savages "It Gets Better Project", where I believe his story will help bring change and a ray of hope to someone who desperately needs it.

What also brings change are the impact we can have on our families of origin just by being born. Even if its not humorous, its at least ironic that so many gay kids are born to people with such strong negative opinions about homosexuality. It was my experience growing up, as well as my husbands. Both of us came from gay unfriendly families. My father  used to say with disgust, "If any of my kids were gay...I would kill them!" and I would cringe inside. Today, as he's seen my life as an out gay man, I hear more accepting messages from him than negative ones.

Its almost as if life puts us in these situations in order to help give these people a personal window into the lives of those they direct such anger and intollerance at with the aim of cultivating more compassion in them...and perhaps in us. It certainly does not make our lives any easier....but it seems to happen with alarming regularity.  If its not their children coming out  them, it will be a parent...or an uncle...someone who will make them pause and reconsider what they believed before. Change really does happen....one son or daughter at a time.

Happy Coming Out Day Everyone.
Posted by GFV at 1:35 PM