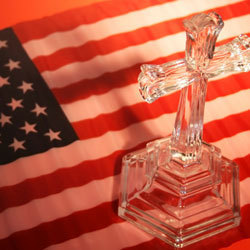 Sometimes I think that we've really lost touch with American history. Whether its the tea Partiers brand of "patriotism" or conservative "family values" politicians, there is a pervading Idea that America was founded on their particular religious ideals. Take for example these comments made by Senator Jim DeMint at a church rally in South Carolina:


“Hopefully in 2012, we'll make headway to repeal some of the things we've done, because politics only works when we're realigned with our Savior.”...

As homophobic and discriminatory as these comments are, they are not unique to Senator DeMint....Its not even the most troubling part of his quote. Whats more alarming is the idea behind his statement and the sharp uprise of religion in American politics. Were it not for Christine O'Donnells pronouncements of faith would she have won the Republican nomination being that the rest of her background is so littered with inconsistencies?...Or Sara Palin, who also makes no bones that she would bring her religious beliefs into the oval office, were she ever to be elected.

Ever growing is the number of politicians who find traction with the voters by ignoring the foundational Idea of the separation of church and state. The idea has been repeatedly put forth that America is a "Christian nation" and that Christians need to hold the reigns of government  and to enforce morality legislatively. This is has been created and Fueled by evangelical Preachers  like Lou Engle, Janet porter, and many others who view polotics as fair game for the pulpit. It is been echoed again by main stream Republican candidates and tea partiers alike. You can also commonly here it fall off the lips of average Americans who believe that America was founded with a musket in one hand...and a bible in the other.

Yet my problem with all this is not one of religion...but more a question....Where were all these people in elementary school when American history was taught?

Now..I went to school at the tale end of a generation that got a boilerplate version of history. Then, it was Christopher Columbus that discovered America..not Amerigo Vespucci...or even Viking explorers. I understand that now we know alot of new things that inform our view of American history and thats all to the good. However, I got the standard curriculum that most of the people preaching Christian dominionism would have received, so I believe that they can...and should, know the basics...like freedom from religious coercion, which is also a founding doctrine of our nation.

Jim DeMint is a United States Senator bound by the oaths of that office. He is also a man using his religious views to discriminate against gays, unmarried women, and anyone else he disapproves of. Clearly he feels secure in his discriminatory remarks by virtue of his secret backslapping supporters. However, I wonder what these people have to say about the first colonists to America...the pilgrims. 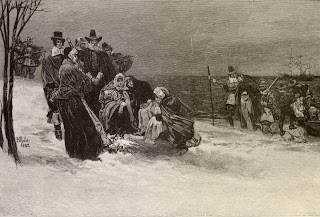 Some of the first people ever to bring a form of Christianity to North America did so fleeing the same type of religious intolerance that politicians and religious leaders seek to recreate today. History is rife with the violence of competing Christian factions and it was just that circumstance that led English Protestants to flee England and the control of the Anglican church. They first settled in Holland in 1607. Then, fearing that they were losing their English identity to dutch influence, boarded the Mayflower in 1620 for a horrific voyage that would launch their names into history forever as some of the first colonists to America. They fled their homeland From religious persecution...in order to worship as they chose, in freedom.

My own ancestors come from a very obscure group of french protestants called Huguenots. These were french protestants fleeing persecution by the Catholic church who practiced bloody massacres in an effort to wipe out protestant heresy in France. Among the many nations that the Huguenots fled to was America...where in 1562 they founded Fort Caroline in what would become Jacksonville, Florida. Indeed the first record of the name Leffew in America was an Isaac Le ffeure who came to America with his family in family and an entire shipload of huguenots in 1700....again, fleeing from religious persecution to a land where they could live and worship in freedom.

If America was founded on Christian principles alone, then why are Bible passages not enshrined in our constitution? Perhaps because even in the days of our nations founders, it was known that people frequently disagree when it comes to religion. Therefore, one of the first amendments to the bill of rights in the U.S. Constitution was created to establish a separation between the church and the civil authority in order to prevent such abuses from happening again.

Congress shall make no law respecting an establishment of religion, or prohibiting the free exercise thereof; or abridging the freedom of speech, or of the press; or the right of the people peaceably to assemble, and to petition the Government for a redress of grievances.

The men who wrote this had their own deeply held beliefs and spirituality...not to abolish it. It was written to ensure that everyone was allowed to practice their religion(or lack there of) without having to stand in opposition to a state sponsored religion and suffer the violence that so many had already endured. This was a bill meant to protect the religious rights of all...including modern day Dominionists like Lou Engle and Janet porter...or politicians like Senator DeMint. In establishing that gays and unmarried women should be denied due protection of the law and fair workplace protections, they break the fundamental line between religion and government that actually protects their ability to believe we are sinners in the first place. They weaken their own ability to freely practice their own religion. How would these people feel if Dominionist Catholics were on the rise? Terrified I imagine. 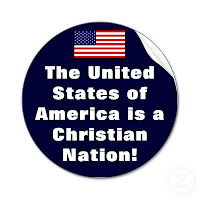 The whole thing is like an episode of survivor. Right now, the major religions stand in alliance against gay marriage..or anything gay oriented for that matter. We stand on the outside trying to make the social plays that will keep us alive that much longer....and save out butts from being voted off the island. Without us..that religious alliance has little else to look to but themselves for the next victim. The Evangelicals and Tea Party crowd against the Catholics...against the  Mormons....against Jewish people....and all of them eyeing the Muslims.

This is elementary school logic. I am not a historian. However, I draw this opinion from the understanding of these issues that my own school teachers imparted to me. I don't think there was a single fourth grade elementary student who didn't walk away from  lesson about the Pilgrims or the bill of rights without understanding that government and religion stand apart for very important reasons. Its just sad that our elected officials don't remember that history lesson themselves as they seek to enforce their brand of morality on the world. Maybe its time for them to go back to school....for those who don't remember history are doomed to repeat it.

The notion that America is a Christian nation, and that Christians must battle to take it back is the very basis for their culture war. And I fully believe that culture war is an idea who's fifteen minutes of fame should have been up fifteen minutes ago. Otherwise, we will tear ourselves apart...and where do we flee then?