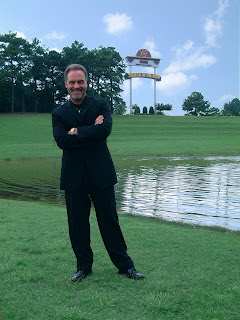 Religion and Christianity in specific seem to be undergoing an upheaval the likes of which I have never seen before...and much of it seems due to national debate over gay issues. The evolving Eddie Long situation and George Allen Rekkers scandals just being two of recent memory. But in both cases, these men were outed against their will. It has been the pattern of influential politicians and religious leaders to come out only after having been caught with their pants down...literally. After the denials...after the tears, we find the admissions that they had been gay all along.

On the positive flip side and on the heals of the "It Gets Better" testimony of Randy Roberts Potts...grandson to Iconic Evangelical, Oral Roberts...comes a Mega church leader coming out of the closet. Claiming the rash of LGBT teen suicides and prompting by his ex wife, Jim Swilley of "Church In The Now" in Conyers, Georgia has blown the doors off his own closet...and he did so with grace and panache.

Having watched the televised outing nearly in its entirety(nearly two hours worth), I can honestly say that its is in incredible and moving admission on his part that came from a very real part of himself. It is an act of integrity that I could not help admire because the video I post here is his first public acknowledgment to his congregation...in it you see congregants get up and leave the service. He also acknowledges losing the backing of many friends, colleagues, and affiliate ministries....He is giving up a lot to make an admission that he claims was brought about by the news of so many gay teen suicides.

It amazed and inspired me...I hope it will you too. Like many, I had not intended to watch the entire thing, but ended up doing exactly that. His coming out begins at about the 9:30 mark...

This was an amazing moment to watch and In the wake of news that retired military Chaplains had signed a document to the Pentagon threatening to remove support from our troops if Don't Ask Don't Tell is repealed, it reminds us that religions can be home to just as many people of integrity as they are to wingnuts and culture warriors.

And a note to closeted politicians and down low pastors...this is what coming out with integrity looks like. These are the consequences. For all that Swilley will lose for coming out..I believe that he will survive and thrive. Losing what portions of his ministry he has is insignificant next to the everything we would have lost had he been arrested hiring prostitutes or propositioning his flock.

He has my admiration and support....Now off to bed to get rid of this nasty cold so I can trick or treat with the kids tomorrow : )

Email ThisBlogThis!Share to TwitterShare to FacebookShare to Pinterest
Labels: Church In The Now, coming out, Jim Swilley, men of integrity, religion