DADT...Ding Dong The Witch Is Dead? 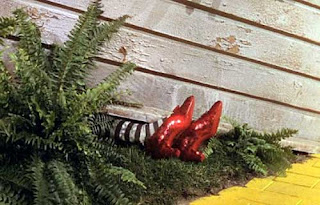 Well Dorothy. its true...In the Log Cabin Republican suit against Don't Ask Don't Tell, Federal Judge Virginia Phillips not only ruled that the policy was discriminatory and unconstitutional...she went and dropped the house on it by ordering the federal government to cease all investigations and discharges effective immediately. ....*shock*....*awe*....cue Glenda the good witch...

Wow...its like that moment in the Wizard of Oz when the witches legs curl up leaving behind empty stockings and a gently worn pair of ruby slippers. I stand here dumbfounded and waiting for munchkins to start dancing and singing while a little girl steals an old ladies shoes and flees the scene of an accident. But whats next?...and what of the announcement that the Department of Justice intends to defend DoMA?


Our journey still has so far to go. The Department of Justice still has 60 days to file its paperwork in opposition to Judge Phillips ruling and everyone watches with a jaundiced eye expecting it that ax to fall at any minute....Especially in the wake of the DoJ's announcement that it will appeal the verdict in the two court cases coming out of Maine ruling DoMA unconstitutional. Some advocacy eh?

You wont find a gay blog on the Internet that isn't simultaneously elated about DADT and spitting nails over the DoJ's decision to defend DoMA. It's been said that the DoJ feels as if it is merely doing its job in defending the current laws, which would normally be its functions. However, in the wake of the Presidents promises to advocate for the LGBT community, those sentiments ring hollow. It seems that if the President were really serious about his opposition to these policies than doing nothing would be the better course right?

Now...I'm not a legal expert...this is just my opinion on the matter:


It has been put forth that appealing the Maine federal courts decisions may be a part of a larger strategy. Its argued that the ruling, if allowed to go unchallenged, would only effect the citizens of Maine. Appealing the decision..and failing to overturn it..would mean the ruling would then effect a wider scope of people, just like the Prop 8 trial is doing as it winds its way up the ladder of the Federal court system. This is seen by some as a possible intentional strategy by the White House. To me, its reaching a bit too far for meaning where none may exist.

If the ruling were allowed to go unchallenged then...yes, it would only effect the citizens under the jurisdiction of the federal court that issued that ruling. However...as in California, it also creates a section of the populace that have rights that others do not.  It also creates a situation in which DoMA has been challenged...and failed. If the DoJ had just let the ruling stand then other states could have filed their own suites based on the precedent created in Maine and DoMA would have suffered a cascade failure. DoMA would have gone out like the Wicked Witch under a pail of water...what a world... 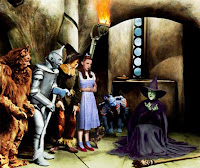 When it comes to DADT, there is no larger class of people that could potential benefit from an appeal. The verdict rules that the the policy is discriminatory to ALL soldiers serving..even though the DoJ did attempt to limit the ruling only to members of the Log Cabin Republicans. So fighting Judge Phillips ruling would be from no other stand point than a desire to see DADT remain in place, which would be counter to statements made by President Obama that he opposes the policy. It would be a definitive statement of this White Houses actual stand on gay rights. I suspect there will be much noise made about caution and implementing a repeal correctly through the legislative process....yeah, because that has worked so well for us already. Pay no attention to the man behind the curtain indeed...

*update* And cue the monkeys...here is the latest from Secretary of Defense, Bill Gates on the ruling:

"I feel strongly this is an action that needs to be taken by the Congress and that it is an action that requires careful preparation, and a lot of training," said Gates. "It has enormous consequences for our troops."

Truly it does..none more so than the to gay ones who've had to endure the invasions of privacy, the lying, the witch hunts, the shame and embarrassment of dismissal, the forced outings, the loss of their careers, and having their service and sacrifice treated with contempt by their government, among the many other grievous effects of this policy.

*further updates*...Here it is...The White Houses acknowledges that the Department of Justice intends to appeal the Don't Ask Don't Tell ruling...and they want you little dog too. Man I am sooo done with these people. They are not out to help us at all......go get that pale of water..Its time to give this witch a bath.

However long it may be until we see the injunction on military dismissals itself halted we can still celebrate as we look with a cautious eye to the White House. A very good thing has happened that will have massive ramifications to a final repeal of Don't Ask Don't Tell. We will accept no more half attempts at allowing gays to serve openly in the military...we will accept no more half measures of equality. DADT was a compromise in its inception...the Presidents plan to repeal DADT is also labeled as a compromise and has been just as successful as DADT itself in that regard. Its time to stop going halfway...we are following this yellow brick road through more trials and tribulations. We will have to face false wizards, wicked witch's, and tons of flying monkeys....but we will follow that road all the way home....so grab Toto and start clicking those heels Dorothy....
Until next time dear readers... 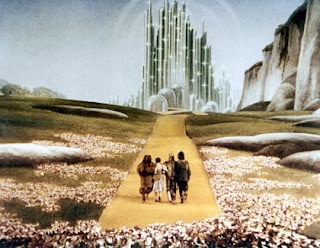