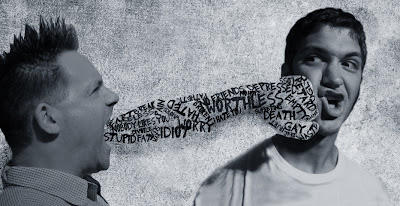 When you hear the terms "No homo" and "That's so gay", whats your emotional response? If your of a certain age, these terms are relatively new and maybe they don't resonate with you so much. At least, not to the same degree as words like fag or queer can. Words have such a curious power to illicit an emotional response from us but they only carry the meaning that we give them...or do they?

This weekend my husband Jay made a video about what he perceives to be homophobic actions on the part of a huge YouTube channel, The ShayCarls. Among the points brought up in that video were their use of the "terms "no homo" and "that's gay". Now...it is not my intention to make this post about the video or the ShayCarls. What I want to address were how many people vehemently defended their use of "no homo" and "that's gay". I was absolutely blown away by the amount of people...gay people even...who said they could care less about it....even from a guy who says he didn't want his kid to "turn out gay".

I do not like the phrase "that's gay"...at all. However, I was on the fence about "no homo" because it just sounds so stupid and makes the speaker look like an idiot. For that reason I tend to ignore stuff like this because it just showcases that persons lack of understanding about others. That is until Jay brought up some very good points that have forced me to reevaluate these seemingly casual words....

When someone says "that's so gay", we know that it means that they didn't like whatever it was they are are talking about and that the subtext to that is that being gay is also bad. That's a pretty cut and dry scenario. Yet with "no homo", it's almost so goofy as to be beneath comment..at least in my opinion. The men that are so afraid of being perceived as gay that they have to use a disclaimer to justify their actions clearly have some insecurity issues. The intention is to distance yourself from suspicions of homosexuality. However, any guy who comments on another guys hair or body and then quickly throws out "no homo!" isn't dispelling any suspicions. The fact that you needed to say it just makes it all the more suspicious in my book. In the end it's another way of saying that gay=bad.

But its all sticks and stones right? I mean who cares if someone uses those words...especially a channel who's sole focus is humor and entertainment like the ShayCarls? I can't tell you how man people commented...often in blazing capitol letters....CAN'T YOU TAKE A JOKE?!!!!    Why yes, we can, but thats not the point here. What if we took the homo out of "no homo" for a second and plugged in another minority group? I wonder if people would be so ready to dismiss it then. If someone runs around saying "no Jew!" or "no Asian!" I bet everyones undies would be in such a twist about it that the outrage would make the evening news. Yet, when the subject of the joke is gay we are all just supposed to laugh it off as innocent fun. I think that it's because its still ok for people to make fun of gays in a way that it stopped being ok to make fun of other minorities a long time ago.

Humor points out the silly and absurd in all of us. You should be able to make fun of yourself and laugh at even the most serious things in life or else we would all break under the strain. Being able to laugh at it all makes it bearable. But humor crosses a line when it starts to paint others as "less than". Just ask Tracy Morgan who is still trying desperately to save his career after he did a stand up bit in which he claimed that if his son was gay he would stab him....plenty of audience members laughed at that too and more then a few people stood up to defend Tracy on the basis that it was all a joke.

So can I take a joke?...you bet. But when that joke sounds startling like all the times you were called a fag in the hallway at school or under much worse circumstances...and when those who really do hate you use those jokes as licence for their hatred and violence, you realize that humor can have unintended consequences and that our words do matter. 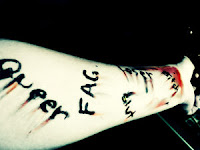 In addition to those are the young people who make the claim that they are a new generation and they don't care about phrases like that..."they just don't matter to us" was the gist. Fine then....I guess we really didn't need to make all those "It Gets Better Videos" for the teens who were hanging themselves for being called fags then right? They obviously didn't care about it either right? The argument that these are common phrases that don't mean anything just cheeses me off. The whole "it doesn't affect us" line is complete B.S. and here's why....

Not everyone who realises they are gay handles it the same way. This is because peoples emotional make-up is unique to each individual. Some people can realize they are gay and shrug off their friends "that's gay! or "your such a fag!" comments...others take them to heart and end up sending me messages on YouTube and
Gmail on the edge of suicide. I was just the same as many of those kids. Every time you hear someone get called a fag, you would silently vow to yourself that they would never say that about you...you would never give them a reason to just out of self preservation. This is because you believed in your heart that "gay" was a bad thing and could get you very hurt if people knew about you. "That's so gay" and "no homo" send the exact same message as "fag" and "queer", just in a more subtle way. I have enough emails from kids on the edge of suicide to know that its not one comment that drives us to hate ourselves...it is the aggregate of every time we have to hear it from our friends, family, and society at large that leads people to hate themselves to the point of taking their own lives.

To be fair...hearing someone say "fag!" is not the same as someone using "that's gay" or "no homo". The intention of the person using it can be very different. But when you know that its being used to look down on someone...even subtly...what's the difference? And how do we chose to respond to it? When you hear someone say the "F" word you can either put your head down and pretend you didn't hear it or you can stand up and give it back tenfold. Is it possible that giving certain people a pass on using denigrating gay jokes is a little bit like putting our heads down and pretending we didn't hear it. It's not important right?

In the end they are only words...they only have the meaning that we give them. But words are also tools that communicate more than what they may seem on the surface. They have effects that sometimes we don't intend. But I turn it over to you now readers....let me know what you think? Is it homophobic to use those words, ignorant,...or both?  Or as some claim, does it really all not matter? Is it generational...or is that the B.S. it sounds like? I think you know my opinion, now I would like to hear yours. 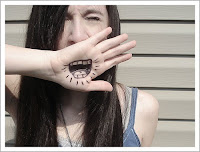