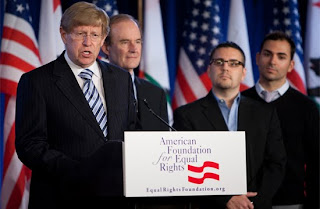 In a recent edition of Bill  Moyers Journal, Moyers sat down with David Boies and Ted Olson attorneys representing two gay couples in the federal lawsuit against the constitutionality of Prop 8. Since no cameras have been allowed in the courtroom for the trial and in all likelyhood will continue to be banned for the closing arguments, its nice to see Olson and Boies and to hear their opinions on the status of the trail in person. Both attorneys seem very positive about succeeding, even at the Federal Supreme Court, an attitude that I find astounding as well as encouraging. So far there case has been very sharp so I have no doubt that they know their stuff.

PBS does not allow their player to be embedded in other sites so I had to find a little taste  of the interview to share with you. Below you will find a Youtube synopsis of the interview but to see it in its entirety visit PBS . The full interview is well worth the watch so I hope you will go to the PBS site and check it out.


Some of their thoughts on constitutionality...


BILL MOYERS: But you have surprised many people. As everyone knows, conservatives in this country have been clear that they are opposed to gay marriage. And the strong base of the Republican Party, the religious right, is adamant about this. And your own friend, your good friend former Judge Robert Bork. He has called same sex marriage a judicial sin. And he said he can't even bear to talk to you about this case. Now, if he should say, "Come over and let's have a drink and let's talk about it," what would you do to justify the position you have taken that he calls defending a "judicial sin."

TED OLSON: I would like to talk to Judge Bork about this, a man who I have great respect for, and whose opinions I would listen to. And, I think the more that people understand that gay and lesbian individuals wish to have the same loving relationship that other individuals do. And that Proposition 8 in California says their relationship isn't recognized by the state. The harm that that does to those loving individuals, who are our fellow citizens -- they are our doctors, our lawyers, our neighbors, our friends, our coworkers -- we are doing great harm by discriminating against people.


And I think the more people hear what we have to say, what David and I have to say, the more people will understand that. That's one of the wonderful things about the fact that we have come together. Because people will ask the question that you've just asked. And other people will ask, "Why are you doing this? What is your explanation?" And gives us a chance to explain the damage that's being done by discrimination, and the great burden that would be lifted if we finally stop.


BILL MOYERS: But might not Judge Bork counter that you've joined with this liberal elitist here to find in the Constitution another new right that really isn't there?


TED OLSON: We're not advocating any recognition of a new right. The right to marry is in the Constitution. The Supreme Court's recognized that over and over again. We're talking about whether two individuals who will be -- should be treated equally, under the equal protection clause of the Constitution. The same thing that the Supreme Court did in 1967, which recognized the Constitutional rights of people of different races to marry.
At that point, in 1967, 17 states prohibited persons from a different race of marrying one another. The Supreme Court, at that point, unanimously didn't create a new right, the right was the right to marry; the Supreme Court said the discrimination on the basis of race in that instance was unconstitutional....


...There are certain rights that are so fundamental that the Constitution guarantees them to every citizen regardless of what a temporary majority may or may not vote for. And remember, what Ted said is very important. Nobody's asking to create a new constitutional right here. This is a constitutional right that has already been well recognized by the Supreme Court. And what the Supreme Court has said is that even a democratic-elected legislature in Wisconsin cannot decide by majority rule that marriage scofflaws. People who don't pay their child support, who abuse their children, abuse their wives, cannot get remarried again.

Ted Olson addresses why he thinks the time for marriage equality has come...


BILL MOYERS: But as you both know, some leading gay groups were opposed to what you have done. They argued that the country was not politically ready for this kind of judicial decision. And they said they need more time to win over the public opinion, state by state.

And if you go to the Supreme Court and lose, you will actually set back the cause of equality in marriage for years. So, my question is, why did you go against the wishes of so many in the gay community who didn't want you to do this?


TED OLSON: Well, and there are several answers to that. In the first place, someone was going to challenge Proposition 8 in California. Some lawyer, representing two people, was going to bring this challenge. We felt that if a challenge was going to be brought, it should be brought with a well-financed, capable effort, by people who knew what they were doing in the courts.


Ted Olson's response when asked by Moyers about what he felt was the most effective arguments that Prop 8. defense attorneys made...


TED OLSON: Well, let me say something. I have great respect for him. He's a very fine lawyer. And he had a very fine group of lawyers and they were doing their best. You asked me the most effective thing that happened on the other side? I will, I didn't find any of their arguments effective. I have said from the beginning of this case, I've yet to hear an argument that persuades me or even comes close to persuading me that we should treat our gay and lesbian colleagues differently and deny them equality.


But what really happened, which was a very eye-opening event, during the course of the trial, during one of the earlier proceedings. The judge in our case asked my opponent, "What harm to the institution of heterosexual marriage would occur if gays and lesbians were allowed to marry?"

This went back and forth and back and forth. The judge kept wanting an answer. "What damage would be done to the institution of marriage if we allowed this to happen?" And my opponent said, finally, he had to answer it truthfully. He paused and he said, "I don't know. I don't know." That to me sums up the other side. They say the traditional definition of marriage, but nothing by allowing the two couples that were before the court or others like them to engage in a relationship with their partner where they can be treated as an equal member of society hurts your marriage or my marriage or David's marriage or any other heterosexual marriage. People are not going to say, "I don't want to get married anymore if those same sex people can get married. That's not going to happen." There is no evidence to support a basis for this prohibition.

Olson and Boies on gay families and why marriage equality helps our children...


BILL MOYERS: One of the opposing lawyers, and I can see why he would say this, credited the two of you with putting on a spectacular show. But he said your evidence was irrelevant. Quote "The best thing for a child is to have both a mother and a father. A same sex couple couldn't offer the same benefits as a mother and a father." That, he said, is the case.

DAVID BOIES: There is no evidence, no evidence. They couldn't point to any. And all the evidence is to the contrary. As to whether heterosexual couple raises better children than a same sex couple. The evidence, the scientific evidence has been studied over and over again is that what's important is to have a loving, stable, two parent family.


TED OLSON: The leading expert in the world about welfare of children from Cambridge-


TED OLSON: -testified that children do as well in a same sex environment, where both of their parents are the same sex, just as well as opposite sex parents. And it's important to recognize California recognizes the right of same sex couples to live together, to have children, to adopt children, or conceive of children in various ways that are available these days. There's 37,000 children or something.


TED OLSON: In California with same sex couples. And the evidence shows that those children are doing fine, just fine. Compare an opposite sex couple with an abusive father. With a same-sex loving couple. Quality of parenting is not based upon gender or sexual orientation. It is in the quality of ones heart.

And when asked the really tough questions about what they are likely to face when this case reaches the U.S. Supreme Court?


BILL MOYERS: So, if you go to the Supreme Court, Ted, you're going to run smack up against some of your best friends. I mean, as you know, when you mentioned that 2003 case, when the court outlawed Texas laws against sodomy Justice Scalia issued a strong, some say virulent, dissent. And he said that this decision effectively decrees the end of all morals legislation, and would lead to sanctioning same sex marriages.

He went on to accuse his colleagues on the court of aligning themselves with the quote "homosexual agenda." Let me read you this. This is from Justice Scalia. "Many Americans do not want persons who openly engage in homosexual conduct as partners in their business, as teachers in their children's schools, or as boarders in their home. They view this as protecting themselves and their families from a lifestyle that they believe to be immoral and destructive." How, if you get to the Court, are you going to deal with your friend Justice Scalia?


TED OLSON: Well, and let me say that I have enormous respect for all of the members of the United States Supreme Court and I've had wonderful relationships in one way or another with all of them. So, it's, my friends are not on one side or the other. Secondly, Justice Scalia, he writes beautifully. And he has passionate, powerful views. But he lost. And he went on to say in that very opinion, "If we decide this case that way, what's to prevent same sex marriage from being held to be a constitutional right?" Well, he's right.

Well...lets hope these gentlemen are right as it seems they litteraly hold our fate in their hands. It appears that they have their sights on playing for all the marbles. not stopping at California. It doesn't make me feel any less uneasy about the possibilities that we face going forward..but at least it helps to know how long the journey may be. ....Fasten your searbelts. Its going to be a bumpy ride.
Posted by GFV at 2:18 PM