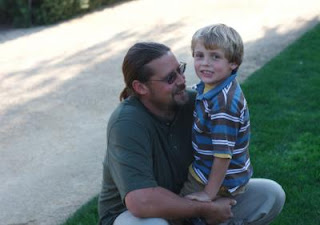 Today these keys fail me...my heart fails me to find the words struggling to get out.


This morning I woke up to Jay telling me that he had bad news. My friend Dave...who earlier last year had come out to me as transgendered...had commited suicide. Dave was like my brother. All I am left with right now are memories and a wondering why.


The last time I had talked to Dave he was doing well. We were reconnecting after years of living our own lives. During our conversation he told me about the difficulty of facing his decision to transition to a woman...rather not the transition itself but deciding to make real what he felt was an overwhelming imperative. At that time he nearly attempted suicide and he told me, "it was either transition...or kill myself". and so, he embarked on his journey to become Carina.

Changing genders is no small task and it requires extensive counciling and doctor approval. Well,....Carina being herself...had been obtaining the hormones over the internet and had begun to transition herself. She never was a cautious one...she rushed in not only where angels feared to tread...but where they has also barricaded the door and put up big "Danger! keep out or else!" signs. But such was her need at the time. She did eventually get that doctor approval..and had begun transitioning under medical supervision.....none of this is what led to her decision to leave...it just shows more clearly how fearless she was

and yes...I will go between male and female pronouns...I feel caught between my memories of him and the "her" she was becoming.

Prior to making this decision Dave removed his blog, closed down all his facebook pages, updated his will, and methodically tried to close down his affairs...but guess what Dave? You can't take down my memories. Those are mine. I remember the weekend you, I, and Kirk climbed into that tiny Volkswagon bug that was a drafty little deathtrap and drove out to the coase. I am ashamed to admitt that I can't remember if it was your grandma or kirk's who had died. I just remember it was tragedy that drove us to the coast that day. We were coming around a bend of twisty coastal road when we saw a huge devil on the side of the road...big red wings and all. and he was masterbating while onlookers took pictures. (No this is not an acid trip readers. It was real. A man dressed up in costume as a part of some publicity thing but we didn't know.) All three of our jaws dropped as we sped by. I remember thinking, "well now I can die because I have officially seen it all." How little we knew then.

I remember 1a.m. drives to the coast listening to Adrien Belew or the B52's. One night near bodega racing down the rural roads to fast to be safe with "planet claire" on the radio....I wouldn't have been surprised had we been actually kidnapped by aliens on that night....or if we had crashed and our bodies not found till morning...we were so reckless.

I remember the ONE time I let you drive me car you crashed it in an open field with barbed wire all around it. That car never recovered though our friendship did.

I lost you for a while as we went our separate ways and built our families. Me marrying my husband and adopting two kids and you, married with two boys of your own. You become a grown up. Much time passed Then I found you again and we started to catch up on our lives as adults. When you came out to me as transgendered and talked about the steps you had taken in transitioning, I had never heard you more happy. I hopped that this would be the answer to all you had been searching for your whole life. I hoped this would end the sadness, rage, depression, and chaos that marked our younger years.

I'm not angry. Please don't ever feel that way. I love you too much. I just hope that all that pain is gone. I hope that in the adventure of whatever awaits you beyond life...that you don't forget about us.

I know that Dave thought long and hard about this decision. He closed down all his life on the internet ...his facebook...his blogs...and attempted to put things in order before he left. While Dave was happy with his decision to transition...his family was not. End the end it was the fact that he was losing his wife and kids that became his reason to go. Not the past, not the hormones or transitioning. It was that he couldn't live keep those he loved in his life and transition. those are the hard choices that people have to make when they come to terms with being transgendered. You face the very real possibility of losing those you love. That was too much for Dave/Carina to bear.

This is not a judgment on his family. I can understand why she felt the way she did. I can't say that I would do any differently. Nor do I defend Dave's decision...I wish fervently that he would have called me. I blame myself for losing touch with him again these last couple of months. If I was talking to him...maybe I would have known and been able to help him deal with the reality that, if he really needed to transition, he would have to let go of his family for a while....but not forever. I would have told him that it was going to be o.k. But I wasn't there and now he isn't either.

I know why he didn't reach out and call. Who was going to be able to fix what was wrong? Could I make his wife take him back as a woman?...no. Could I change the way he felt about transitioning?...no. But that didn't mean that he couldn't have gone through that dark night until another dawn broke and he could begin to build a new life with his family on new terms. Instead, it became just one straw to many and he couldn't carry the load anymore.

Too my readers who know someone transgendered. Please don't take their struggles for granted. We can't solve each others problems...but the alternative is to lose those we love because they can not bear the burden alone. All it takes is a willing listener....I wish I had been a better one.

I know this post rambled....I am sorry for that....I put what I had on the page the way it came out. Please go tell someone you love them today.
Posted by GFV at 10:30 AM