Is The World Changing? 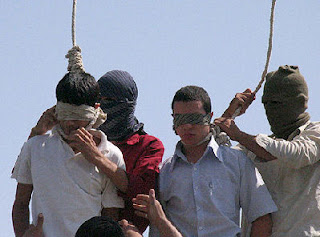 Yesterday this blog had the honor of hosting a video of one young boy who all gave us hope for the world. I wish that feeling could have stayed for more than 24 hours...sadly, the realities of the world come crashing back to remind us that while hope exists...so does tragedy and that their are those out there who still need our help. That help may take many forms...as with the earthquakes in Haiti and Chile, blankets. food, and medicine were real ways that we could reach out and make a difference. And sometimes ...the only way we can help someone is to bear witness to what happened and let the world know that we are watching. Such is the case with the video of a Saudi man who was videotaped, dressed up in a police uniform and pretending to be an effeminate police officer pulling over a motorist. He then proceeded to imply to the pretend motorist (and camera man) that he could escape his situation by offering "comfort" he then bared his chest and fondled himself to music. Well....Youtube being what it is, the video went viral and got back into the hands of  Saudi authorities. Both men have since been arrested. Watch the video and read on below the fold.

watching this video all I could think of was, "these men have signed their own death warrents". That may be a sad thing to think about, but its the reality of the world in so many places in our world. While Uganda struggles with public outcry over their "kill the gays" bill, other nations just kill their gays with not a whisper to tell that it happened....and just like that, so many gay and lesbian people just vanish from the earth. Who remembers them? Who tells their story so the world knows what happened? Or will it be another chapter of of our common lives as GLBTQ people hidden or destroyed as if we were never really people at all? Beat us, jail us, kill us in the streets and celebrate the event, then never talk about us again.....so we are lost to time... unless someone sees and tells the tale.

To help explain the weight of the sentence these men will endure, one of Queerty's readers, Terrwill, left this comment (not posted in its entirety):

In Iran a few years back two Gay teens were sentenced to lashings same as this guy. The body can only sustain max of 50 lashes per session because the flesh and muscle are literaly ripped from the body.So the cycle of torture goes on for months…and consider they are not sent to a hospital bed to "recover" it is a filthy prison cell. The two Gay teens were about finished with their punishment and suddenly "new charges" were filed accusing them of child molestation. Interesing because they were 14 and 16 when arrested. After another "trial" they were sentenced to die by hanging. The "compassionate" way to hang a person is to place them atop a trap door with the noose around their neck then open the trap, the body falls and the neck is snapped. Immediate death results. These kids were placed upon a flat bed truck which then drove away slowly ensuring a slow torturous death by suffocation. In front of a cheering mob of thousands…….


If you haven't had a meal yet and want to see some of the most reprehensive displays of what subhuman savage scumbags did to these two teens check this link out:

The teens he refer to are the ones who's photo are at the top of this post. According to the sources listed in the this link over 4000 lesbians and gay men have been executed since the Ayatollahs seized power in 1979....thats only in Iran.

I hesitated to post this....Partially because some may view the video and only see its content and not the greater context of the society in which it was made. The video by itself is standard Youtube clowning...but taken within context I have to wonder what motivated its creation. Was it just the belief that it would never be connected to them? That would be odd because his face is front and center for the entire video. Then perhaps he's attempting to make a statement..his own form of activism?...I don't know. All I do know is that these two men are probably not long for this earth and they should not be allowed to go quietly. And though we don't know their names..nor will they go anonymously.

What we can't stop we can remember and bear witness...so that one day their stories can be told to a generation that wonders how the gay culture they inherit came to be...what it was like to be gay in our times...or if there were others like them and what happened to them. Who were we? Our lives should not be erased, both because they have as much meaning as anyone elses and because one day anther generation will look back at us in order to figure out where they came from....and hopefully unlike us, they will be able to know instead of finding history with torn out and burned pages.

I feel helpless watching this. How do you face this or find any level of understanding? That sometimes horrible things happen here for so many pointless reasons. This song by Lisa Shaw guided my heart as I wrote and I dedicate it to those who we have lost and who continue to suffer. I hope it is not taken as tasteless. to me it represents that moment of calm when you have cried every tear you have to cry. It is a song for suffering and rememberance....and survival.

*! In an aside that links to the theme of this post.. An argentinian judge has nullified a marriage between two men performed in the capitol. The marriage in question was the second performed in the nation to my recollection (and without fact checking). It just goes to show that as long as legislators and judges have a loophole through with to thread their bias, they will use it...again and again. Equality then becomes the revolving door instead of a step forward. I think its time to start burning our closets to the ground rather than be put back in them again. This giving rights and taking them away crap has got to end.
Posted by GFV at 11:37 AM