The Arizona Shooting and The Politics of Revolution 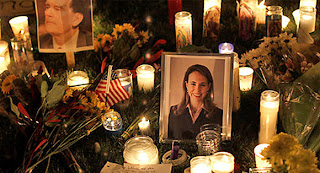 The victim of attempted assassination, Arizona Rep. Gabrielle Giffords clings to life in an Arizona Hospital. Nine other people are dead including a nine year old girl, Christina Taylor Greene...
And we are all looking for meaning...
What drives another human being to commit a crime like this? The assailant, Jared Loughner's mental illness has been given as the likely cause and anyone who has seen his YouTube channel would be hard pressed to disagree. Jared seemed to have the idea that all politicians where part of a giant scheme to control the populace through certain concepts that he obsessed over...like, the meaninglessness of words and currency. While I am still unsure what he thought of as "currency" it was clear that he had gone down the rabbit whole to the point of paranoia.
Yet, all that was on anybodies lips the day after was Sarah Palin's political action map...you know, the one covered in cross hairs?...the same map in which one of those cross hairs includes Gabrielle Giffords name and district, prompting speculation that her map may have provided Loughner...and any one else with an itchy trigger finger...a handy hit list. Viewing Loughners video is chilling but one thing it doesn't include are specific names or political parties. He seemed to have a problem with the entire system.
Whether the map and Loughners actions are connected have become almost irrelevant at this point as one of the effects of this horrible event is that we are talking about the negatives of engaging in "culture war". Sometimes its not just a way of words...sometimes it's real bullets....and who owns the blame?

The tone of American politics has been off the charts on the hysteria meter for some time now...making the political climate of the last twenty years look like a cross between the McCarthy era and the Salem Witch Trials (art thou or have thou ever been a liberal?). Language is employed daily that implies that other Americans with a differing viewpoint are actually socialist sleeper agents bent on destroying the freedoms of Americans to not give a rats *ss about anyone else. A good example of this was the health care debate. Instead of talking about the realities of our very  broken health care system, the debate was allowed to devolve into hysterical claims of "death panels" and FEMA coffins....and don't even get me started on gay rights and the fact that the right is convinced that Obama is "homosexualizing"America...even though we have often had to fight hard to get him to recognize that we even exist. None of that matters when you have a crowd to whip into a anti-gay voting frenzy.
I have written before about growing up in a conservative home and watching Rush Limbaugh slowly brainwash my family into being fearful of every shadow that wasn't as patriotic as they should be. Everyday was filled with hours and hours of railing against President Clinton and accusations of all kinds, including selling America to China. Then, it was Clinton who was the Anti-Christ...quite literally. It wasn't until I moved out on my own that I understood. It was like stepping out from under a storm cloud and feeling the sun for the first time....none of the fear Limbaugh was spinning was real. My family believes it is though and they still live as if government is infested with individuals bent on destroying the country. these are people that vote...and they are fully invested in the culture war. Any political conversation with them ends in talk of how fed up people are with having socialism shoved down their throats and how it will one day lead to  revolution.....thank the pundits for that.

Last August I wrote about how advances in gay rights were causing a violent backlash to begin to erupt. At that time  this image was floated around the Internet as the solution for gay marriage: 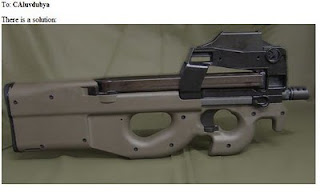 ...and today Box Turtle Bulletin also discussed the roll of rhetoric in the Arizona tragedy. To support their argument they posted an example of this billboard for Rush Limbaugh as a "straight shooter": 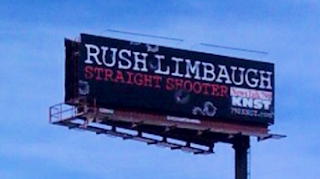 and also last August...Maggie Gallagher in her response to prop 8 was quoted(PHB):

American politics are in a quasi-revolutionary phase.


The people, symbolized first in the eruptions of Tea Parties, are rebelling against elites who believe they can ignore our voices and our values.

Even Giffords was no stranger to the simmering violence of current politics(HuffPo):

Giffords, 40, is a moderate Democrat who narrowly won re-election in November against a tea party candidate who sought to throw her from office over her support of the health care law. Anger over her position became violent at times, with her Tucson office vandalized after the House passed the overhaul last March and someone showing up at a recent gathering with a weapon.

ah yes....the Tea Party. The party that attempts to co-opt the imagery of the American revolution in and attempt to brand itself as patriots and any one else as not. You called out the President...you spit on gay politicians...you shouted out the evils of the socialists in Washington. You rattled your sabers and brought your guns....Now that a good portion of you have won election to office it's funny how many of you have become just like the elitists you railed against...Hands down the lamest revolution...ever.


And when someone actually starts shooting...like Laughner did...how fast do you think these people will run to disavow and separate themselves from the bloodshed...microseconds?

So it's clear that America is "ground zero" for rhetoric, fear, and the politics of hatred. The language of war has been part and parcel of it all. For a culture war to exist, there must be a threat to mobilize against...and if you can equate liberals, gays, and minorities with communism, socialism, or a dictatorship you have the makings of an effective campaign...until somebody starts shooting...
So is Sarah Palins map directly responsible for the the shooting of Gabrielle Giffords and those who didn't survive?....no. I think that began and ended in the mental illness of Jared Loughner. But how long until it isn't? The ground has been laid...the stage set. The next person to go on a murderous rampage may see themselves as a patriotic hero and defender of the faith...much as Laughner saw himself as the only person who could see through what he felt was a cosmic lie. The difference between those two motivations is infinitesimal.
One of Jareds videos highlighting his frame of mind...

Perhaps we should take some responsibility for this instead of continuing to cast each other as the biggest evil the nation had ever known. Today...Sarah Palin referred to it as "blood libel" when it was directed at her, even though her campaign has often practiced it against others. The day of pointing fingers at our neighbors and labelling them as unAmerican has got to end or this tragedy will not be the last. It is time for all of us to step out from under that cloud now and say no to the new McCarthy's.