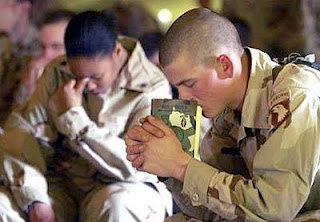 A recent report from Truthout and courtesy Pam's house Blend highlights an experimental military mental-health fitness initiative that goes by the name "Comprehensive Soldier Fitness". The Program, which is aimed at lowering suicide rates and Post-Traumatic Stress issues in soldiers consists of a Pair of online tests meant to measure a soldier psychological resiliency in five areas: Physical, Emotional, Family, Social, and...Spiritual. However, if a soldier scores low in  any category, they get assigned to "remedial counseling in a classroom or online setting". So if you don't live up to the tests standards of spirituality...you will be taught how to believe so you don't fall apart after experiencing the bloody realities of war.

Understandably, this has caused a backlash from soldiers and civil rights groups who point out that this program "unconstitutionally requires enlistees to believe in God or a "higher power" in order to be deemed "spiritually fit" to serve in the Army.". One of the programs initial designers was a psychologist who helped design the Bush Administrations torture program....if that tells you anything about the intent of the people behind this....and the obvious double standard of forcing something onto a group of people that is not inherent to them smacks of the arguments used against repealing Don't Ask Don't Tell. 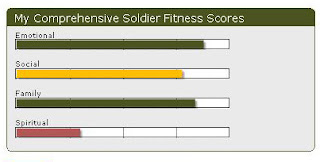 What bothers me about this the most is the level of childish discourse the gay soldiers and civilians had to endure in the repeal of DADT. Gays were predators who were going to assault straight soldiers in the showers remember? We were "forcing homosexuality on the military" and engaging in "social experiments" that were going to bring the military to its knees(literally and figuratively)...and other horsesh*te. Yet when it when it comes to religion they're all for experimenting away. Double standard much?

The Army has already required nearly 800,000 troops to take the exam and  the concerns from a  soldiers point of view is that there is no way to skip the spirituality portion if you are atheist, agnostic, or if the questions just don't reflect your personal spirituality. Even though Brig. Gen. Rhonda Cornum, Director of the CSF program, claims that the questions asked are meant to be more "spiritual" in nature and not connected with any particular dogma. However, most of the questions revolve around belief in a "higher power" and a connection to all living things as a measure of spiritual health and scoring poorly in this madatory exam means reporting for "spirituality training". Additionally poor scores could make you look bad in the eyes of your superiors and hurt advancement opportunities. Brig. Gen. Cornum claims that failing the religious portion of the test does not mean that a soldier must attend a spirituality training but that fact has not been communicated to soldiers taking the test.

Truthout gives the armies reasons for the program lie in..."teaching its service members how to be psychologically resilient and resist "catastrophizing" traumatic events." Why? CSF is...(emphasis mine)

aimed at reducing the number of suicides and post-traumatic stress disorder (PTSD) cases, which have reached epidemic proportions over the past year due to multiple deployments to the wars in Iraq and Afghanistan and the substandard care soldiers have received when they return from combat.

The armies intention is to train a fighting force that is more resilient when the truly horrible happens...but does faith make understandable seeing the horrors of war? When children are found burned over ninety percent of their bodies as secondary casualties...when the memory of all that is left of your squad after stepping on an IED might be too traumatic to face? Faith can help you...but it won't shield you from the utter damage that is done to a human psyche after seeing what really happens on a battlefield. 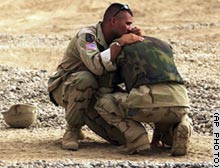 My own father has always been a person of strong personal faith and one who believes in God. He also served in the Navy during the Vietnam war. His faith did not stop him from being traumatized to the point of nightmares that left him crawling on the floor in the middle of the night, screaming out for long dead comrades in his sleep...dreaming about their deaths over and over again. I remember waking up in the middle of the night to hear him shouting and reliving the horrific events in his sleep. Over the years the dreams may have faded and if he continues to have those moments, he doesn't talk about them....and it's important to mention that his faith did help him keep going during years when he almost drank himself into suicide, but it did not shield him from experiencing the trauma in the first place.

Does the above statement mean that I don't advocate having a spiritual belief?...no. Those beliefs are very important to me. Nor does it mean that spirituality won't give you support or help you make some kind of sense in a world that can be full of such utter inhumanity and senselessness? In my opinion and based on my own experience...if its your belief and you chose it, it can help you immensely. However, I don't think forcing others to adopt a belief that is not their own in the misguided attempt to keep Post-Traumatic Stress cases down is right...nor will it work. If the problem is multiple and extended tours of duty then perhaps we should address that issue instead of asking them to pray harder. If the stress comes from being treated like a financial liability when they come home rather than taken care of for laying down their lives...then perhaps we can address that instead of leaving it to faith....so many men my fathers age survived the Vietnam war only to lose their civilian lives because they could not leave the war behind and because we did not take care of them. Many of those men had strong spiritual beliefs of their own.

In closing, if conservatives are going to denounce the open service of lesbians and gays as forcing others to accept what they can not because of their own religious beliefs (and the ignorant excused they offer up in place of those beliefs), then they should not be allowed the turn around and do the same thing to others without being called out for it. Also, there are better ways to deal with the affects that war has on our soldiers than to force feed them an unfair and  unwelcome spiritual belief system. Improving the V.A. system is a start, stop sending soldiers back to combat over and over again until they break down is another good step, and thinking twice before we start multiple wars is an even better one. Spirituality is for those that chose it and it is intensely personal...just like our sexuality. No man had the right to dictate how you live it. Just my two cents. 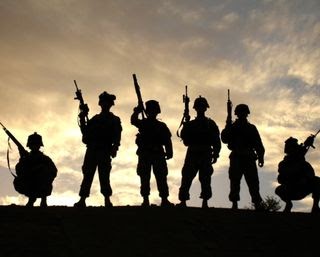