What Makes A Marriage?

Rewind back in time to last night...Jay and I were watching a gay themed movie recommended to us by a friend. The movie was awful, a crime against humanity in fact....so much so that I will not mention it's name for fear you will feel compelled to rent it and see just how bad it was. Needless to say, it was one of those movies designed more to create multiple opportunities to show off the actors butts than to create any shred of a believable plot. The movie, which hails from China, suggests that all women are merely accessories to men, that any man can be seduced into becoming gay, that all gay men have a secret heterosexual side,...and my least favorite theme...gay love ends in tragedy. After the movie was over, Jay and I were completely dumbfounded  and angry that we had wasted the time watching it. However, it did lead us to talk...about what we find sexy, fantasy, and attraction...and it was here that the second most horrible gay film of all time turned a bad night worse...

Conversations about sex and fantasy are an important part of any marriage. Having open communication with your partner or spouse is an important part of bonding and revealing our deepest selves to each other. Honesty and intimacy go hand in hand and can lead to some awesome nights in the bedroom if both of you are willing to be open. These are among the things that you hopefully iron out when you are in your first few months/years together. But, as time goes by we tend to think that we have said everything there is to say to each other. We think we know everything about our partners past, their sexual likes/hangups, and their attitudes to life. We think that we don't have anything new to give because we've covered every square inch of our past...as if we have reached some point of stasis in which we have not changed since we first made our commitments to each other.

Oh, how wrong I was...and it was in that conversation that we both learned that quite alot goes on in our private worlds...and that knowledge can be a shock all by itself. When you think you know all there is to know about each other...finding a new layer isn't always met with curiosity and acceptance. I made some admissions to being curious about certain things that surprised Jay...and not in a good way. He got angry I had not shared it with him sooner. I got embarrassed and defensive and just wished I hadn't said anything at all...so much for sharing. Anyway, after stomping off in a huff and acting like brats, we eventually came together again and were able to have the conversation we should have been able to have the last time around...and I learned some stuff too. It was quite the eye opener.

the point of dragging you into our tawdry little tiff wasn't to share the details of how we hash out our differences. Every couple that is together for a length of time learns how to work out their differences one way or another. It was after our fight was over, and for most of the next day  that I mused over how long you can be with someone and still not know all their is to know about that person...hell, that even applies to yourself. You might be able to finish each others sentences...she might pick out all your clothes...he might buy you the same schmaltzy thing every Valentines day...but there will always be more.

Sometimes that fact blows up as many marriages as it deepens. Like my own parents who had been high school sweethearts who knew each other for a long time before they married and had kids. Yet, the fact that we are ever evolving beings struck...and they learned that they wanted more out of life than to be homemakers or breadwinners and parents. They had gone with the script of what you do when your young and in love, only to discover that the people they actually were didn't fit the roles they had taken on. That was not a good realization to have then, and it lead to a bloody implosion of our family...not that that experience was unique to us, it happened to the families of many kids my age.

So what to make of this new knowledge?...


I've read that the most long lasting relationships are not necessarily the happiest ones but the ones in which we are continuing to learn new things from each other. Given what I experienced last night..perhaps that is true. Sometimes Jay and I drive each other stark raving mad...even as we do love each other...but we do continue to learn new things from each other. And just when you think you've gotten to the bottom of it all, you find a whole new universe. 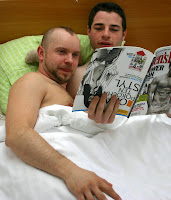 Is this what makes a marriage?...Maybe...but I defy the people who claim that gay and lesbian marriages aren't true marriages. Do we not suffer the same slings and arrows? I defy those who think that a man can't love a man, or a woman love a woman with the same depth, intensity, and commitment that men and women can love each other. Love isn't easy for any of us and it isn't Disney. Sometimes it's learning that we are not the people we thought we were, and that can be so much more than we thought, all at the same time. Sometimes, it's growing beneath the surface while it seems the rest of our life is standing still. It's amazing heights and epic fights. It can be wonderfull some days and infuriating the next. Sometimes it requires you  to push yourself to do what you normally would not...like stay and have that argument you may want to walk away from so bad you feel like your head will explode. Like life....love and marriage can be messy, complicated, and sometimes uncertain....And gay men and women stick it out with the same tenacity and heart of the best man/woman relationships out there.

While marriage may not be for everyone.... gay or straight. I can say for myself that I have not regretted one day of it. It isn't always easy, but it is an adventure...and I'm glad to have a someone to have those fights and make those discoveries with... 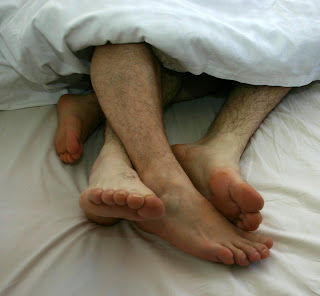