Religion, Deception and Our Political Landscape

One of the very first moral codes we learn as a child is "do not lie" I teach it to my children as it was taught to me, so many years ago, by my parents. This isn't an arbitrary moral precept but a practical way to aproach the world and our relationships with other human beings. I just told the "boy who cried wolf" story to my 4 year old daughter to help her understand that I need to believe the things she says, for a very good reason. What if she's hurt, in trouble, or in need? The ability to know that those are authentic needs are important (although I would be there no matter what). Honesty is a fundamental requirment for a healthy, functional family as it is for a healthy, functional society...

Dating myself a bit here aren't I? But put down your paint spattered sunglasses and stop looking for your Izod shirt or candies...this is serious. This song represented to me the current state of our political dialogue about gay marriage and points to a deeper and more disturbing trend.

The right often uses misinformation and distortion to create an emotional climate that makes people receptive to their message and tune in again and again to see if the sky has fallen yet. They have taken a people that believed in their country and convinced them that its all going to fall apart at any moment. mayby that true...I hear some disturbing things (I.E...civil war rumblings). But we expect a certain amount of that from the Rush Limbaughs and Sean Hannity's of the world. They are showmen, like the circus ringmasters of old, and first and formost they want to keep you interested in their product, which is their opinion. So there are no suprises when they spout half truths or deliberate misinformation because they want to scare us into staying tuned. They only have a platform as long as we watch.

Its religion that has got me scratching my head these days because its influence often writes itself on our hearts in a way that transcends personalties, trends, or cultural circumstances. Ask anyone with a healthy helping of Catholic guilt...

"But Bryan" you say, "Hasn't religion always been a source of conflict and strife in the world? How is their current behavior any different?"

Well, I guess in the sense that religion, as an organized body of human beings acting on their own agendas, thats very true, but not as the core of values I was raised to believe in. I think Traditionally, religious abuse refers to the men and women who have intentionally manipulated the spirituality of others to gain power or money. But do the folks behind referendum 71 in Washington State and Question 1 in Maine really fall into that category? Sure they are manipulating people with falsehoods that they now, indirectly, admit to...but I dont see the connection to money or power that is the hallmark of so many other religious abuses. I'm left to wonder if in fact people like Mark Mutty and Maggie Gallagher have literally drunk their own kool-aid. They believe in the cause so much that they are willing to go to any length to see it fullfulled. But how can they stand on a platform of wholesome values and literally lie to people about the effects of allowing gay marriage? Surely that means does not justify the end? Unless they themselves believe those lies themselves, which is the only option we are left with...deliberate lies...or deep denial.

This Leaflet image was taken from a recent post in "Pams House Blend" a blog I love to follow. Here is an example of some Washington States "reject 71" garbage: 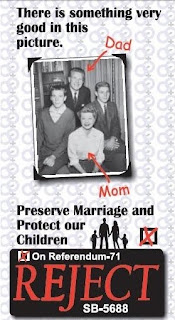 In this lovely picture from a great t.v. show we see the nostalgic America that is the Ideal of The "protct Marriage" crowd. The Problem...the two boys in the picture...Ricky and David Nelson...grew up to be quite untradional. Ricky Married his three month pregnent bride, Had three more children and then divorced her. His brother David followed suit. In addition to this the article points out the number of times the backers of the "reject referendum 71" campaign have been married and divorced themselves.....wow...you know...I dont want to make judgments on anyone...their life is their life...its where they attack my life that the gloves come off. If your going to stand up for "traditional marriage" shouldn't you be in your original one? What about their kids? Wheres their, in home, mommy and daddy?


They are fully aware that many of those people sitting in the pews on sunday will not look further for information on gay marriage then what their pastor delivers every sunday at the pullpit.

So the lies are being repeated...even by religous leaders who are supposed to espouse the truth. "they are going to teach kids about gay marriage!"...hogwash. "My church will be sued!"...balderdash! "good christians will lose their jobs!...100% pure cow poop. The Longer Gay rights exist in tollerant states, the more people can see their real consequenses. Conversely, The more mistruths about gay marriage and gay rights are repeated, the thinner they become and the easier for the common person to see through. By common person I refer to anyone that doesn't live on a constant diet of infotainment. So I ask..is it personal gain...or blind fanaticism that allows the use of lying as an acceptable practice?

Every week Mormons, Catholics, and many others are out there are digging into their already cash strapped wallets to give to their churches, that spend it on a political campaign. How many bibles could that have bought? How many blankets? How many meals in the stomachs of hungry children? These ordinary folk are rellying on their spirituall leaders to guide them, And yet here the church is...backing up organizations and individuals willing to lie to win an election...and they find that moral. Is it me or is that not adding up? Is this a fight the churches really want to pick? Its making them look less and less like a bastion of love and hope and more like great angry tyrants. How is that good for the health of religion in America?

And In what universe did Christianity(in any form) become the moral police for the nation? Nowhere in the Bible is it taught by Jesus that we are to impose our values...or what we percieve to be GODS values...on others? Will you find examples of that in the old testament? Sure you will. But , do you really want to live by Evrything in the old testament? If so I hope you are immune to stoning because you got one coming. Didn't he want us to chose him, not have him forced on others? Christianity was meant to lead by example...not political coersion...and certainly not by lies. "For I am the way, the TRUTH, and the light. No one comes to the FATHER but by me"...